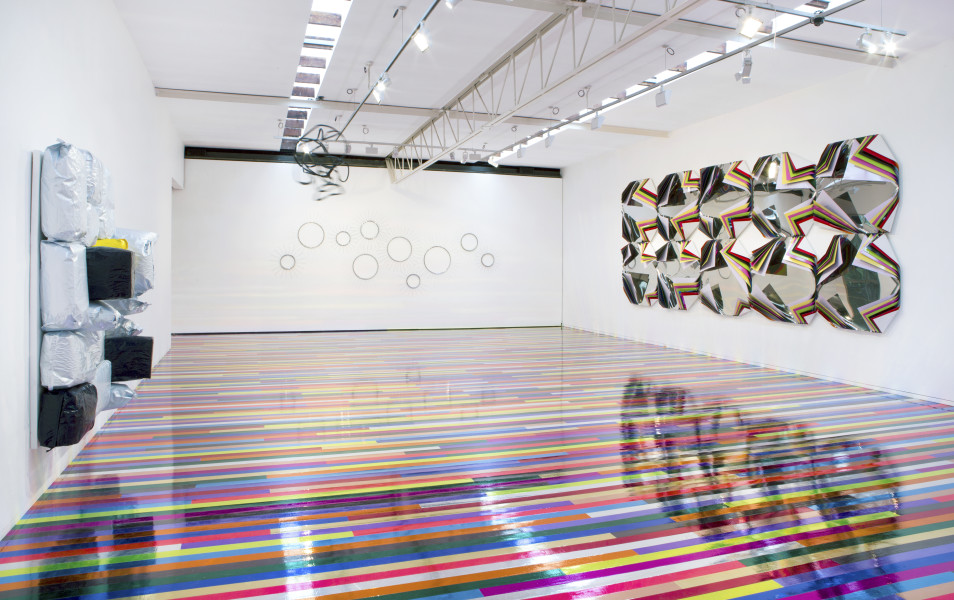 Viewing some of these works in sequence is a little like looking through an origami kaleidoscope. Colours fold out as flanges, revealing others shape-shifting underneath. Reflections move with you around the gallery.

Jim Lambie is one of the leading artists of his generation, and one of the most significant colourists to have emerged from his home city of Glasgow. Yet he does not apply paint to canvas in the method of his forebears, Samuel Peploe and J.D. Ferguson who worked in Paris at the time of Picasso and Matisse. Rather, he is an installation artist who also works in the expanded field of painting, an exponent of what Rosalind Krauss calls “the post-medium condition”. His artworks are three dimensional, yet they are totally about colour, and the psychotropic affect it can have on the viewer. The work on show at Roslyn Oxley9 Gallery, collectively named Zero Concerto after a piece of music by the Shuta Hasunuma Philharmonic Orchestra, is wide-ranging in style and influence and will give you a complete overview of the artist’s oeuvre. Viewing some of these works in sequence is a little like looking through an origami kaleidoscope. Colours fold out as flanges, revealing others shape-shifting underneath. Reflections move with you around the gallery. Other works, known as “The Potato Sack Paintings”, resemble in form the “dry stane dykes” (stone walls) found all over Scotland, but are injected with the sort of colour usually found on the barrier reef, or in a particularly wild cocktail. Overhead, suspended from a rotating motor sourced from a mirror ball, inner tyre tubes hang like a wayward, bad moon rising.

Jim Lambie travels the globe with a psychedelic palette of vinyl tape, multi-coloured potato sacks, and bicycle wheels. If you are curious about these materials, look no further than the artist’s childhood, when his father ran Scotland’s only mobile disco, and the go-go dancers practiced in his small living room (and it’s interesting to note in relation to these works that the term go-go comes from the French la gogue, meaning joy or happiness). These are artworks to dance to, to dance on, and to smile along with. They are sophisticated, intellectually cool, and so seductive you just want to eat them up. Jonathan Jones, the art critic of The Guardian has compared him to a synthesis of Joseph Beuys and Jackson Pollock. But for many, the sheer pleasure of colour that you will experience in Zero Concerto, the latest in a long line of international exhibitions, is as exhilarating as diving though a Hockney swimming pool and emerging into a Matisse landscape – after drinking one of those cocktails.

Dr. Peter Hill is an artist, writer and independent curator. 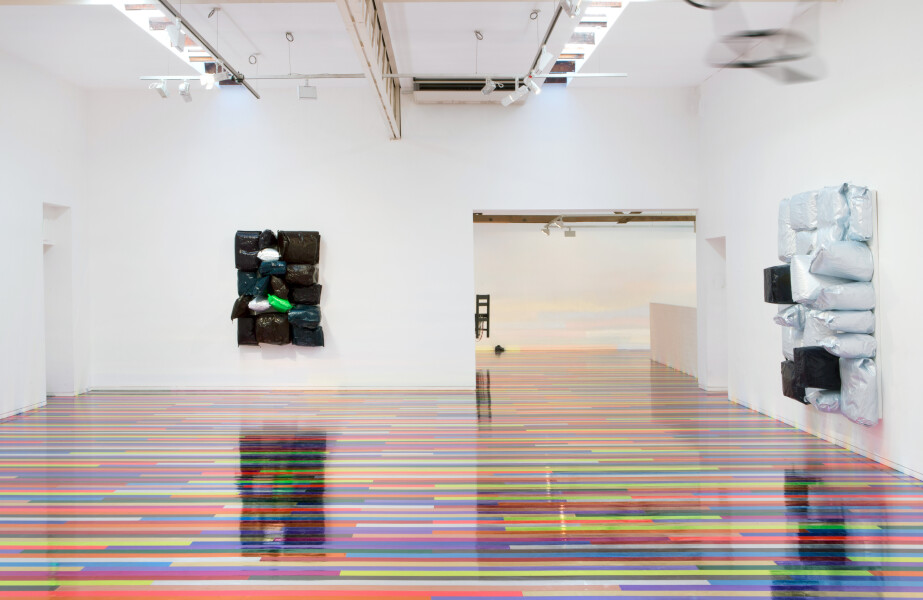 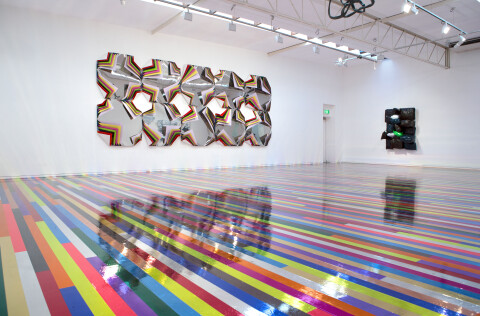 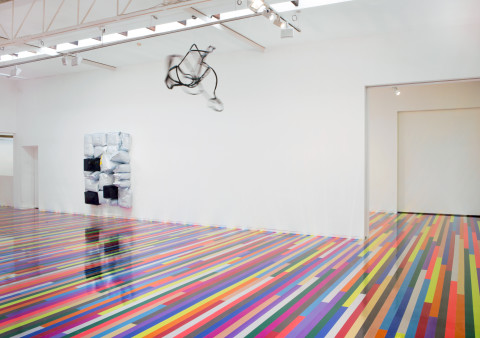 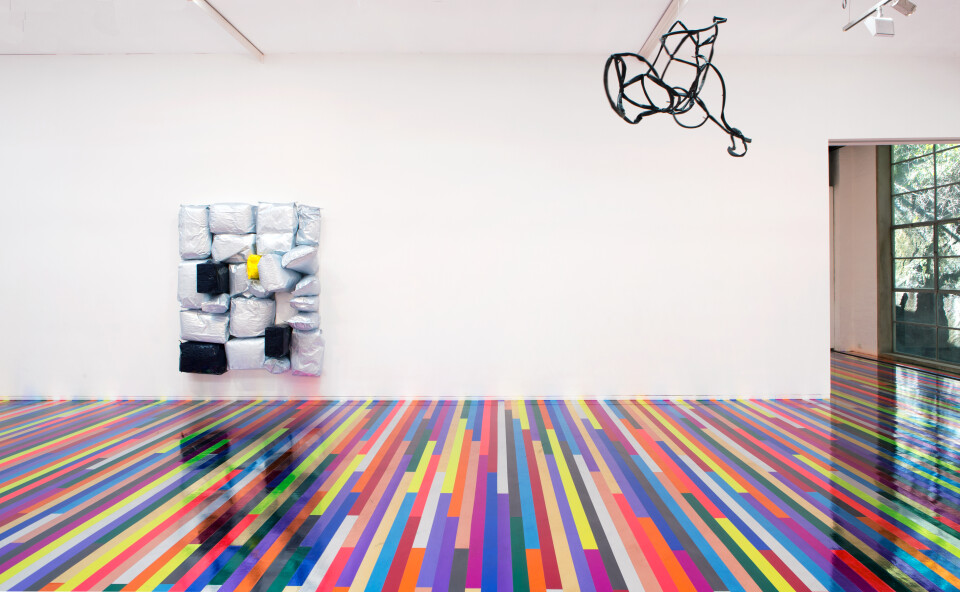 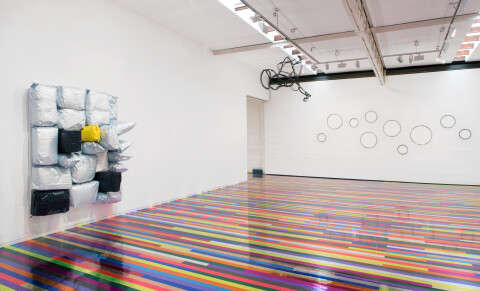 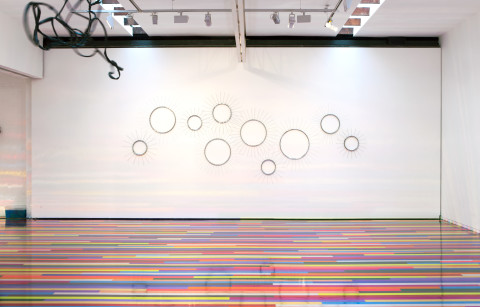 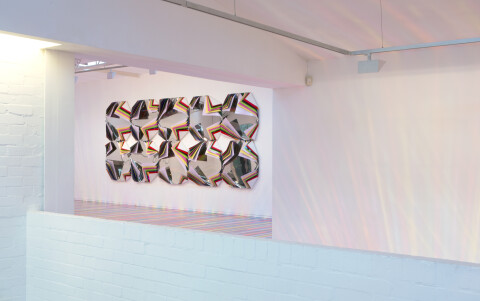 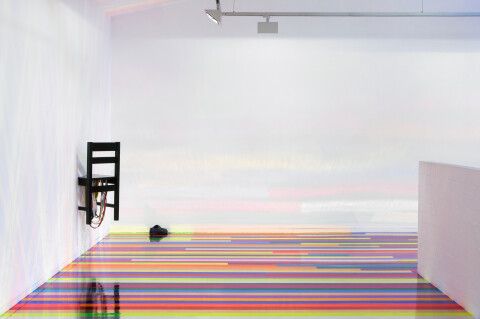 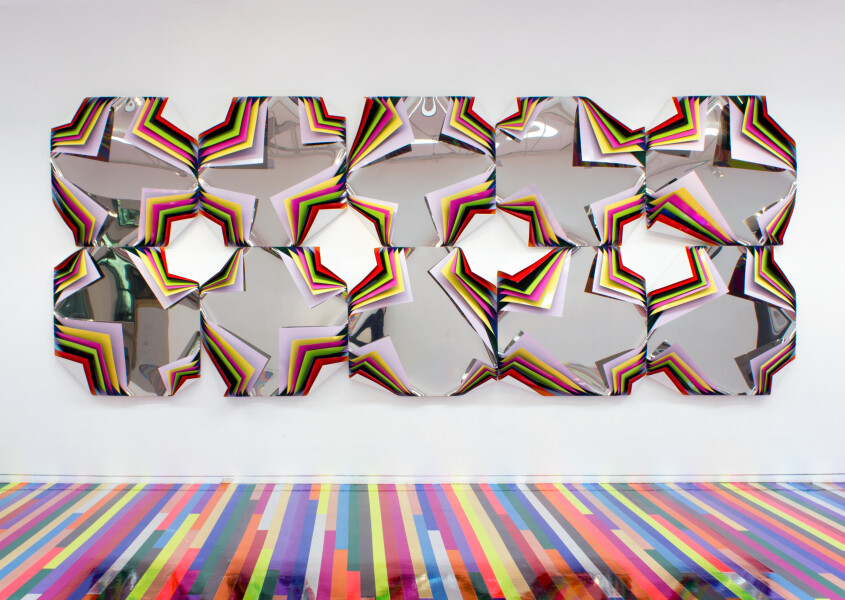 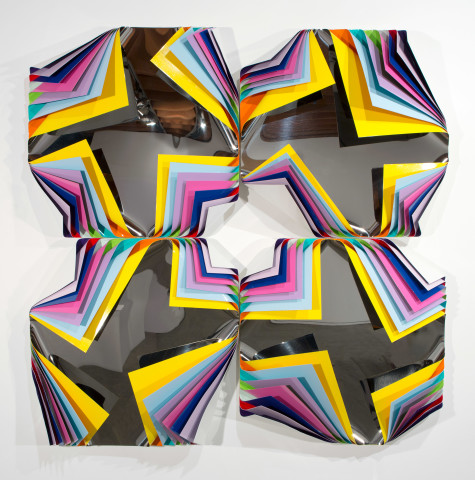 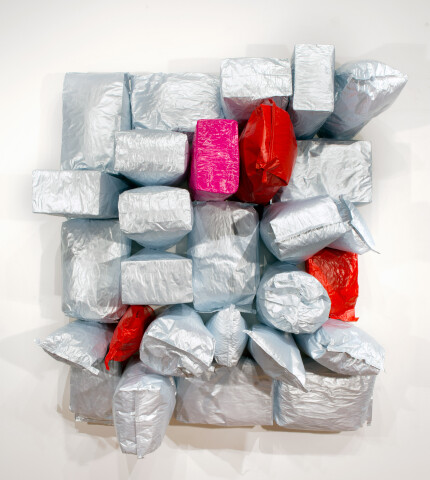 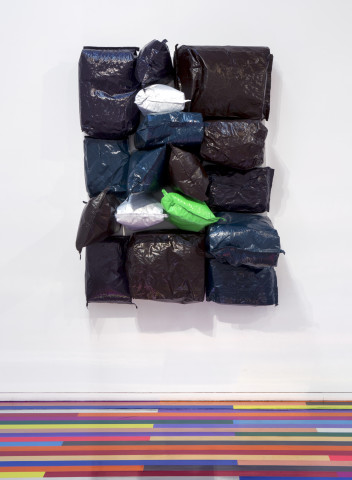 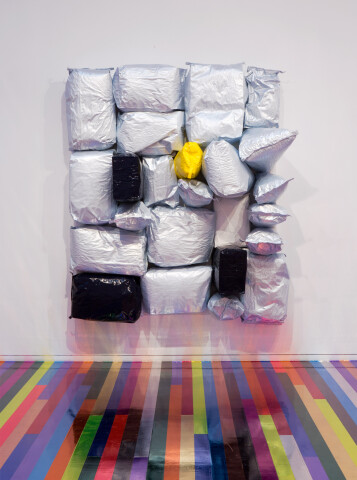 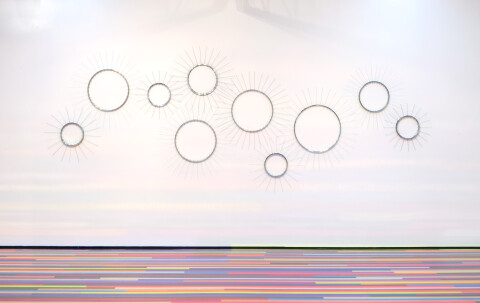 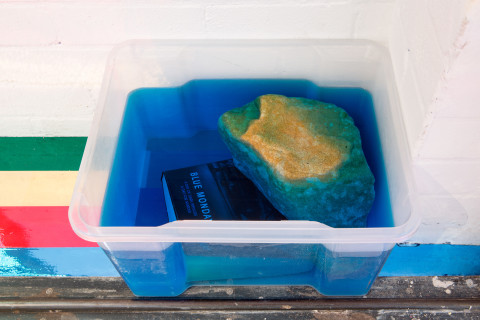 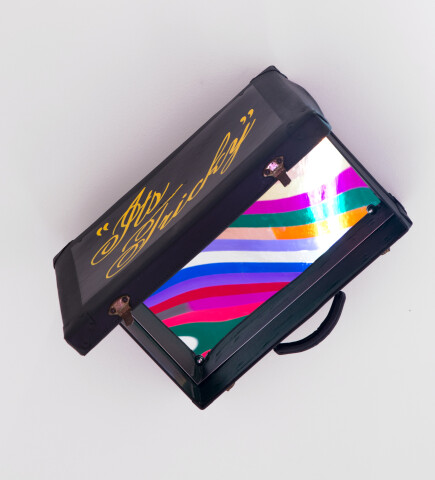 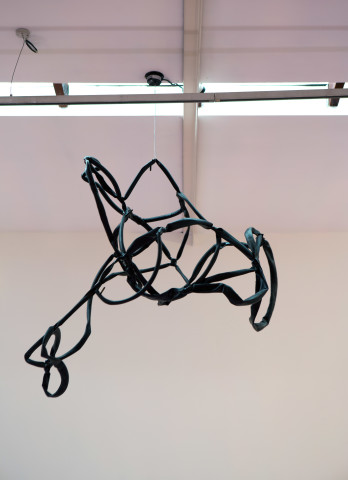 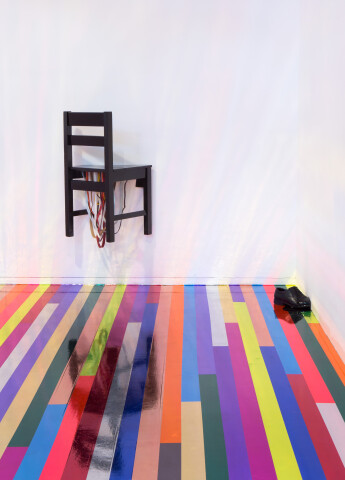 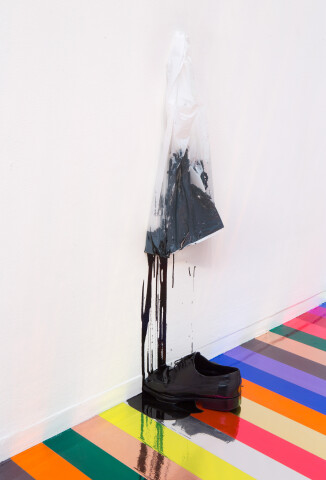 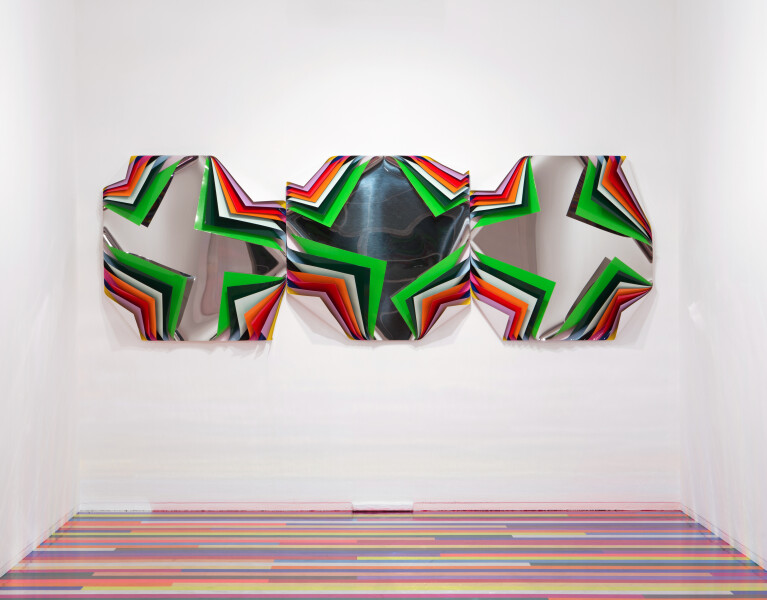 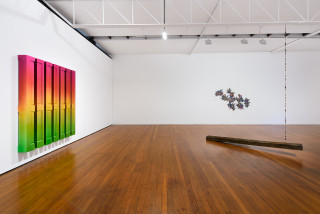 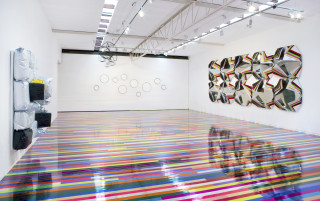 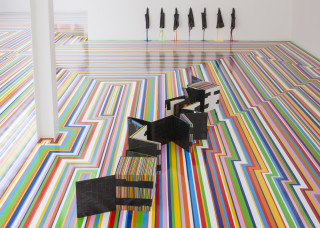 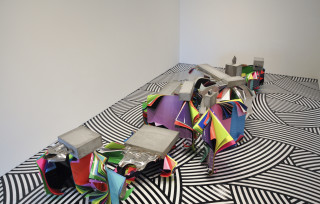 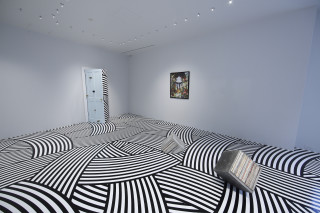 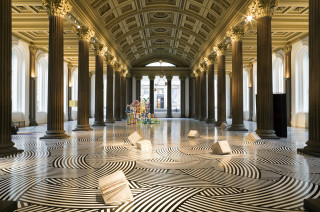