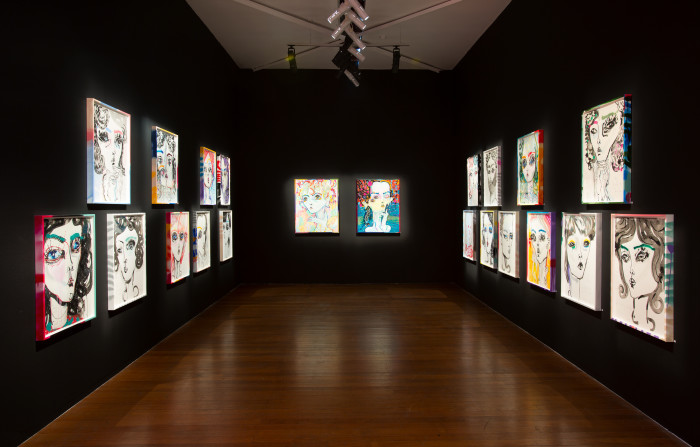 In soft river yr girl, Del Kathryn Barton has created twenty-two dazzling portraits that provide intimate windows into the artist’s personal world. In her new series of works on paper, the faces of young women, friends and the artist’s multiple selves stare out at us, daubed with pops of vivid colour from within glitzy frames.

With broader brushstrokes and wet visceral lines, Barton has moved away from the detailed galaxies of tessellated expanses, letting go of strict formalities to employ thicker, expressive lines that draw attention to the wide-eyed gaze of her fantasy figures. As we look at them and they look at us, the gaze compels the viewer to consider their own position within the work, allowing us into the artist’s world with freer expression.

For Barton, the eye has always been a significant symbol and we are often dazzled with multiple seeing eyes: an eye into the artist’s fantastical world, an inner eye, a spiritual, watchful eye always looking and ultimately signalling a subversion of the expected viewer /subject relationship as well as providing an entry point into an alternate realm. Here these flat, pressed-to-glass women  - whimsical creatures  - staring glassy eyed at the viewer – also allude to a younger self, a naivety, a time gone by, the transition to womanhood and ultimately feminine mystery and power.

As line and brushstroke take precedence over narrative, the artist finds release from her own traditions and we discover the addition of new materials – spray paint scattered across the picture surface and over the frames, together with the use of blank, empty space. Stripped back, liberated and unrestrained, soft river yr girl provides insight into the artist’s own life, figures from real-life fairy tales as well as the artist’s own personal and creative anguish. Touching on themes of loss and grief, the work is potently self-referential and personal, yet like all of Barton’s work it bubbles with boundless energy and magic.

Del Kathryn Barton will present a major solo exhibition titled The Highway is a Disco at the National Gallery of Victoria, Melbourne in November of this year (2017). Earlier this year, Barton debuted her latest film RED at the Art Gallery of South Australia as part of the Adelaide Festival, later exhibited as part of the Sydney Film Festival and Melbourne International Film Festival (2017). In 2013, Barton was awarded the Art Gallery of New South Wales’ Archibald Prize for the second time with a portrait of actor Hugo Weaving. In 2012, a solo exhibition of Barton’s work was presented at the Heide Museum of Modern Art, Melbourne. She has also been included in notable group exhibitions, such as Dark Heart, 2014 Adelaide Biennial of Australian Art, Art Gallery of South Australia, Adelaide (2014), Express Yourself, National Gallery of Victoria, Melbourne (2014), Australia: Contemporary Voices, The Fine Art Society, London. (2013), Louise Bourgeois and Australian Artists, Heide Museum of Modern Art, Melbourne (2012), Theatre of the World, Museum of Old and New Art, Hobart (2012), Lightness and Gravity, Gallery of Modern Art, Brisbane (2012), Wilderness, Balnaves Contemporary Painting, Art Gallery of New South Wales, Sydney (2010), Feminism Never Happened, Institute of Modern Art (IMA), Brisbane (2010) and Contemporary Australia: Optimism, Queensland Art Gallery Triennale, Queensland (2009). In 2015, Barton was awarded the AFTRS Creative Fellowship, following on from her directorial debut with The Nightingale and the Rose (2015). This film was presented in Barton’s major solo exhibition Del Kathryn Barton: The Nightingale and the Rose with the Australian Centre for the Moving Image, Melbourne (2016). Barton was awarded Screen Australia’s Gender Matters funding in 2016 and selected as a finalist in the Bowness Prize, 2017.