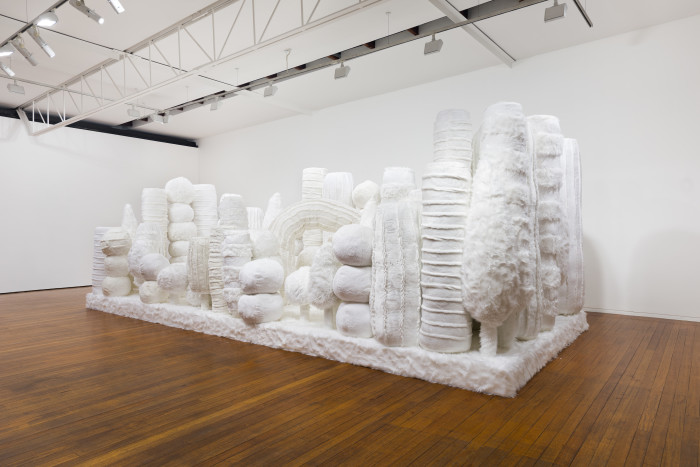 Caring, consoling, comforting, cuddly and cute are some of the associations with Kathy Temin’s epic soft sculpture, Mothering Garden (2021). Renowned for her monumental sculptures such as My Monument: White Forest (2007) at QAG|GOMA and My Monument: Black Garden (2010-11) at the Art Gallery of NSW, Temin continues her engagement with remembrance and legacy. Now, she has painstakingly sewn, stuffed and amassed over thirty-seven components rendered in white synthetic fur that resemble a gigantic, non-functional playground. Here are arched rainbows, bulbous trees, pointed topiary, striated towers, stacked orbs and a squat stadium propped on a low, white base. Temin alludes to the joyful aspects of play in mothering and the role of games, toys and children’s furniture.

Temin conjugates childhood soft toys with minimalist, monochrome sculpture whilst taking her garden of mothering indoors into a psychological and intimate world of wonder. Yet there is also something potentially cloying in this plush garden that can’t be touched or caressed. Instead, we are invited to observe so many shapes conjoined in unison: a family of fluffy softness in multiple shapes and sizes. Nearby, Mothering Garden: White Tree (2021), is a lone errant sculpture on a square base poised alongside the group of whiteness.

Mothering Garden: Wall Display (2021) is a cluster of rainbows, clouds and a tree in a cartoon configuration that leans against a wall. Temin’s inflated shapes recall the dazzling scenography of Judy Garland as Dorothy skipping along the yellow brick road in The Wizard of Oz:

Somewhere over the rainbow
Skies are blue
And the dreams that you dare to dream
Really do come true
Someday I’ll wish upon a star and wake up where the clouds are far behind me…
—Over the Rainbow sung by Judy Garland in The Wizard of Oz, 1939.

But there is no technicolour in Temin’s fantastical arrangement of oversized, anthropomorphic forms. Rather, she hints at the impermanence and wonder of both rainbows and childhood combined with a sense of amazement and idealisation. Her sculptures suggest an array of confluences: comfort/discomfort, functional/dysfunctional, indoor/outdoor, monument/unmonumental, play/display softly taking us to a white kitsch, dreamy refuge.

Kathy Temin has exhibited extensively in Australia and internationally since 1990. In 2010, Temin was selected to create a major, large-scale work for the Contemporary Project Space at the Art Gallery of New South Wales in Sydney, titled My Monument: Black Gardens, which was subsequently acquired by the Gallery. In 2009, Temin held a 20-year retrospective at the Heide Museum of Modern Art in Melbourne. Temin’s commissioned work My Monument: White Forest (2008) was included in Contemporary Australia: Optimism at Queensland Art Gallery | Gallery of Modern Art, Brisbane, and was subsequently acquired by QAGOMA.

Temin’s work is held in all major Australian public collections. Temin is a Professor and Head of Fine Art at Monash University in the Faculty of Art, Design and Architecture in Melbourne.