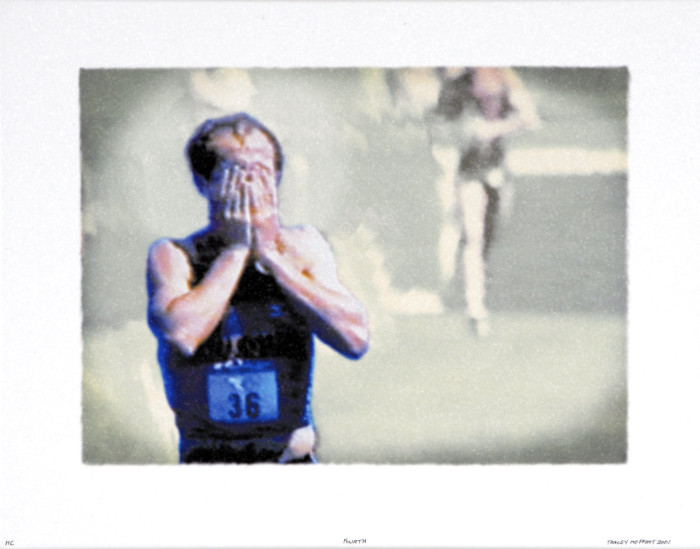 I imagined myself walking into the Sydney 2000 Olympic Games committee offices, plonking a stack of photographs on their desk saying, “This is what I saw!”  They would be looking at images of every athlete who came last. I figured that much of the press would be full of fabulous winners, splashed across the front pages of newspapers all around the world.  Wouldn’t it be more wonderful instead to see images of the brilliant athletes who didn’t make it?  Of course none of this happened. To begin with I can barely use a camera with a telephoto lens, let alone push for a spot in the ‘press pit’ along with thousands of sports photographers from around the world crowding together to photograph the drama of the Olympic Games.

So, at home, alone, in September 2000, there was just me and the television coverage of the Games. It was then that I narrowed my interest down to the position of Fourth.  What could be more tragic than coming Fourth in the final of an Olympic games race?  It’s sadder than coming last because when you come Fourth you have just missed out on a medal. You almost made it, but you just missed out. Fourth means that you are almost good. Not the worst (which has it’s own perverted glamour) but almost. Almost a star!  Most of the key moments captured in the twenty six images which make up Fourth are the acute moment when the athlete has just finished their final, turning or looking to see the outcome, and finding out the result… that they came Fourth! Most of the time the expression is expressionless, it’s a set look, which crosses the human face. It’s an awful, beautiful, knowing mask, which says ‘Oh s…t!’

Believe me, it wasn’t easy to find these moments since most of the press coverage couldn’t care less about anyone in Fourth position after a race. The camera always swings past them onto the winner. I had to concentrate and grab these moments.