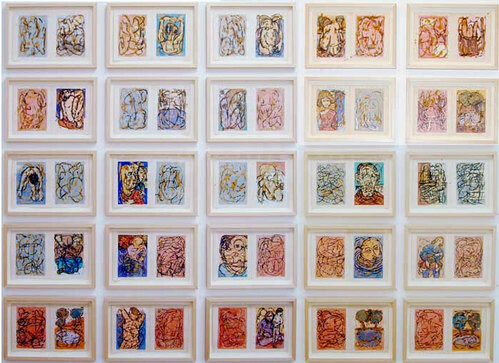 Orchard's works take their inspiration from writings; most are constructed from books or parts of books (typically battered editions bought at flea markets). They reveal a printmaker's fascination at the pervasiveness of writing and printing in Western society—a phenomenon that has affected human consciousness at the deepest levels.

Ken Orchard's exhibition Britannica at Roslyn Oxley9 Gallery comprises three series of works on paper produced by the artist since 1997. Orchard's works "take their inspiration from writings; most are constructed from books or parts of books (typically battered editions bought at flea markets). They reveal a printmaker's fascination at the pervasiveness of writing and printing in Western society—a phenomenon that has affected human consciousness at the deepest levels. Orchard's practice acknowledges and explores the distinctive material culture that results from the dominance of books and printing." [Martin Thomas, Image as Text/Text as Image--a Survey of Bookworks by Ken Orchard 1982 to Present, Country Arts SA, Adelaide, 2002]

Mungo Lunette 1997-99 is a panoramic, nine and a half metre long work depicting a silent dawn over the Mungo lunette, the central feature of Lake Mungo National Park in far western New South Wales. The work resulted from the unpicking of the artist's field sketch book (a book of hydrometric tables) following an artists' retreat at Lake Mungo. With Mungo Lunette, Orchard has tried to find a way to convey the compelling visual experience of encountering a terrain dominated by a vast horizon while, at the same time, evoking something of the unsettling mystery of a place that has acquired major archaeological significance.

Encyclopaedia of Days (Series I & II) 1997-98 is the first of an extensive series of works which use pages from Encyclopaedia Britannica as a drawing support. Actual pages and illustrational plates taken from books indicate a thematic concern with words and historical images associated with text which has been a feature of Orchard's work since the late 1970s. In Encyclopaedia of Days, ink, shellac and pastel are loosely applied. The random workings of the drawing process itself is held up for scrutiny. These works are largely the result of a free associational method of working, where the gestures mark both the passage of time and explore imaginative figurations of landscape, portraiture and the human form. As Ian Hamilton stated recently in his opening address to Orchard's touring exhibition Image as Text/Text as Image, "the works are about artistic process; a process that is part conscious—the use of materials—and part subconscious—letting the hand wander, not knowing what the outcome will be. Having selected the page and primed it with shellac, Orchard lets the brush/pencil take him on a journey that is not controlled until the end (tidying up after the journey)."

Twelve scenes from the life of Saint Benedict—Tuscany series (after il Sodoma) 1999, not previously exhibited, is one of two groups of works which resulted from a visit to Italy in 1998. Orchard chose the Italian sections from Encyclopaedia Britannica as a support upon which he copied a cycle of fifteenth century frescoes from the Benedictine monastery, Monte Oliveto Maggiore, in central Tuscany. Orchard rendered twelve narrative fragments painted by the sixteenth century Italian painter il Sodoma who executed the frescoes for the great cloister of the monastery. Their subjects comprise the most significant episodes of the life of St. Benedict. The work forms a kind of memorial exercise for the artist to recall the pleasure of viewing this remarkable fresco cycle.

Brittanica is the third solo exhibition of Ken Orchard's work at Roslyn Oxley9 Gallery. He was included in the 1989 Australian Perspecta, the 1990 Adelaide Biennial of Australian Art as well as a number of significant survey exhibitions of Australian printmaking at the National Gallery of Australia and the National Gallery of Victoria. Ken Orchard's work is held by most major public collections in Australia. Selections from Encyclopaedia of Days were first exhibited at the University of South Australia Art Museum in 2001 and a further selection of them is currently touring regional galleries in South Australia. 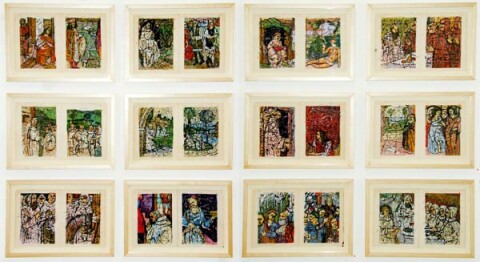 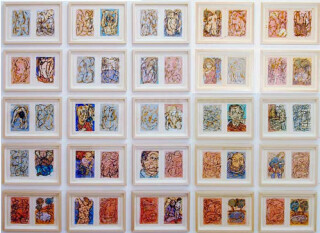