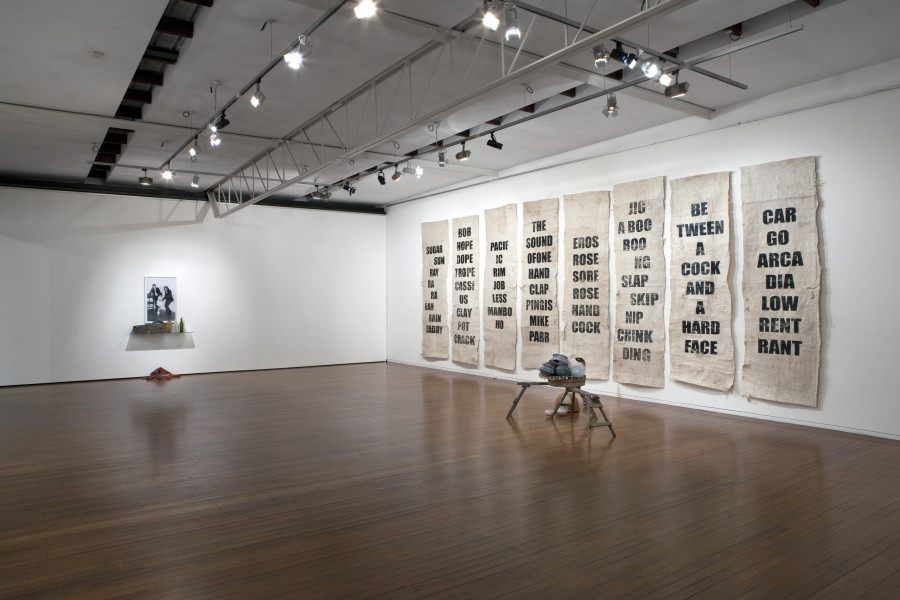 What all this has to say to do with the current ensemble of prints and objects, I honestly can’t say. All I know is that stagnation scares me to death and as an antidote to it I try to keep moving. But also, that as long as love and “the funk” exist in one’s life that’s all that counts.

For the past few weeks I’ve been stuck on titling this show. In the end, I sort of got it wrong. I actually arrived at the ‘right’ title in bed this morning, incidentally the day of the opening. The new one, the one now in my head, would’ve been far more apt and extended the title of my first solo show at Oxley9 in 2007. The title for that show was Views from the Couch. It came as a sort of ode to the numerous ‘couch-surfing’ escapades I’d endured over the three-year period, 2004-07. Much of the work, back then, was conceived during brief Sydney stopovers between Port Vila, Cape Town and Paris. Indeed, many of the ideas and subsequent work that followed, stemmed from the oddity of awaking in other people’s living rooms. As a follow on to that, this show might then have been titled Views from Hammock, given the wonderfully ‘transient’ accommodations and numerous hammocks I’ve been fortunate to kip in over recent years, spanning the South Pacific, India, Japan, and most recently Seoul, my beloved’s ‘native’ city. Indeed, it seems fitting as the hammock, traditional futon, bed-bugged Indian mattress or pandanus sleeping-mat, have been the basis from where much of this ensemble of words and objects were conceived. In that regard, I suppose it’s fair to say a good portion of “the work” was done in the horizontal position.

The Motel Blue Pango entered my orbit whilst looking for a cheap aside from an arduous stay on Nguna, an extinct volcanic island off the north Efate coast. By the time I’d arrived at the Blue Pango I’d been residing with NiVanuatu friends in the warmly village of Unakapu. There I’d been some five weeks, tying up loose ends for a show in Istanbul and spending time with Jack Siviu Martau and his ailing mum. While island hopping and rustic village life may sound idyllic, let me assure you it can be harshly testing at the best of times. Once the romance of frangipani, palm-strung hammocks and warm turquoise seas wear off, things can be pretty tough. Personal privacy is also a factor largely unknown in traditional villages. By contrast, the Motel Blue Pango offered the cheap, modest home-comforts I was beginning to crave. Not just privacy, but a place where I could boil an egg, enjoy a decent shower and sit on a plastic toilet seat. What unfolded over the course of my two-week stint were a more than odd array of room-mates and conversations that would put to shame any Louis Theroux docco or Being Lara Bingle. The awkwardness around these brief relationships and truncated bed-bunk conversations began to culminate in a loose set of observational writings and thoughts, complied on the hammock out front of my room on Erakor Lagoon. It’s around these odd encounters the basis to this show begun to form, though working with Tongan Ngatu and Indian ceramics had long since commenced.

For a week I roomed with Chris, a Polish body builder and Chippendale stripper who’d come to Vila to extend his Australian visa. Chris, seeing online images of iridescent beaches and tanned G-stringed women, had come seeking the party scene, Euro-trash, loose chicks and the sun of Kuta. Unfortunately, he’d got it badly wrong. That week (incidentally the same week Roslyn & Tony popped over for some post Venice R&R) we copped torrential rains. On top of this, on his first night, I had to break the bad news that Vanuatu is a proudly God loving nation, where the lights, if there are any on, are usually out by 10pm. Also, bikinis by local standards are generally considered “naked” and thus mostly avoided by local women in favour of bathing in baggy T-shirts or an old Mother Hubbard. What did impress me, though, was that Chris had taught himself English from watching BBC TV in Athens where he’d resided for three years working in construction before heading to Sydney to chase his dream of becoming a travelling Chippendale. During his six months in OZ he’d seen more of the country than most Australians, doing gigs from Alice Springs to Port Macquarie, Margaret River and the Rooty Hill RSL. He claims, at the height of his professional bodybuilding career he came in at number five for Mr. Universe.

For a few nights I roomed with a newly divorced mop-haired young Englishman. Marcus was stiflingly ‘public school’, Hugh Grant in tone and stature. He claimed he’d recently ‘seen’ God, and as such, had parted old ways with the hooch, fags and booze days before we met. His vows didn’t last. Apparently, he never had to work again in his life. As a kid he’d inherited a large Kenyan farm on which they’d struck gas. The land, he said, was recently sold to the Coca Cola Company for some ridiculous amount of mega bucks. What didn’t add up was why he was staying somewhere as crummy as the Blue Pango, stealing my smokes and living off Maggie noodles and bananas, like me. On top of having NO sense of personal hygiene. Then, there were six days with guitar strumming missionaries from NZ who had no qualms reminding me of the sin of alcohol yet openly confessed to enjoy the smell of beer and cigarettes, and so would join around my hammock, chat and sing songs soaking up my own dusk ritual of a few Tusker Lagers and Peter Jacksons.

In hindsight, I suppose the Blue Pango was pretty ‘blokey’. But, for four nights two Scandinavian blondes in their early twenties passed through. I won’t go into detail of what happened, there’s not the time or space. But the presence of attractive young women certainly changed the dynamic, especially for Chris’s final two nights and my lack of sleep because of the noise.

What all this has to say to do with the current ensemble of prints and objects, I honestly can’t say. All I know is that stagnation scares me to death and as an antidote to it I try to keep moving. But also, that as long as love and “the funk” exist in one’s life that’s all that counts.

In 2011 Newell Harry was selected for the 12th Istanbul Biennial, curated by Jens Hoffmann and Adriano Pedrosa as well as Rendez-Vous 11 at the Institut d’Art Contemporain, Villeurbanne / Rhône Alpes, France in conjunction with the Lyon Biennale, which toured in 2012 to the National Gallery of South Africa, Capetown. Other major group exhibitions include the 17th Biennale of Sydney, Beauty of Distance, songs of survival in a precarious age, directed by David Elliot, 2010; Adelaide Biennial: Before and After Science, curated by Charlotte Day and Sarah Tutton, Art Gallery of South Australia, Adelaide; Asia-Pacific Triennial of Contemporary Art, Queensland Art Gallery, Gallery of Modern Art, 2010 and Freehand: Recent Australian Drawing, Heide Museum of Modern Art, Melbourne, Australia, 2010. Newell Harry’s installation for Rendez-Vous 11 was acquired in full by Les Abbatoirs, Museé d’Art Moderne et Contemporain, Toulouse, France. His work is also held by the Museum of Contemporary Art, Sydney, Newcastle Art Gallery, Queensland Art Gallery, Wollongong University, Artbank and the Ergas Collection as well as a number of private collections. He is included in the Art and Australia publication Current: Contemporary Art from Australia and New Zealand published in 2008. Blue Pango: Musings & Other Anecdotes is Newell Harry’s third solo exhibition with Roslyn Oxley9 Gallery. 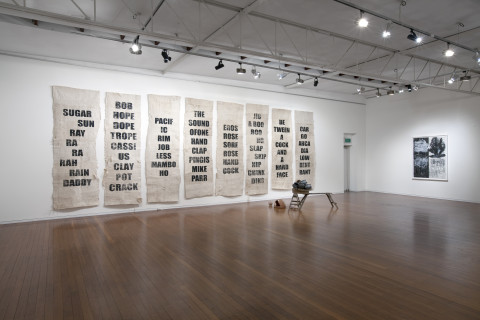 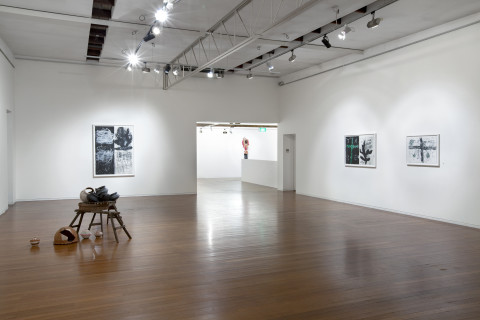 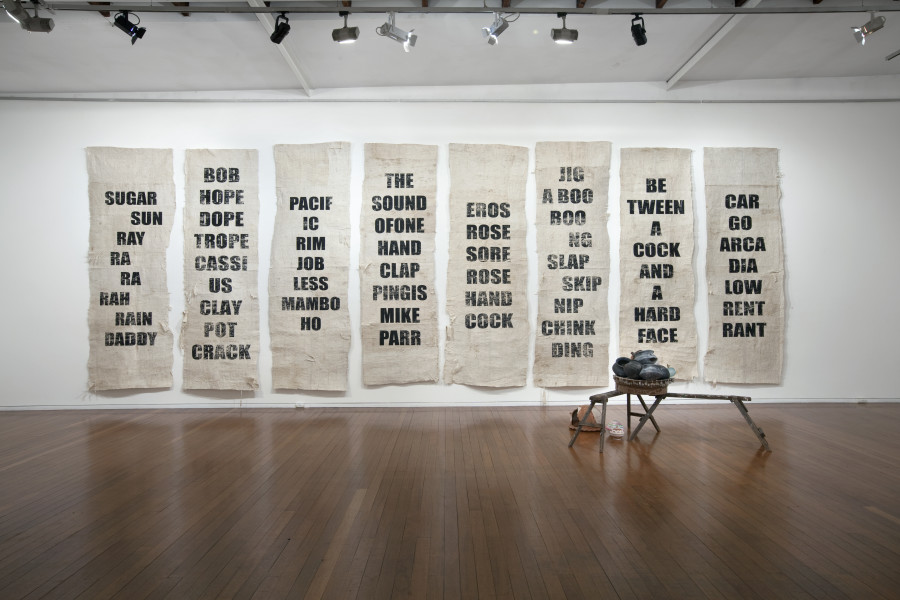 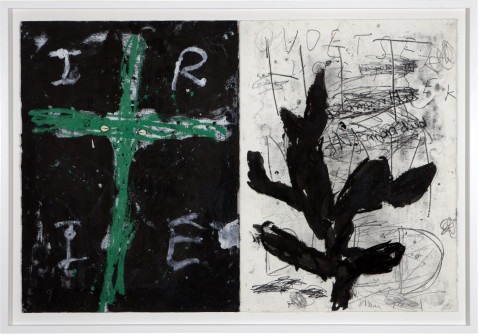 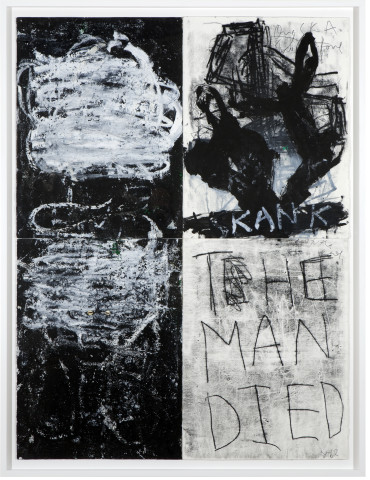 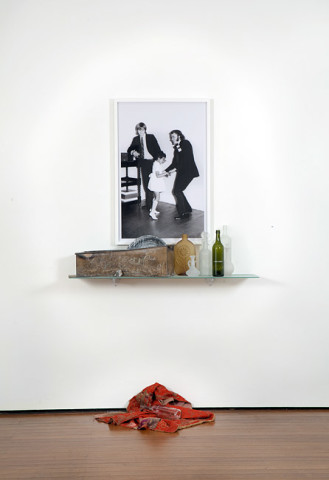 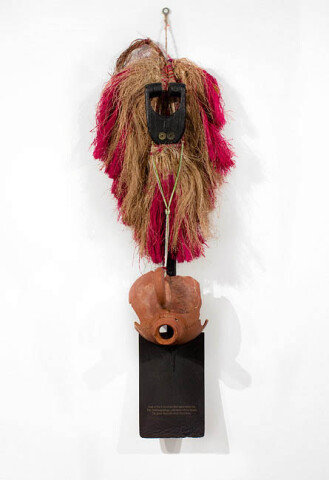 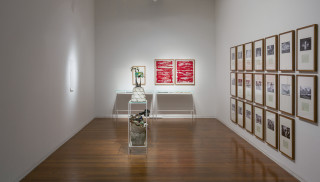 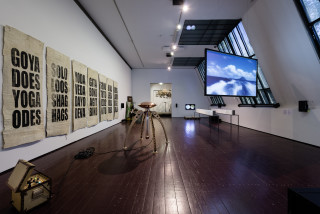 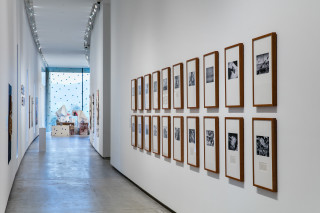 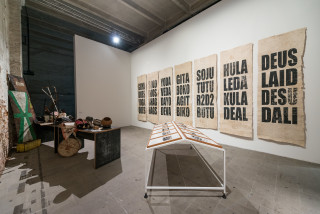 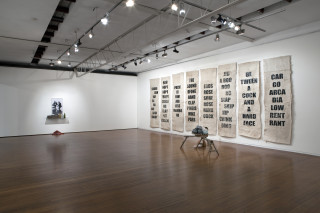 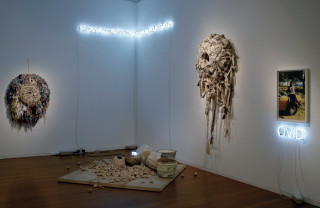 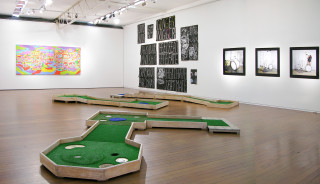