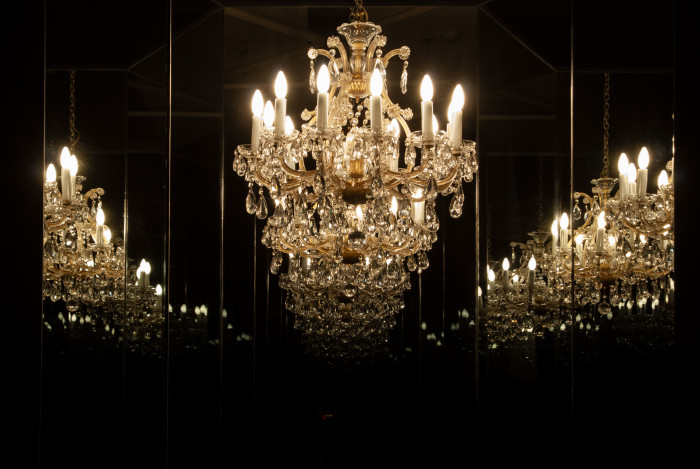 Roslyn Oxley9 Gallery is excited to present its fourth solo exhibition by internationally renowned Japanese artist, Yayoi Kusama. The exhibition consists of a major sculptural installation, Chandelier with Pain, and a group of three abstract paintings. Collectively, the works explore themes of infinity, narcissism and self-obliteration—concepts that have dominated Kusama’s artistic practice since the 1950s.

Chandelier with Pain is a hexagonal glass prism encasing a glittering chandelier. The interior walls are mirrored, multiplying the chandelier's lighted branches to infinity. Like a hypnotic jewel, the mesmerizing object slowly rotates in the centre of the glass space, continually and subtly altering the countless reflections. The numerous elements of the richly ornamented chandelier proliferate into the distance, forming boundless fields of crystals and light. Kusama’s use of repetition overwhelms the senses, obliterating the viewer’s sense of self. Her exquisite chamber of echoed light and refracted radiance is also a window into an interior space of existential anguish and obsessive thought.

Kusama’s obsession with the accumulation of pattern stems from childhood hallucinations of dots and nets. A method of 'self-obliteration', Kusama has applied these motifs to numerous surfaces over the years, from canvases and walls to organic forms and naked performers. The Infinity Net paintings in this exhibition continue the artist’s compulsive exploration of infinite complexity. They are highly structured, disciplined works, yet the result is curiously kinetic. To the eye, Kusama’s static lines appear to coalesce and migrate, causing the canvases to shimmer and vibrate.

Yayoi Kusama is one of the most important artists of her generation. She has twice represented Japan at the Venice Biennale (1966, 1993) – testament to the enduring relevance of her work. Kusama was born in Japan in 1929 and moved to New York in 1958 where she was a pioneering member of the post-war avant-garde. In New York, Kusama had close associations with Joseph Cornell and Donald Judd as well as Barnett Newman, Mark Rothko and Carolee Schneemann. Incorporating performance into her practice, she was active in the New York art scene until 1973 when she moved back to Japan. Kusama is the matriarch of contemporary art in Japan today and her influence can be discerned in the work of such high profile American artists as Louise Bourgeois. Kusama has been the subject of many major international museum exhibitions including Yayoi Kusama, National Museum of Modern Art, Tokyo (touring Japan), 2004-2005; Kusamatrix, Mori Museum of Art, Tokyo, 2004; Yayoi Kusama, Le Consortium, Contemporary Art Center, Dijon (touring France, Denmark, Korea), 2001-2002; and Love Forever: Yayoi Kusama 1958-1969, Museum of Modern Art, New York, Los Angeles County Museum of Art, Walker Art Center and Museum of Contemporary Art, Tokyo, 1998-99. Her work is held in numerous major international museums collections including the National Gallery, Washington, the Museum of Modern Art, New York, the Centre Georges Pompidou, Paris, the Neuenational Galerie, Berlin, the Stedelijk Museum, Amsterdam, Queensland Art Gallery, Brisbane and most major museums in Japan. Australian audiences have seen Kusama’s work in the 2000 Biennale of Sydney, the 2002 Asia Pacific Triennial, and most recently at the Museum of Contemporary Art in Sydney, where the major retrospective, Yayoi Kusama: Mirrored Years is currently on display. The exhibition is touring to City Gallery, Wellington (26 September 2009 - 7 February 2010).