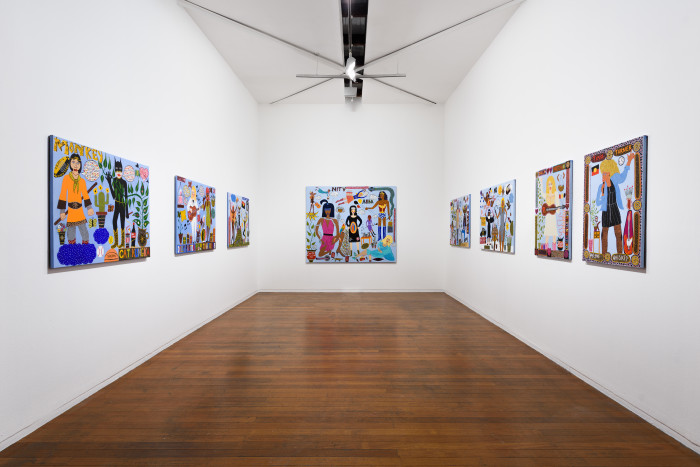 One of a Kind - Knowing Me Knowing You Ah Ha

Wonder Woman was created by her spirit mother out of clay and brought to life with super powers, raised as an Amazon by her mother and aunts. Wonder Woman was adept and empowered in using amazing technological weapons and tools in fighting evil in society, either alone or collaborating with the community of other superheroes. She has become a hero figure for the Yankunytjatjara artist Kaylene Whiskey.

Kaylene Whiskey (b. 1976) was born at Indulkana community in the APY Lands (Anungu, Pitjantjatjara, Yankunytjatjara), an area of almost mythical traditional Aboriginal cultural practice. The epitome of long intense Aboriginal cultural history, and a life of hard fought survival in a most harsh desert landscape; of what an Aboriginal should be. Pigeonholed by many as sub-human, stern, stoic personalities and society, the art of Kaylene is like a ray of sunshine against this stereotype. Knowing me, knowing you – as much as this society has been scrutinised and defined by westerners; these people have constantly looked back, observing the gifts and practices of western culture and technology, rejecting some, and adopting, judging and enjoying other parts with great humour and wit. Her images have certainly won over many with their wittiness; they just make me smile.

Recent international articles on contemporary art have argued that much art today seems fixed to talking to the art world tent, ideologically driven and lacking life, empathy and feeling. Kaylene’s colours, arrangements of fabulous figures (Cher, Dolly Parton and Tina Turner) in action and play in their everyday rituals and fun, have character, intelligence, positivity, and sheer joy in a sea of anxiety.

Kaylene Whiskey (b. 1976, Indulkana, South Australia) lives on the Anangu Pitjantjatjara Yankunytjatjara (APY) lands in the remote north-west of South Australia and works at Iwantja Arts, Indulkana. Whiskey’s paintings celebrate heroic power, pop culture and cultural knowledge as the blended reality that is contemporary life in a remote Indigenous community of Central Australia. Her practice links the traditional culture of her community’s Elders with the experience of the younger generation, who have grown up with contemporary western influences like Coca Cola and Dolly Parton. Painted to a soundtrack of classic rock, pop and country music, Whiskey’s works are rich in irreverent humour.

Most recently Whiskey has won the General Painting Award in the 2019 Telstra National Aboriginal & Torres Strait Islander Art Awards (NATSIAA), Museum and Art Gallery of the Northern Territory (MAGNT); and her work was included in a major survey exhibition The National 2019: New Australian Art, Museum of Contemporary Art Australia, Sydney (2019). Whiskey was the winner of the 2018 Sir John Sulman Prize, Art Gallery of New South Wales, Sydney (2018); and her work was included in A Lightness of Spirit is the Measure of Happiness, Australian Centre for Contemporary Art, Melbourne (2018).

This is Kaylene Whiskey’s first exhibition with Roslyn Oxley9 Gallery.