Wild Is The Wind 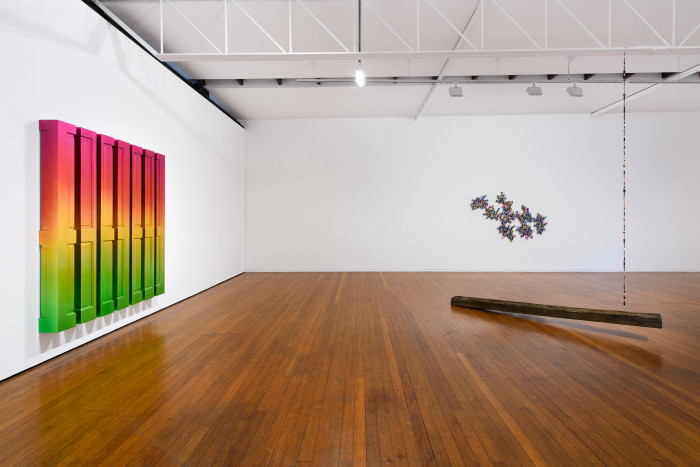 In the middle of Roslyn Oxley9 Gallery sits an old wooden railway sleeper – once used to bolt the train tracks to – suspended by a string of beads from the ceiling.

The artwork by Scottish artist Jim Lambie, surrounded by his other pieces, with their pops of colour and whimsical musical titles, suggests a fantasy landscape, one enthused with marvel and wonder. “It provides the show with an anchor for thoughts and dreams,” says Lambie.

Wild is the Wind, Lambie’s second solo show at the Gallery, takes everyday objects that are often overlooked and gives them new life. Clothing, jars and vinyl records are all brought into sharp focus.

Born in Glasgow in 1964, Lambie’s father ran a mobile disco while his mother practised go-go dancing. Decades later, the psychedelic colours, pulse of the disco and music itself still informs his work. “Zobop”, first conceived in 1999, saw the artist cover a floor in yards of rainbow-coloured vinyl tape designed to look, as he said, “almost like the grooves of a record”. The artwork, which changed in each subsequent iteration, helped make his name, appearing in New York’s MoMA, London’s Royal Academy of Arts and the Tate Liverpool in the UK.

Lambie’s love of flea markets and junk shops, too, where he believes the “real language of the city resides”, has become an inspiration. In Wild is the Wind, sunglass lenses, of all shapes and colours, are fused together in the same way as traditional stained glass windows, creating architectural wall sculptures in the shape of constellations. Peering at them, the viewer can see their own reflection – and ask: What does “cool” really mean?

Wooden doors, meanwhile, are sliced up and stuck back together to make columns. Spray-painted vivid orange, blues and greens, they represent the rising or setting sun: the opening and closing of various metaphorical doors. Their titles – such as “Sunrise (Meadow Lark)” or “Sun Up (Gold Finch)” -- reference songbirds who warble as the dawn breaks.

Lambie is obsessed with colour: from bold primary blue and red to richer, burnished bronze and brassy gold. In his new video installation “Self-Portrait (in seven parts)”, the artist raises a spray paint can in his studio and, slowly, soaks the screen. The action is repeated again and again with different shades. And in his performance work “14 Carrots” (the title is a play on 14-karat gold) the artist dips bog-standard supermarket carrots in different paints and hits a white wall, allowing the wet pigment to dribble down, staining the wall.

One of the UK’s most celebrated artists, Lambie was shortlisted for the 2005 Turner Prize and represented Scotland at the 50th Venice Biennale.

The work of Jim Lambie (b. 1964) is included in numerous public collections including The Museum of Modern Art, Dallas Museum of Art, Edinburgh National Gallery, TATE, Zabludowicz Collection, DESTE Foundation, Rubell Family Collection, Albright Knox Museum, Mora Foundation, Cincinnati Art Museum and the Hirshhorn Museum and Sculpture Garden. In 2000, Lambie was presented the Paul Hamlyn Foundation Award for Artists in London; and in 2005 his installation Mental Oyster was shortlisted for the Turner Prize. He represented Scotland at the 50th Venice Biennale in 2003.