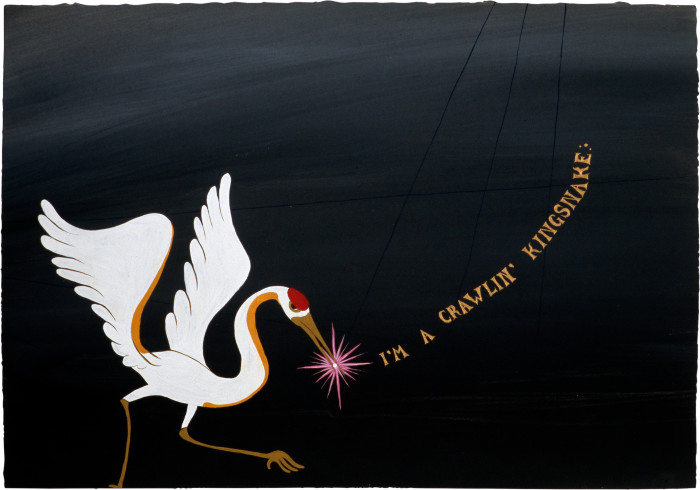 Nell’s Who Made Who is an exhibition of sculptures, installations and gouaches which explore identity, the imaginary and the contemplative discipline of Zen Buddhism through the ever-present fact of mortality. The cycles of birth and death are not only the literal beginning and endpoints of life. The lightning-flash clarity of any given moment marks the death of our old self. Each moment is independent of the past and future. Just as one’s identity and conception of self does not remain fixed, so there exists in this life the possibility for endless renewal.

The exhibition title is taken from an AC/DC song which ends with the question… "Who made YOU?" The repetition of the phrase ‘who made who’ co-opts a logic similar to the problem about the ‘Chicken and the Egg’ —what came first is ultimately unanswerable. The circularity of this problem undermines the validity of there being a supposed ‘original’ source. Along with references to rock n’ roll lyrics, Nell engages various spiritual and pictorial traditions. With sources ranging from Fra Angelico’s frescoes, to Australian Aboriginal art, Indian miniature painting, Zen Buddhism and western mythology, Nell incorporates into her idiosyncratic lexicon of signs—the now familiar drips, eggs and flies—a new vocabulary including gold, a strange grey ‘goo,’ reptiles and rodents.

A recurring theme throughout Nell’s works is the tension between attraction and repulsion. The sculpture Not Without My Tail includes a taxidermied crocodile’s tail - gutted, painted enamel-white and laid on a plush black velvet support. From the cavity of the once powerful, muscular tail leaks a viscous hand-gilded spill. The high-gloss white egg, Each Song Particular, bleeds gold leaf from a gash, gaping slightly, in its surface. In Open-ended, the epidermis of a slick black egg whirlpools into itself. At its innermost point we encounter a perfectly spherical pearl. The wound in Nell’s work is the site of the puncture, or ‘gap’ in consciousness that allows insight into personal trauma. The wound is where the inner and outer world coincide. The vulnerable and precious matter of the inner self is discernable in Nell’s sculpture because of the violence that the exterior sustains. The seductive, brittle surfaces or the obsessively constructed armatures are designed both to attract and protect. Nell has written that, "accessibility to transformation and beauty inevitably arise out of suffering and pain… they are, indeed the very same place."

The reptilian, scaled surface of Many Little Decisions is made up off 17,000 brass-plated upholstery pins that have been pressed into an egg-form, measuring 160cm vertically. Nell has written that, "The placement of each pin marks a tiny decision that has been made. Each seemingly insignificant action when repeated thousands of times becomes substantial and in this case, manifests itself as an object… Without exception each individual pin/mosaic-tile/element has its own personality, perfect in and of itself but is an inseparable part of the whole.” Referring to her own ‘scale,’ as in Fly as High as Me (2002) exhibited at the Art Gallery of New South Wales, Self-portrait also spans the artist’s height. The artist’s name is written in a cursive script across the gallery wall. This work plays on the arbitrariness of one’s name in relation to real self. Reflected throughout the exhibition is the desire to reconcile independence and interdependence. The letters are  constructed by a seething mass of grey plastic mice. Each individual mouse is also representative of the species, simultaneously creating and consuming the artist’s name. Nell has also created her own gravestone in this exhibition. It is a personal momento mori, both coagulating from primordial materials and subsiding back into the earth.

Nell was born 1975 in Maitland and moved to Sydney in 1993 to study Visual Arts at the Sydney College of the Arts. She completed her honours in visual arts at the UCLA in the USA in 1996. Nell was a founding director of Sydney artist-run space, Rubyare. In 1999 she was included in the Primavera exhibition of young art at the Museum of Contemporary Art, Sydney curated by Rachel Kent. Newcastle Region Art Gallery held a solo exhibition of her work in 2002 and in the same year she exhibited the work Fly as High as Me (2002)at the Art Gallery of New South Wales Contemporary Project Space, and travelled Tibet and Nepal to further explore her practice of Zen Buddhism. In 2003 she was selected by Maitland Regional Art Gallery for the inaugural exhibition of the new Contemporary Gallery, attended a mosaic school in Ravenna and was awarded the Rome Studio by the Australia Council for the Arts. Who Made Who will be Nell¹s third solo exhibition with Roslyn Oxley9 Gallery.