Michael Parekowhai
When We Dream 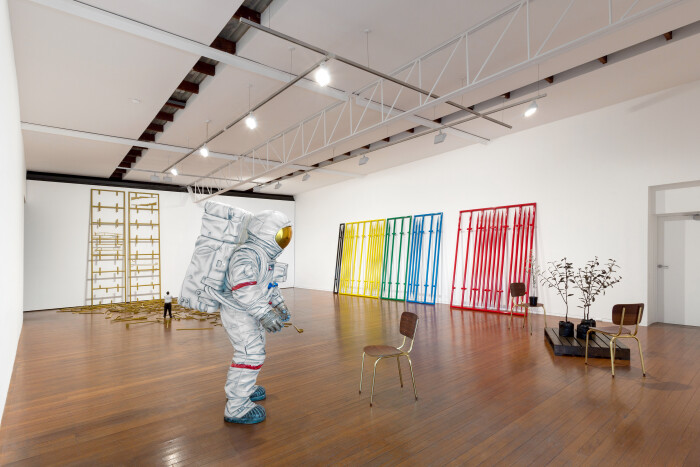 Michael Parekowhai is one of New Zealand’s most important contemporary artists. His sculpture has been described by Queensland Art Gallery | Gallery of Modern Art in Brisbane as “spectacular in appearance and complex in its allusions”, as he subtly navigates the salient cultural phenomena that surround contemporary indigenous identity. The artist renders quotidian objects extraordinary, blending cultural references from Maori and European traditions. His work often plays with scale and space; using humour to comment on the intersections between national narratives, colonial histories and popular culture. The coloured pick-up sticks of They Comfort Me III (2015) speak of a transformation of experience, a re-negotiation of perception and a complication of times past. The whimsical sculptural works in When We Dream evoke a double-edged nostalgia, recalling fragments of pop culture and complex childhoods. While his work is often described as emphasizing the extraordinariness of the ordinary, each body of work has layers of potential for meaning and significance - they are open to any depth of interpretation and storytelling.

Michael Parekowhai (b. 1968, New Zealand) is of Maori (Nga Ariki / Ngati Whakarongo) and Pakeha descent. He currently lives and works in Auckland, New Zealand. Parekowhai is Professor in Fine Arts, Faculty of Creative Arts and Industries, University of Auckland. His work is held in many significant public and private collections throughout New Zealand and Australia, as well as major works in permanent collections across the Asia-Pacific region and Europe. This includes The English Channel (2015) acquired by the Art Gallery of New South Wales and currently on view in the 19th Century Australian Art wing of the Gallery. Parekowhai represented New Zealand at the 54th Venice Biennale (2011), and his exhibition On First Looking into Chapman’s Homer attracted 40,000 visitors. The same year he was named Nga Toa Whakaihuwaka, Maori of the Year for Arts, and was awarded the prestigious Premier of Queensland Sculpture Commission. In 2017, Parekowhai was commissioned by the Auckland Council to produce a major life-sized sculpture, The Lighthouse on Queens Wharf – it is the largest monetary gift for a single artwork in New Zealand’s history. Notable exhibitions include Soft Core, currently on view at Wagga Wagga Art Gallery and scheduled to travel through regional galleries across New South Wales, Victoria and Queensland (2017 – 2019); Not Niwe, Not Nieuw, Not Neu, 4A Centre for Contemporary Asian Art, Sydney (2017); The English Channel, Art Gallery of New South Wales, Sydney (2017); Common Ground, National Gallery of Victoria, Melbourne (2016); The Promised Land, a retrospective at Queensland Art Gallery | Gallery of Modern Art, Brisbane (2015); Menagerie, Australian Centre for Contemporary Art, Melbourne (2014); ILLUMInations, 54th Venice Biennale (2011); Asia Pacific Triennial (2006-2007); Gwangju Biennale (2004); Auckland Triennial (2004) and Biennale of Sydney (2002). Michael Parekowhai has been represented by Roslyn Oxley9 Gallery since 2005.