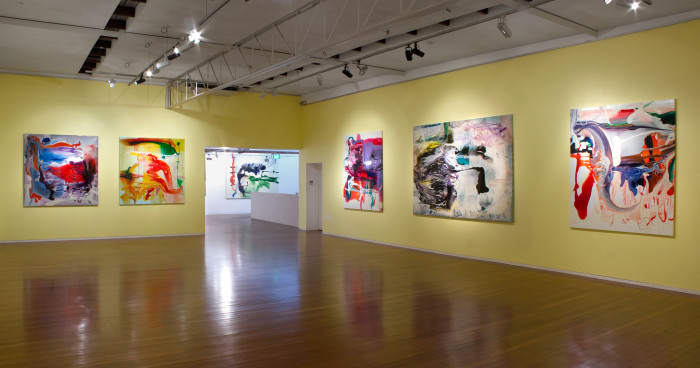 For over thirty years Dale Frank has experimented with materials; oil paint, hubcaps, enamel, graphite, fibreglass and disco balls are just some of the elements that have appeared in his work. For the last decade, varnish has monopolised his attention. The maturity of this obsession is palpable in WACKY DUCK FLUFFY TOM. It is evident in the delicate marbling, the broad bands of sweeping colour, the mounds of hardened varnish, and, perhaps most importantly, in the ease of transition between these elements.

Dale Frank is one of Australia’s foremost contemporary painters. His career spans over thirty years. In 1983, he was included in the exhibition ‘Panorama della post - critica: critica ed arte at the Museo Palazzo Lanfranchi in Pisa along with Thomas Lawson and Anselm Kiefer (curated by Helena Kontova)’. In 1984 he was included in the Aperto section of the Venice Biennale. Returning to Australia, in 1990 he was included in the 8th Biennale of Sydney (curated by Rene Block). A major solo retrospective of his work was held at the Museum of Contemporary Art, Sydney in 2000. Frank was included in the survey exhibition, ‘Contemporary Australia: Optimism’ at the Queensland Art Gallery / Gallery of Modern Art in 2008. Frank was selected for the 2010 Biennale of Sydney ‘The Beauty of Distance, Songs of Survival in a Precarious Age’, curated by David Elliott. Dale Frank has recently completed a major public art commission at 123 Albert Street, Brisbane. His paintings are held in every major public collection in Australia and in numerous private and corporate collections in Australia, Europe and the U.S. In 2005 Frank won The Arthur Guy Memorial Painting Prize at the Bendigo Art Gallery, Victoria. A major new monograph on Frank’s work ‘So Far: the Art of Dale Frank 2005-1980’ was published in 2007. Dale Frank has been exhibiting with Roslyn Oxley9 Gallery since 1982.