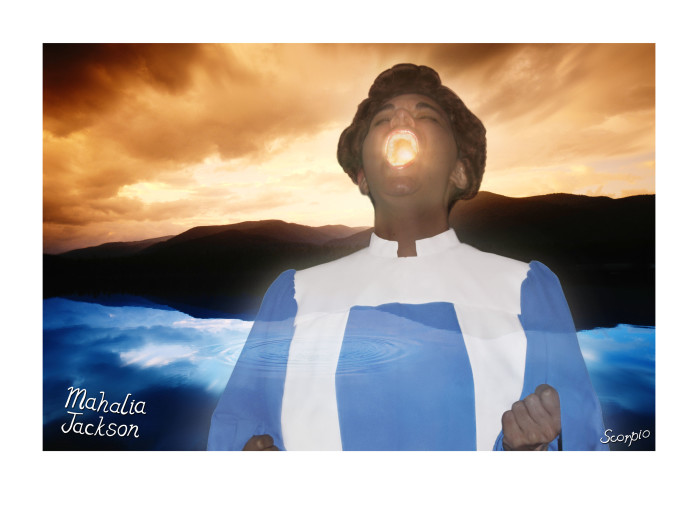 At a moment's glance - My photo series, Under the Sign of Scorpio, depicts me appearing as forty well-known extraordinary, women from history and popular culture, all born under the astrological sign of Scorpio. Since I was born on November 12th and am also a Scorpio, I have been intrigued about what makes the Scorpio tick. It is such a powerful and intense sign: Scorpios can ‘cross over’ into dark worlds and come back unscathed. They are fearless and listen to no-one. I know that I often stare at people with their mouths moving and I am amazed that they are actually talking and giving me advice; I always have to say “Sorry, I didn’t catch that”.

The shooting of this Scorpio series, as well as the printing, has taken me six months. Six months taking in the entire New York winter of 2005. Six months cooped up in my small New York loft with Miyuki, my faithful assistant. (Miyuki has put up with my excitement over the making of this new work, plus all my whining and insecurities, which would greet her every morning as she walked in the door.) The actual shooting of each of the famous Scorpio characters would take two minutes, but the thinking and planning would take a couple of weeks. For example, becoming Georgia O’Keeffe required me to take on her ‘attitude’. It isn’t easy to present ‘attitude’ with your back to the camera. I thought about her morning Kimono-like dress, and what she would be doing with her hands (she’s admiring them, of course).

Being Indira Gandhi was again researched and thought through. An Indian woman theatre director in New York’s East Village suggested I dress in white muslin, and ditch the idea of a coloured sari. I have also placed Indira on a mountain top. As a result my picture hopefully has a holy spiritual quality.

Lee Krasner was also a challenge. I riffled though my wardrobe (most of the costumes used are from my wardrobe) and found a 1960s sundress, totally perfect for Lee Krasner on holiday. I wanted Lee Krasner in the afternoon sun looking relaxed, as opposed to all the grumpy serious shots taken of her in the New York art world of the 1940s and ‘50s.

My Scorpio series pays tribute to a vast array of women. I’ve portrayed myself as Roseanne Barr, Goldie Hawn, Whoopi Goldberg (all comic geniuses); Hillary Rodham Clinton (to become the first American woman President); Shere Hite (sex report writer, I’ll never forget how she stormed off an Australian current affairs television show in the 1970s when the host was a sexist bastard to her). Marcia Langton and Oodgeroo Noonuccal (both Australian Aboriginal intellectuals and political activists and heroines to me); Tina Brown and Anna Wintour (brilliant English magazine editors); Fran Leibowitz (wit like no other); Edith Head (Hollywood’s most successful costumier); Marie Dressler (superb character actress: watch the film Dinner at Eight (1933) and wait for Marie’s final sizzling line to Jean Harlow); and Billie Jean King (the most alive tennis player ever).

In my portraits I have tried to capture their spirit and likeness, but only “at a moment’s glance”. It is almost like the moment when you see a famous person in a restaurant. Everyone is craning their necks to get a glimpse, only to end up with a fleeting view of the back of the celebrity as they exit into the VIP room.

I shot the photographs with a simple digital camera in my loft against a bed sheet curtain, and in my cramped awful bathroom. I then added the high-key supernatural coloured landscape backgrounds to the images in Photoshop on my computer. Rather than a formal portrait, I wanted a very pop, almost comic book quality. I propose that all of these women are ‘pop figures’, they are a part of the landscape of popular western culture.

I’ve been ‘Warholian’ in my artistic approach. Like the working class Andy Warhol, I’ve been a fan of great talent all my life, and I mean ‘fan’ in the nerdy sense of the word. I watch films and documentaries, read biographies, look people up on the Internet, buy memorabilia, and collect magazine articles. For example, I recently tore out a photograph of Lauren Hutton from New York Style magazine because it was so happy. Lauren once said in an interview “I willed myself to be beautiful”. (She said this after being asked why she became the top fashion model in the world when she hadn’t had a nose job or had the gap in her front teeth fixed).

This brings me to the subject of willpower, psychic ability, and – God forbid I mention it – witchcraft and magic. It is my theory that ‘talent’ is a supernatural force that cannot be explained. This also applies to astonishing athletic ability. Nadia Comaneci’s gold medal-winning perfect scores at the 1976 Montreal Olympics could be put down to the young Romanian gymnast’s intensive communist athletic training from age six. Yet despite her hard work and practice, there is always the other ‘thing’ that we can’t deny about Nadia: her ‘X factor’, the ‘unexplainable’.

It has been said that the actress Vivien Leigh, in her intensity, would practically “crawl across broken glass” to prepare for a role. When we watch her now in Gone with the Wind (1939) or A Street Car Named Desire (1951) we can almost believe it. I interpret this expression “to crawl across broken glass”, to mean that Vivien was able to ‘dig deep’, to go ‘across to the ‘dark side’ of her psyche like a brave Scorpio.

The other smouldering actress in A Street Car Named Desire is Kim Hunter as Stella. My favourite scene with Kim is at the end of the film, when she reassuringly and with beautiful tenderness talks the crazed Blanche DuBois (Vivien Leigh) outside and into the arms of the psychiatric nurses.

Margaret Mitchell, American southern belle and author of Gone With the Wind, was also brave. Margaret was writing about her own history, which she had researched thoroughly since she was a journalist. But her ability to put pen to paper and produce the novel’s larger-than-life characters must have been like a powerful unknown force working through her.

Marie Curie, along with her physicist husband, discovered polonium and radium in 1898. I’ve read how she slaved in the laboratory and grew physically sick from working with dangerous minerals. For two years, during summer heat waves and the dead of winter, she stirred a huge boiling cauldron of “pitchblende”. For a long time the Curie’s efforts failed, but Marie had a type of psychic vision and kept repeating “it’s got to be there, I know it is there”. Marie can be viewed as a sort of acceptable turn-of-the-century scientific witch. She helped to find something that had never been seen before because she somehow believed that it was ‘there’.

There is also the common expression when talking about a great singer’s voice that “the magic was there” – for example, Mahalia Jackson, who had the “voice of God”. (Aretha Franklin has said that she tried to emulate Mahalia). This is said because on occasion, the ‘magic’ sometimes isn’t ‘there’. This is because ‘talent’ and the ability to make ‘magic’ comes and goes. In a recent documentary, Joni Mitchell talks about staying up late at night to write songs. It is “only when the blarney is running” (she gestures to the air) that she finds that she isn’t “tripping over her tongue” and everything starts to flow and she can produce her exquisite lyrics.

I have depicted the brilliant psychoanalyst Frieda Fromm-Reichmann in a convulsive state in front of the “dark side of the moon”. Frieda, (who married and divorced Erich Fromm, who wrote the The Art of Loving), was able to cure schizophrenia. There is a famous novel about her called I Never Promised You a Rose Garden by Joanne Greenberg, based on an actual case in the 1950s where Frieda cures a teenage girl. Part of Frieda’s ‘treatment’ was to enter into the world of the schizophrenic mind, and bring the patients back to ‘reality’. Unfortunately Frieda was never able to ‘pinpoint’ how she achieved such positive results, since her treatments (mainly dialogue with the patients without the use of drugs) only worked over a period of years and consisted of ‘give and take’ and making mistakes. Sometimes patients would violently attack Frieda. The ‘Scorpio Frieda’ had the core strength to grapple with and confront unknown frightening energies.

In speaking of frightening energies – at this stage I have told very few of the Scorpio women that I have included them in this photo series (I have met about eight of them). The last thing one should do is flatter a Scorpio; they immediately get suspicious, and depending on their mood, will hate your guts for it. It has taken me years to learn to graciously accept a compliment. Growing up in the rough-and-tumble Australian suburbs, I was often mocked for my escapes into fantasy. (At sixteen I was still playing dress-up pantomimes with eight year olds.) Today, a wide-eyed art student will come up to me and gush “Are you Tracey Moffatt? I liked your last exhibition”. I usually choke a little and say “thank you”, and then crack a joke to deflect any further discussion of my work.

It is possible that my fears of offending any of the Scorpio women (or friends and relatives of the deceased Scorpios) in my series are unfounded. Recently, at the National Museum of the American Indian here in New York, I trailed after Wilma P. Mankiller (Chief of the Cherokee), and breathlessly told her that I had made an artwork about her. Wilma gave me the biggest smile and said: “Great, invite me to the show”.

Other Scorpios in my photo series not mentioned in my essay are: Elizabeth Cady Stanton, early American women’s rights activist whom I depict boxing. Anne Sexton, the confessional poet and self-confessed ‘witch’. Louise Brooks, the divine silent screen star; Björk, wonderful original pop star; Bonnie Raitt, the best white woman on slide guitar; Bibi Andersson, the Swedish actress. (See Bibi in the film Persona (1966) and die.) Shane Gould, the Australian swimmer who won three gold medals at the 1972 Munich Olympics at age fifteen, then gave it all up for a spiritual life and family. Geraldine Page: when you see her act in the film Sweet Bird of Youth (1962), you begin to think that she must have been the greatest actress in the world. Dorothy Dandridge, Black and Beautiful 1950s Hollywood movie star. Doris Lessing, terribly honest South African writer. Catherine Deneuve, the French actress, always mentioned with a sigh because everyone has been in love with her at some stage. Actress Ruby Dee: I portray her dancing in a fire and ice cave, since she projects these elements in the searing film A Raisin in the Sun (1961). Grace Slick, ‘60s psychedelic pop star from Jefferson Airplane. She once said she wanted to slip LSD into President Richard Nixon’s tea at the White House, “so he could see reality”. Actress Sally Field: watch the film Norma Rae (1979) and see Sally standing on the factory table holding a cardboard sign that reads “UNION”.