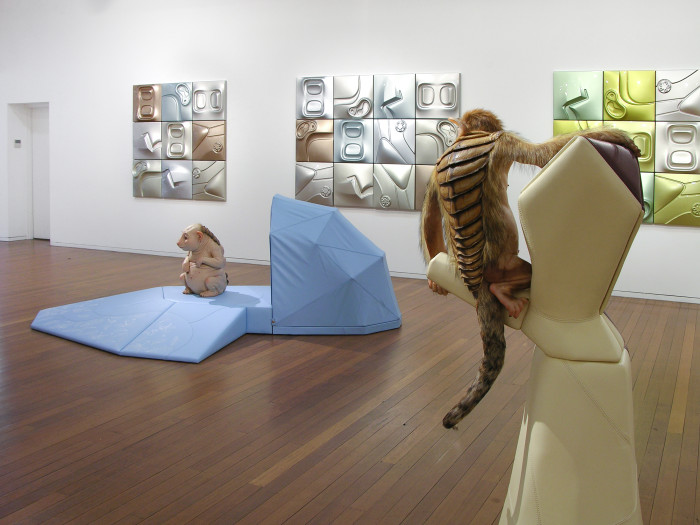 Some things, once done, are not easily undone. We might recognise later that we should not have done them in the first place, however undoing them is not so easy. Like an egg; once broken it cannot be unbroken. Once something is created, it is difficult to contain. This stands as much for a work of art as it does for a genetically modified creature. Anyone who thinks that they can maintain control of the things that they create is fooling themselves. Whether it is genetically modified canola, the cane toad or a work on the secondary market, once the thing leaves our hands all we can do is watch.

A number of strands of my practice come together in ‘Unbreaking Eggs’. Different media and iconographies that I have explored over the past several years appear together. However, all of these works spring form the same set of ideas and concerns. Creation, birth, responsibility, babies, the changing nature of the environment and our relationship with it, the increasingly nebulous boundaries between the technological and the natural world – each of these works explore these same ideas in different ways.

It would be a mistake to see this show as a series of individual projects separated by media. To me it is a single world, where each work expresses a different facet of the same core concerns. These works need to be together, because no one work can tell the whole story of anything.

I would be lying if I said I was not concerned with materials and making. My practice starts with ideas—notions, images, drawings—but it ends with things that express ideas. I am as interested in those things as I am in the ideas, and I want those things to be as good as they can be. Certain ideas are best expressed in certain ways. If I limited myself only to making a certain thing, what would I do when I had an idea that was not suited to it? So I work with others—amazingly talented artists and artisans—to turn my ideas and drawings and descriptions into the things that they need to be.

There are a few main stories that intertwine in this show. The first, told primarily through the figurative silicone sculptures and photographs, is about doing the wrong things for the right reasons and whether we can use technology to solve environment problems. The second story is more general and can be found in all the works. It is about the way that some stuff begins to take over places where it doesn’t really belong. A third story is about babies. Actually, it is not really a story; it is more a recurring image. Everywhere you look in this show there are babies. I have just had a baby myself. People now ask me whether I think that experience will change my work. I’m not sure, but there have been babies in my work since the early nineties so there is no dramatic change there.

The ‘Nature’s Little Helpers’ series of sculptures and photos focus quite specifically on the first story. The sculptures present a series of creatures that I have designed to ‘assist’ a series of the endangered Australian animals. In the photographs, we follow more closely one of these creatures, ‘The Bodyguard (for the Golden Helmeted Honeyeater)’. It is very seductive to think that we could find a simple technological solution to complex ecological problems such as extinction. It is far more exciting to talk about genetic engineering than to designate a large area of habitat/real estate as national park so that dozens or even hundreds of native species might be given a better chance of survival. We have a long history of scientifically introducing new stuff into our environment in order to make it better, however it has rarely worked. Yet our relatively recent understanding of genetics seems to have left us ready to add yet more stuff in an unprecedented way. Why do we think we have it all figured out now?

The sculptures present a series of quite considered propositions for helper species while photographs play out the possibility of the ‘success’ of such an idea. With the sculptures, I have been able to present my creature ideas in a fashion that is direct and strangely believable. People are fascinated by the tiny details, the moles and wrinkles, which almost forces them to accept the possibility of their existing. I also deliberately steer clear of too much sci-fi or horror in my creatures. They stay rooted in the possibilities of real animals and the real animal world is just as weird anyway. These creatures are almost too easy to accept. Like the extraordinary bio-geno-tech discoveries that these creatures are based on, the bizarre and unbelievable becomes the obvious and commonplace almost instantly.

Against this we might see the ‘Cyclepups’, my tadpole-like motorcycle embryos. While they do trace an obvious formal lineage back to the ‘Car Nuggets’, they are conceptually closer to ‘Nature’s Little Helpers’, in that they represent a similar nebulous blending of technology and nature. ‘Cyclepups’ reverse the idea of the ‘genetic engineering of nature’ into a ‘genetic naturalisation of engineering’. However, it is less easy to be seduced into believing in the self-conscious fantasy of embryonic motorcycles. Obviously there are limits to our belief in what we can do with technology.

Another pair of works that I find strongly linked are the sculpture ‘Radial’ and video ‘When My Baby (When My Baby)’. I’m far less in control of what these works are about, but they seem to make sense. In both works we have the narrative of colonisation or symbiosis, which is a bad and a good way of thinking about the same thing. These works show sort of familiar spaces that are overrun and ultimately transformed by other stuff. In the case of Radial it is this fecund, organic, decorative, barnacle-like growth that looks a lot like the blobby stuff in an earlier video (‘Plasmid Region’). I think this transformation makes the tyre more interesting and beautiful, but of course it no longer works. In ‘When My Baby (When My Baby)’ another transformation takes place over the course of a few minutes. It does change back; however once we have seen it we can never return. When I started this work, I was thinking of Peter Allen. I’m not sure why.

This symbiosis/colonisation/transformation story can be seen in all of the works. Whether it is the colonisation of the biological through genetic engineering, or the hosting of one species by another, or the Bodyguards infesting the suburban sprawl which is itself overrunning the marginal habitats of endangered species, or biological processes transforming the mechanical or little blob things altering flesh, this idea recurs throughout the works in this exhibition.