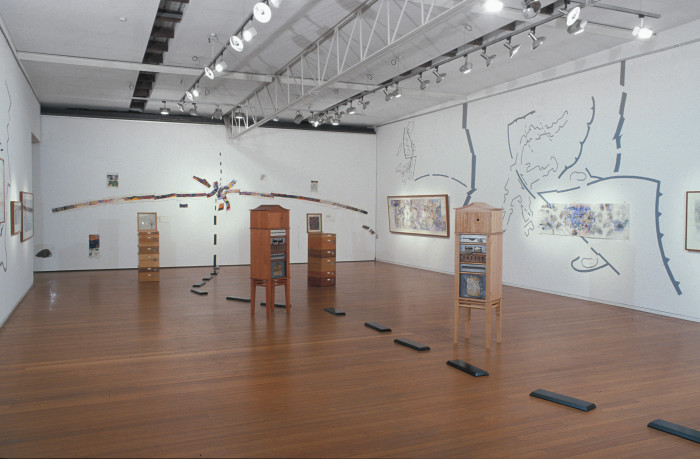 John Wolseley, one of Australia's best-known painters has spent the last four years travelling between Australia and the archipelagos of Indonesia and Malaysia to the North.

The exhibition at Roslyn Oxley9 Gallery has evolved out of John's long held fascination with the minutiae as well as the larger history and evolution of our continent, particularly the margin where the Australian bio-geographical region meets the Asian region.

The exhibition investigates how the landmasses of this area have moved towards each other and dramatically collided in recent geological time along what is known as 'the Wallace Line'. This line was named after Alfred Russel Wallace, one of the 19th century founders of biogeography, who was obsessed with why there was a dramatic division between the two different faunas and floras which seem to run in a line between Bali and Lombok in the south, threading its way north between Borneo and Sulawesi.

At this mysterious line of demarcation—the Wallace Line—where cultural, botanical and animal worlds come together, there are fascinating juxtapositions, and subtle transformations as one landscape, plant or animal type give way to an adjacent strange and unfamiliar one. These are the kinds of zones of transformation, where one system meets another, which has so often been the subject of John's work.

In the gallery, you enter into a three dimensional diagram of the collision, faulting and drifting of the Laurasian and Australo/papuan tetonic plates. The gallery space is defined by huge geological wall drawings on which are set exquisite and intimate watercolours of the diverse life forms which have evolved on these moving continents and archipelagos.

A three dimensional dotted line on the gallery floor represents the Wallace Line. The exhibition features for example comparisons of leaf forms from each side of the Wallace line and bird plumage from Java juxtaposed with specimens from West Papua. Also included are Tapirs, cloud forest mosses and a series of beautiful cabinets devoted to extinct species. These combine to make the exhibition a rich mediation about the earth and our place on it.

As John Wolseley says "I am trying to give form to my obsession and fascination with the way every living species is part of the huge dynamic movement of the earth and its evolution. If one looks at the frond of a fern say, in its design and structure, there lies the history of the Earth."

A 60-page catalogue accompanies the exhibition,Tracing the Wallace Line, with an essay by Paul Carter, and journal extracts by John Wolseley.