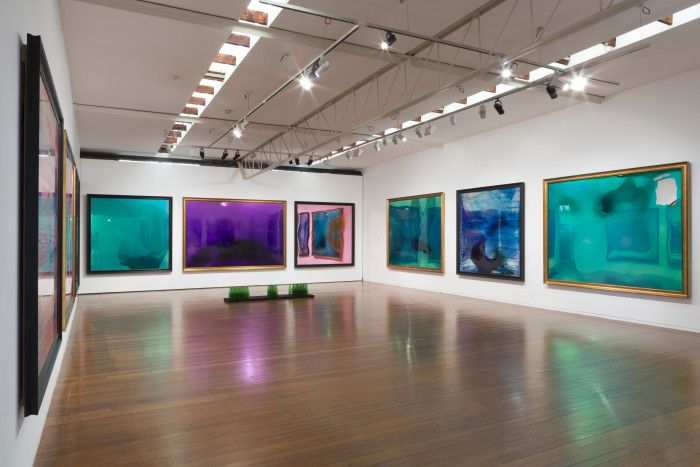 Painting does not take its own legitimacy for granted.

Contemporary Painting, conceptual painting understands the gesture not as a singular event but as a strategic intervention into the history of art, reflecting conditions of art, producing situations that show art in a light that is constantly new and changing.

Painting is essentially conceptual, by positioning a work within a particular set of external references,  it self-referentially and self-critically addresses its material qualities as well as the symbolic grammar of its own formal language. This means that this gesture essentially derives its critical force from the structural self-inquiry of a medium-specific art practice. It takes it to another level. Painting as conceptual practice, first by what it is not and what it opposes. The significance of such a strategic intervention in the field of art distinguishes it sharply from the normal understanding of the historical validity of the work of art.

Today a strategic reading of Painting is strictly anti-historicist: it does not believe in the exhaustion of things, in the linear genealogy offered to us by art criticism, always ready, unconsciously or not, to follow the demands of the market in search of new products, but neither does it believe in the order of a homogeneous time without breaks, such as art history likes to  imagine.

This conceptuality, however, only exists as a potential. Consequently, we differentiate between a progressive type of painting, one that recognises and develops this conceptual potential, and a more conventional painting that relies uncritically on a traditional understanding of the medium. In order for the conceptual potential to be activated, a painting must produce its own justification by means of continuous formal self-scrutiny and the creation of contextual relations.

The medium-specific approach to painting is still possible in artistic practice and in critique. All it has lost is its status as self-evident. Since painting is realised today within the horizon of conceptual practice, it must be grounded in a context that is no longer its own. That means, on the one hand, that an appeal to the specifics of the medium as its sole justification is no longer possible. Painting can no longer just be painting. Today it is also necessarily a form of conceptual art, and as such it must be judged, and hold its own, in relation to conceptual practices in other media.  But this also means that painting can take strength precisely from the fact that by way of an immanent intimate dialogue with its own history and conditions as a medium it arrives at a strategic self-justification within a broader wider world. Forcing Painting potentially into a more enthralling, adventurous and critically engaging approach than any other media.

Dale Frank is one of Australia’s foremost contemporary painters. Recently, Frank was included in the 2014 Adelaide Biennial of Australian Art: Dark Heart at the Art Gallery of South Australia, curated by Nick Mitzevich. In 2013, his work was featured in Personal Structures at the Palazzo Bembo as part of the official program of the 55th Venice Biennale.  A major solo retrospective of his work was held at the Museum of Contemporary Art, Sydney in 2000. He has been included in three Biennales of Sydney (1982, 1990 and 2010) and he was selected for the important survey exhibition, Contemporary Australia: Optimism at the Queensland Art Gallery | Gallery of Modern Art, Brisbane (2008). In 1983, Frank was included in the exhibition ‘Panorama della post - critica: critica ed arte’ at the Museo Palazzo Lanfranchi in Pisa along with Thomas Lawson and Anselm Kiefer. In 1984 Frank was included in the Aperto section of the Venice Biennale and ‘Junger Europaischer Maler (Young European Painters)’ section in the exhibition, ‘Europe-Amerika: 1940 to the Present’, at the Museum Ludwig, Cologne. Frank’s paintings are held in every major public collection in Australia as well as museums worldwide, including the Museum of Fine Arts, Boston, the Solomon R. Guggenheim Museum, New York and the Kunsthaus, Zurich. A major monograph on Dale Frank’s work So Far: the Art of Dale Frank 2005-1980’was published in 2007. Dale Frank has been represented by Roslyn Oxley9 Gallery since 1982.