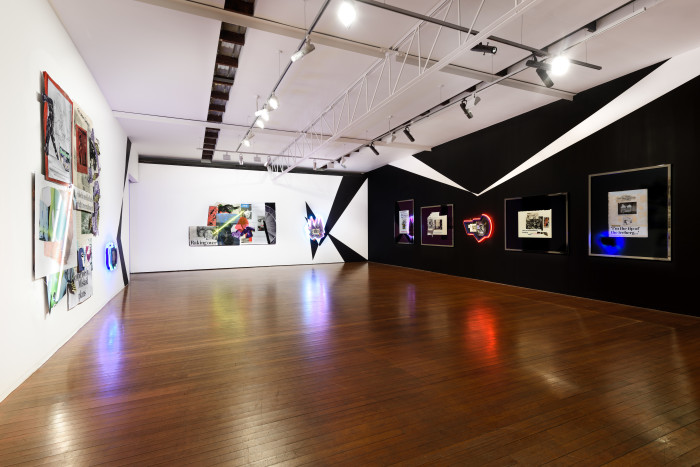 The title of my show is taken from a newspaper headline “This Year, be prepared”. It suggests the unfolding of 2020 where human beings have had to rethink our own existence. Bushfires, a global pandemic, impacts of fishing and plastics, religious and political control, and the BLM/Indigenous and Trans Lives Matter movements internationally, are currently demanding deep and complex responses. Yet, like many others, I am aware that we are on repeat, as desire for fashion and commodity continue to compete with these concerns. It is what bubbles to the surface that really strikes a chord: struggles for more awareness of environmental destruction, human rights, sovereignty and the health of the planet and each other. These are not new issues, but the speed of their fruition is driving us all to new anxieties.

This Year originates in a series of collages Brook Andrew recently made from an extensive archive in his Melbourne studio. In frantic actions of cutting and pasting the artist combined disparate elements of printed matter, from contemporary newspaper headlines, fashion magazines and mid-century comic books to historical anthropological texts and an original edition of engravings from the complete works of British satirist William Hogarth (c. 1860). The juxtaposition of contemporary sources with the historical, and the popular with the academic, reveals the ways in which the media and visual culture continue to nurture obsessions with capital, race and catastrophe – and influence modes of being that sway from hope and joy to ignorance and despair. The creation of This Year draws from a method that the artist has developed in previous works including the print series Danger of Authority (2009), the video work SMASH IT (2018), and in his museum interventions that convene the old with the new. His aim is always to open up - split apart and out - the notion that there is one linear timeline or trajectory for humanity, of which our responsibilities are increasingly out of control.

This new body of work began with the intimate collage, as sculptured paper. Three series complete This Year: original collages trapped within sculptural forms made from glowing neon, timber and Perspex; blown-up C-Type hand printed metallic photographs; and massive re-sized collages created from a range of printmaking methods and mixed media. Andrew embeds his own practice in collaboration and This Year is no exception; he has worked alongside long-time collaborators Trent Walter, Mark Chapman, Stewart Russell, Danica Miller and Sandra Barnard.

This Year will be an immersive experience that celebrates and challenges the progress of human learning since at least the Industrial Revolution: is our concern for the balance of human involvement with the environment and resolving inter-human conflict authentic or are we on repeat?

Brook Andrew (b. 1970 in Sydney. Lives and works in Melbourne. Wiradjuri/Celtic.) is an interdisciplinary artist who examines dominant narratives, often related to histories of colonialism and modernity. His art practice, including museum interventions and curatorial projects, aims to make neglected stories visible and offer alternative choices for interpreting history in the world today. Apart from drawing inspiration from vernacular objects and the archive he travels internationally to work with communities and various private and public collections.

In 2019, Brook Andrew completed a year-long Australia Council International Residency at the Künstlerhaus Bethanien in Berlin where he reflected on the complexity of memory sites in Germany. In 2018, he concluded an ambitious, three-year-long Australian Research Council grant, Representation, Remembrance and the Memorial. This project was designed to respond to the repeated high-level calls for a national memorial to Aboriginal loss and the frontier wars. In 2017, Brook Andrew was the recipient of the prestigious Smithsonian Artist Research Fellowship at the Smithsonian Institute in Washington, D.C. and in 2016, was appointed Photography Residencies Laureate at the Musée du quai Branly, Paris.

This Year  will be Brook Andrew's third solo exhibition at Roslyn Oxley9 Gallery.