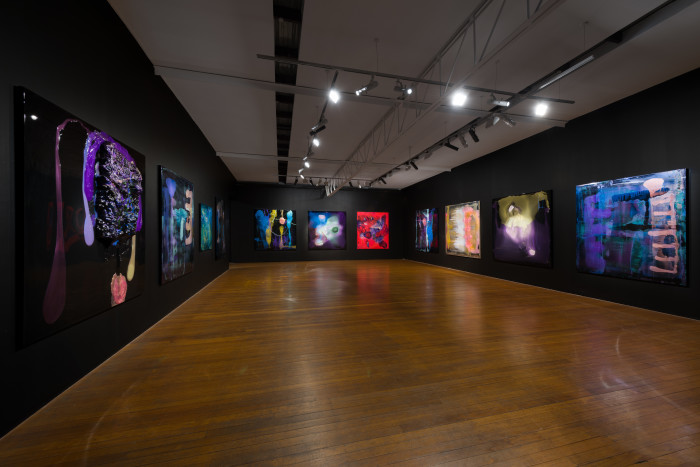 A directness is necessary (strife is necessary). Too much discussion has verged into poetics for either reasons of fashion or inability. The tension of opposites is necessary, strife is necessary, be it even just a 'contradiction'. It is 'war' rather than peace, or stillness that demonstrates the changes or flux that is the root of being, that makes it clear that nothing, not even the most stable seeming is really at rest.
— Dale Frank, 1983

Frank's space depends instead on that measured emptiness as a flat surface which sometimes proposes an illusion of solidity by its very ebb and flow. "Form" cannot exist since no boundaries occur. Lines are vectors, not contours, the dense pattern functioning as a force-field in which energies or auras are plotted. The emotional disturbances in his real-time work, each with individual features and occupying its proper temporal span, seem perfectly translated. Perfectly, and again abstractly...

Jasper Johns once admitted that only three art-historical statements interested him. One was Leonardo's opinion on line as representation of the limit of the body. Like Johns's, Frank's "field" solved the same problem in a different way. But is he violating that solution by involving himself so completely with matter. The answer lies in the continuum of that world which is taking shape: solipsistic, sublime, exotic, unfree. More and more the "strife" Frank has said he desires in art, his gesture of swerving or interference, the communicated tension of the performances, seem identical — tests of consciousness, that sudden fright or pinch by which we make certain we are still alive.
— Stuart Morgan, ARTFORUM, VOL XXII, No 10. 1984

This is Dale Frank's 34th solo exhibition with the Roslyn Oxley9 Gallery.