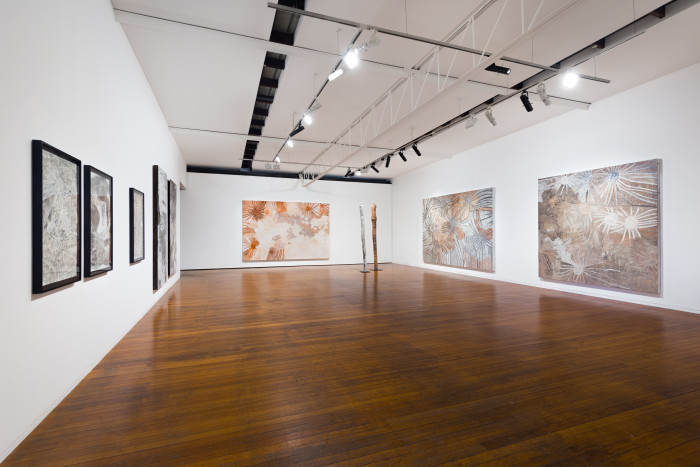 I was sitting under a casuarina tree at Daliwuy Bay with young Indigenous curator Glenn Iseger-Pilkington waxing lyrical about Nyapanyapa Yunupingu and her art. It was 2011 and Glenn was curating her and Gunybi in the Western Australian Indigenous Art Awards of that year. He had come up to meet the artists and was trying to get an understanding of Nyapanyapa and her art.

It was one of those groundhog days at Yirrkala. Get in the ‘Troopy’, drive around town five times to pick up and deposit items and people that may or may not be going hunting that day. Have a bumpy run through the strobing stringybark forest before suddenly emerging at a crescent of clear blue sea framed in dead-white sand.

Pile out and everyone heads their own way once a fire has been lit, a camp raked and set, and the mats laid down. Men with spears wade into the mangroves, women with welding hammers and buckets attack the maypal (shellfish). What is in season is on. The tide is king. Kids are frolicking and making imaginary worlds. A big pannikin holds the tea and morsels come back regularly to be expertly cooked on coals.

Damper gets rolled out and then tucked in under the hot sand from where the fire has been shifted. Lashed with condensed milk and washed down with black tea. Crunchy orange heads of hermit crabs. Smoked mangrove oysters cut into one long aerial root open on the fire, fifty at a time. Giant trevally baked in a ground oven with granite chips and termite mound covered over with paperbark and sand, butchered according to Law.

Mountains of dhän’pala fist-sized clams appear by the sackful. A fire warden turns these and tends with a deft stick hardly breaking her conversation. Gossip and unspoken digs at absent miscreants. Sly smiles and loud guffaws at the gaps in the words as we download the things that shouldn’t be said about the people whose lives we share too intimately in a communal system. Scare the kids out of the water with an imaginary crocodile in rhythm with the beast.

The smell of smoke and sound of snores as the afternoon progresses. A couple of guys appear in the distance and we surge again. Where’s another pot? They’ve got stingray. Wordless apportionment of roles. The ripe liver has to be cut out, the gall bladder excised. Saltwater to boil and then the flesh removed from the cartilage.

It’s so easy to write these words because this is life. Like the day itself, I don’t have to think. I’ve lived this day so often it is life.

And like the misfit outsider I will always be, I am accepted. But I still try to earn that acceptance, which I never can. So I grab my spear and Glenn and I head off into the mangroves to do our bit. Glenn probably realises that he has backed the wrong horse here but as always is open minded and generous enough to follow.

Cut to two and a half hours later and we stagger back. Chafed, sunburnt, dehydrated, sunstruck and with a grand total of two measly mud crabs. We have thrown and missed at hundreds of targets real and imagined with no success. Glenn must be wondering what the hell he has gotten himself into wading thigh deep through monster-infested waters﻿ behind a fat old white guy who clearly has no idea. Two mud crabs stray into our path on the way home so we are not empty handed. We are greeted with the usual warmth and a cup of tea, oysters and damper. Drop the crabs by the fire and slump on the mat. Next to us is Nyapanyapa and I see that she has a cut-down two-litre Coke bottle full of baby mud crabs and it hits me.

‘That’s it!’, I cried. We have just walked for miles in search of an imagined bounty. We were thinking of what we could or would catch. And we were literally walking over these self-same crabs, which were running around within metres of where we had started. We couldn’t see them.

At this point I made the mistake of grabbing the bottle and gesticulating with it wildly, waving it in Glenn’s face as I tried to make my point. Nyapanyapa snatched it back and glared at me for such a poor attempt at daylight thievery.

The insignificant, the real, the actual crabs are sustaining and, more importantly, they are what is. The big people with the big ideas, big dreams and the big egos would not stoop to even see these little things. They’ve got bigger fish to fry. They haven’t got time for what is.

Nyapanyapa is in tune with the little things. The real. The actual. She sees clearly the insignificant. She dwells in a world of insignificance. She sustains herself from it. She is herself ‘insignificant’.

As a Yolngu artist who paints birrka’mirri, or anything paintings, rather than declaiming Yolngu Law through sacred design. As a tiny old woman who is basically deaf. As the little one with a quiet and gentle personality in a family of superhuman, loud overachievers. As the childless 13th wife of elder statesman Djiriny, who had 14 wives but only 11 children. As a Yolngu woman who doesn’t speak English in a world where all resources have slowly accreted to those that do, and who insist that all negotiations take place in that language.

Nyapanyapa’s sisters are amongst the brightest, strongest, loudest, biggest and best people I have ever met. Two of her brothers, of course, have been named Australians of the Year. She is never the one to step forward. In this family of leaders, she has always followed.

Her rise to ascendancy in the art world is a seeming contradiction to all of this. It is a conundrum that an essay like this is meant to solve. The explanation is begged. In the years of being a bystander to that phenomenon, I really haven’t cracked the code. Except perhaps in that moment of insight down by the beach.

As trite as it sounds, that endlessly recurring day is the physical truth of the Yolngu appreciation of time.

Albert Einstein wrote: ‘The distinction between the past, present and future is only a stubbornly persistent illusion’.1 He understands that ‘each moment fully exists without reference to past and future’.2

As does Nyapanyapa. Each stroke of her brush has no idea what came before it and no concept of what may come next. Amongst physicists this understanding of time is known as eternalism. It is also known as B-series, block universe or static time. But for Yolngu it is just time. A tense in which the past, present and future contemporaneously occur.3 Jesus was/is/will be crucified. Wait!! There is a 33-year-old man being tortured as you read this! We should do something!

So difficult is it for us to shake the stubbornly persistent illusion of the arrow of time. Some explain our bias away from the reality of the everywhen by using the analogy that our consciousness is like a torchlight and with that limited perception we misperceive the moving beam as movement of the landscape.

Another attempt to explain how we can be so confused is:

‘In this case our consciousness is like that of a fly caught in a dusting-mop which is being drawn over the surface of the picture; the whole picture is there, but the fly can only experience the one instant of time with which it is in immediate contact, although it may remember a bit of the picture just behind it, and may even delude itself into imagining it is helping to paint those parts of the picture which lie in front of it.’4

Hang on a sec. Weren’t we just sitting in the beach living that endless, infinitely repeated day? How did we get here? Are these paintings somehow about whacky grandiose conceptual physics?

Nyapanyapa is not English. To try to wrangle with who she is and where these paintings emerge from we cannot approach from where we are sitting. We are going to have to get up and shift our view. Move left, right, up or down. Look behind us, put our head on its side, get up a ladder, squint.

How can someone paint so many lines so patiently without any apparent plan, or anxiety about the outcome, which results in works that appeal to such a wide range of humans when the subject matter is either insignificant or non-existent? Well, just maybe because they are experiencing time differently to us. And could it be that this is what these paintings are expressing?

The Yolngu and Nyapanyapa’s father famously resisted the theft of their land in the Yirrkala Bark Petitions and the Gove Land Rights Case. They were unsuccessful. So, for 45 years, 24 hours a day, the top five metres of their country has been scraped off and sent overseas to be turned from bauxite into aluminium. The cost of the bauxite ore (less than $100 per metric tonne) in the process of making aluminium is completely insignificant in comparison to the cost of power to smelt it. Old engineers thus wryly describe aluminium as ‘congealed electricity’.

In a sense, an ugly but weirdly accurate way to see a work from Nyapanyapa is as congealed humility. Or congealed patience. Or even congealed timelessness.

This is the mark made by a being who exists in a dimension unpierced by the arrow of time. We respond to it because we too exist in that same dimension although our programming denies it. This is the reality of the little things that exist without calculation or cynicism. The little things that just are. Each little insignificant mark made by this little insignificant person is made just as it has to be made in that moment. It doesn’t adjust for what will happen next. It is not dreaming of a bigger picture and trying to fit into an imagined completed work. This is what spontaneity looks like. Not the cultivated spontaneity of drip paintings. Artists raised within the industrial system can only ever unlearn their way to spontaneity and its taint is never fully lost.

Returning to our seat under the mawurraki, the gaywangi. The djomula’. The casuarina tree. Whistling tree, the she-oak, Casuarina cunninghamiana. A tree that sits within the poetry of the songspirals of the Yirritja moiety in that tense of the past/present/future.

It is dropping its leaves. Or rather, needles. Look down. They are long thin marks on the white sand. About the size of one of Nyapanyapa’s brushstrokes made from ground ochre with a brush made from the straight hair of some young girl. Look at the way the needles fall down upon each other. Falling where they land in cross-hatch patterns. A random fractal complexity. A carpet of mindless patterned occurrences that somehow soothes our instinctive need to be in the presence of such organic designs. A collection of little things.

Could a human be so much a part of that rhythm of things that she could channel it into art that approximated the same genius? Is that what satisfies us about being with Nyapanyapa’s art when it is so devoid of important meaning or statement? Only a fool would ask. And the exercise of trying to explain Nyapanyapa beyond feeling the art itself is the opposite of what her art is about.

Probably time to lie back under that tree and drift off to join the other snorers lined up along the mat. Until next time.