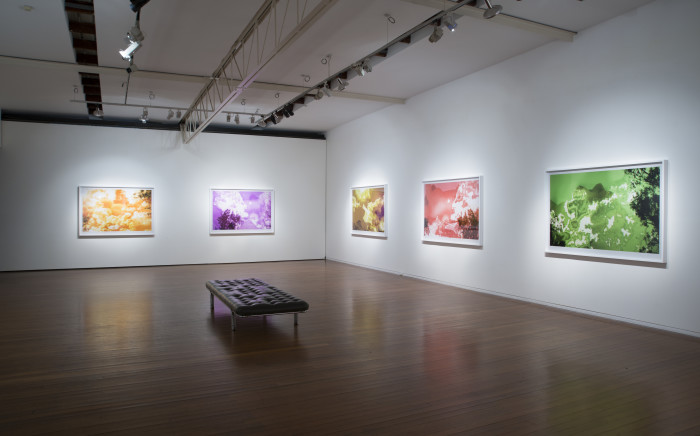 Spirit Landscapes is comprised of five new photographic series and a moving image work. The exhibition explores spirituality, memory in landscape, and the supernatural. Through the use of personal and universal histories, Spirit Landscapes is a complex meditation on the significance of land and place.

This series depicts frame grabs from 1950’s Hollywood Western films or rather ‘Cowboy movies’.  The dreamy heroines gaze with love at ‘their country’, which is in fact stolen Indian land.

This series of 8 triptychs depicts ‘spirit energies’ captured in haunted places. These are ‘straight’ photographs with no digital manipulation aside from added contrast and colour. At the time of photographing the artist could not see anything and shot with her camera into empty space.

Six images depicting the suburban streets that the artist roamed as a youth. The water crayon texts are her memories associated with these places.

Six coloured tourist brochure like views of the Aboriginal government mission that some members of the artist’s family were relocated to in the 1920’s.  Many of her relatives still reside there. The artist presents the images as fractured scenes.

A five-minute, low-tech moving image piece showing brothel doors opening and closing during the current Australian mining boom.  Interspersed is the image of a large mining ‘hole’.  The work attempts to connect the ever-present transaction between mining and prostitution.

Tracey Moffatt has exhibited extensively since her first solo exhibition in 1989. In 2012 a retrospective programme of her films was held at the Museum of Modern Art, New York. Moffatt first gained significant critical acclaim when her short film, Night Cries, was selected for official competition at the 1990 Cannes Film Festival. Her first feature film, beDevil, was also selected for Cannes in 1993. Moffatt was selected for the international section of the 1997 Venice Biennale (curated by Germano Celant) and has also featured in the bienniales of Sydney, Sao Paulo (1998) and Gwangju (1995). She held a major exhibition at the Dia Center for the Arts in New York in 1997-98 and in 2003, a large retrospective exhibition of her work was held at the Museum of Contemporary Art, Sydney which also traveled to the Hasselblad Museum in Sweden. In 2006, she had her first retrospective exhibition in Italy, at Spazio Oberdan, Milan. In 2007, her photographic series, Scarred For Life, was exhibited at the Guggenheim Museum and her video, LOVE, at the Brooklyn Museum in New York. Also that year, she was awarded the prestigious Infinity Award for art photography, selected by an International panel at the International Center of Photography in New York City. Tracey Moffatt has been represented by Roslyn Oxley9 Gallery since 1998.