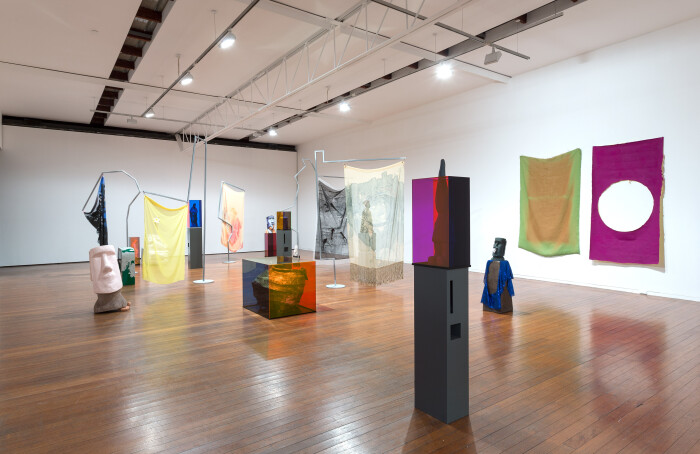 Five delicate flags mark the way as we navigate Mikala Dwyer’s installation Soft Relics. Steel supports distort and bend under an omnipresent weight conveyed by the totemic relics that surround them.

The silhouette of a gnome, guardian of the underground and keen alchemist, holds post at the entrance of the exhibition.

A block of raw clay lies waiting, wet and wrapped in plastic, full of potential and malleable energy. Nearby, one of the blocks infinite trajectories takes form, squeezed and moulded into a considered shape by the artists’ hands.

Nefertiti, known for her defiant practice of only worshiping Aten (the sun disc god), begins to break the mould of her earthen glaze, gazing through a stained veil to a piece of sun bleached hessian that adorns the wall.

Three monolithic Moai - repositories of supernatural power – have had their iconography appropriated, mass produced and repurposed, yet still hold a gravity and presence in the room, proving their mythology will remain long after we are gone.

St. Jude, who sits central to the exhibition, is said to be called upon in prayer when hope is needed in times of desperation. Opposite, a broken cauldron is no longer able to safeguard the precious metals from the earth that it once kept, nor can it be used to brew its healing potions.

The motif of the letterbox returns, with a gnome, Nefertiti and St. Jude all offering us a place to leave an unanswered letter, a note, our thoughts, our prayers.

A green ‘U’ (‘YOU’) now becomes a ‘ME’ in its inverted position. It is slightly worse for wear, showing signs of cracking beneath its silicone bandages. All the while Mary patiently holds her position, arms extended and palms exposed, trying to shift the impossible.

Mikala Dwyer has been represented by Roslyn Oxley9 Gallery since 2009.