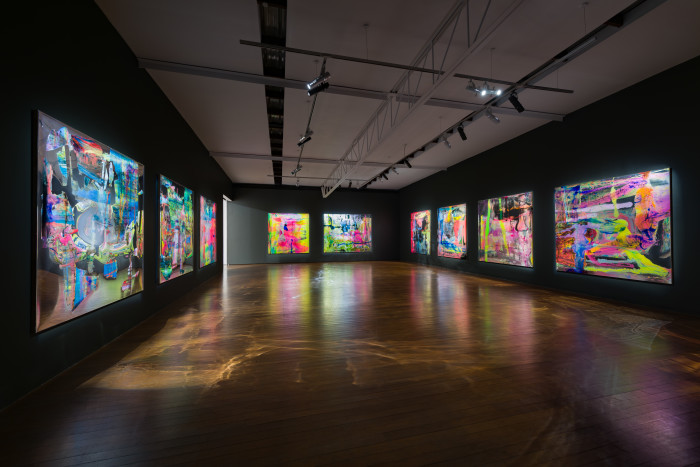 I disagree with the idea that artworks exist only insofar as they are available for human viewing. Artworks tend to be more interested in pointing out how they exist, act, and “live” beyond the realms of human perception, a paradox of sorts given the contrived nature of artworks.

With the new addition of powdered pigments, there is a watercolour-like translucency to these dazzling new works that make them shimmer in ethereality, like floating cosmos, lost in the dream of a summer’s day. At times with a glaring vibrancy, they draw us in. They are addictive: swirling layers that seem to capture eternity and defeat time.

They are poetic creations of our inner worlds: invisible realms, places we wish we could visit, dreams we’ve never had, landscapes we hope to see. Frank’s expert handling of colour with both a harmonious precision and a clashing exuberance through calculated scientific equations allows for an enticing exploration of the self and our relationship to art.

With their brilliantly reflective surfaces, the works become both the observed and the observer. Frank keeps us at a distance conceptually, gifting us with his seductive outer world which becomes us, the viewer and the world we have stepped into. Reflected back on ourselves, like Narcissus, we see the world within, often blurred, distorted or partially exposed. Frank’s explorations offer up a considered discourse into the history of painting, questioning both the artist's and the viewer's role while holding space for this discourse, just like his paintings, to change and evolve over time.