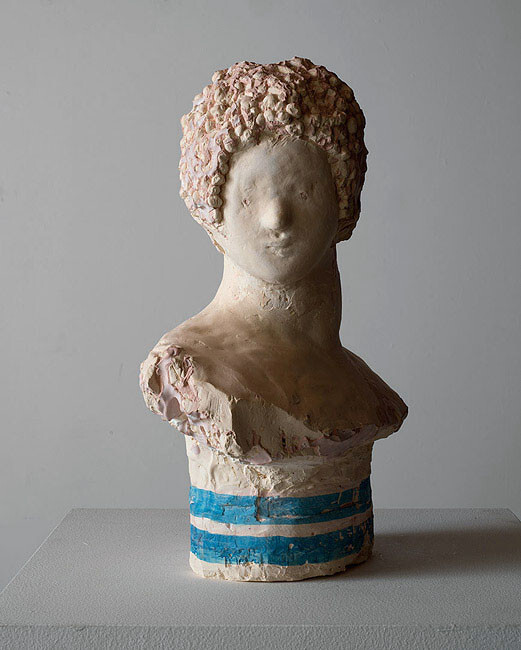 Linda Marrinon’s sculptures are an enchanting mix of classicism and whimsy. They are formal works that reference art history but remain playful through Marrinon’s approach to proportion and scale. The figures exude a certain confidence as they inhabit the character or period ascribed to them. But these striking personas emerge somewhat unexpectedly from the sculpting and casting processes. Marrinon does not begin with a specific character in mind, instead allowing the process to guide her. Accidents and technical surprises become features and textural details that are richly suggestive of a particular character or period. Marrinon then completes the figures with carefully considered sartorial details, often formed from plaster-soaked muslin or hessian. The warmth and suppleness of the fabric draping is retained through the process. Just as ancient Greek and Roman sculptures were brought to life with colourful paint, Marrinon’s classical figures are enlivened with pigmented plaster and decorative accessories.

Despite the uniqueness of each figure’s attire, the delicate treatment of each face remains remarkably similar across the group. The facial features are reduced to an archetypal essence that doesn’t account for gender, but remarkably, manages to convey incredible poise and mood. This simplicity of features also results in a prevailing quality of innocence.

Linda Marrinon has been exhibiting with Roslyn Oxley9 Gallery since 1983. She has been the subject of major survey shows at The Ian Potter Museum of Art, The University of Melbourne and The Institute of Modern Art, Brisbane, and she currently has a group of 10 sculptures on display in the foyer of the Art Gallery of New South Wales. Marrinon has been included in numerous group exhibitions including, Mix Tape 1980s: Appropriation, Subculture, Critical Style at the National Gallery of Victoria, Melbourne (2013); Lost and Found: the TarraWarra Biennale of Art at the TarraWarra Museum of Art, Victoria (2009); Making it New: Focus on Contemporary Australian Art at the Museum of Contemporary Art, Sydney (2009); Word at the Museum of Contemporary Art, Sydney (1999) and Australian Perspecta (1983 and 1999). Marrinon’s paintings and sculptures are held in every major state gallery as well as numerous private and corporate collections. In 2001, Marrinon was a recipient of the prestigious Samstag Fellowship, which permitted her to study at the New York Academy of Art. In 2008 Chris McAuliffe authored a monograph on Marrinon’s work, Let Her Try, published by Craftsman House. Recent Sculpture is Marrinon’s eleventh solo exhibition with Roslyn Oxley9 Gallery.