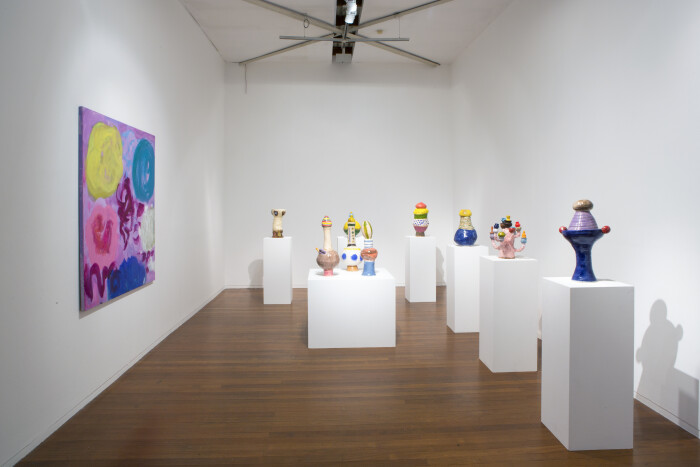 An assemblage of exuberant artefacts, Angela Brennan’s Rustic Deities converses with the classical history of ceramics and painting, through the artist’s characteristically jocular optic. Sensual and robust, Brennan’s clay renditions navigate the line between the domestic and divine, continuing her playful enquiry into conceptual paradox and form.

Brennan is known for her luscious treatment of paint, seen most recently at Roslyn Oxley9 Gallery in Infinity Plus One (2011). Since then, Brennan has translated her interest in paint’s infinite permutation of form to the ancient tradition of ceramics.  Responding to the fluidity of the medium, Brennan’s ceramic pieces bear the mark of their organic evolution. At once familiar and unique, the asymmetry of the work conjures the aesthetics of our natural world – an imperfect kind of beauty. Yet a paradox is inherent to these forms: their evocation of domestic objects such as urns, candlesticks and jugs is destabilized by their dysfunctional status as art objects.

Rustic Deities departs from Brennan’s previous work, as it engages with the history of art through its connection to ancient ritual and celestial order. Inspired by the distinctive qualities of Cypriot ceramics spliced with the saccharine palette of Pop Art, her works are cheekily titled: ‘Gaia’ the Greek Goddess of the Earth,  ‘Artemis’ the Goddess of the Hunt and ‘Pan’ the God of the Wild. However belying Brennan’s mischievous engagement with classical mythology, is an earnest inquiry into the genesis of artistic forms.

Glenn Barkley recently described Brennan’s work as “possess(ing) an innocence that can come only from fresh eyes and the discovery of a new material.”[1] Through Brennan’s artistic curiosity, she continually reinvigorates her creative practice and the artistic traditions she explores.

Angela Brennan has exhibited extensively in Australia and overseas since 1989.  Brennan graduated with a Bachelor of Fine Art from RMIT University in 1981 and received a Bachelor of Arts from the University of Melbourne in 1992. Brennan was recently included in the National Gallery of Victoria’s major exhibition of 2014, Melbourne Now. Selected solo exhibitions include the survey exhibition Angela Brennan: Every Morning I Wake Up on the Wrong Side of Capitalism, Monash University Museum of Art, Melbourne, 2006 and Plantation, TCB art inc., Melbourne, 2011. Group exhibitions include NEW 2013: Selected Recent Acquisitions, The University of Queensland Art Museum, Brisbane, 2014 Kaleidoscope: Art and Colour, National Gallery of Victoria, Melbourne, 2011 and Roads Cross: Contemporary Directions in Australian Art, Flinders University Art Museum & City Gallery, Adelaide, 2012. Brennan was recently awarded the Australia Council residentional Rome Studio for 2015. Angela Brennan has been exhibiting with Roslyn Oxley9 Gallery since 1993. Rustic Deities will be her eleventh solo exhibition with the gallery.