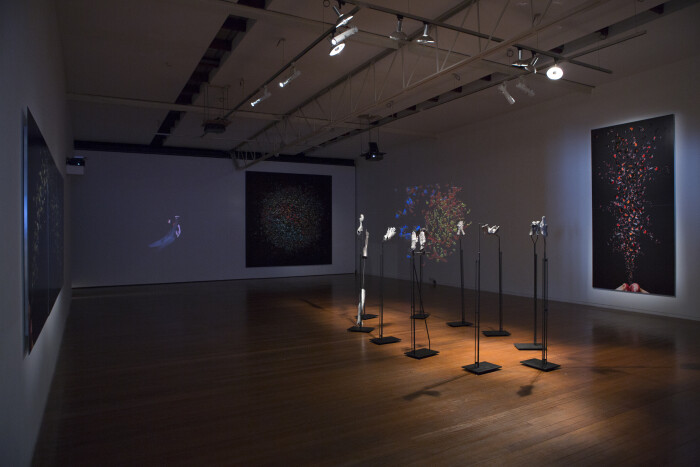 “What I wanted to highlight in Remaking the World were these different ‘environments’ in which the work exists; one quietly invisible, the other visibly intense.” – Julie Rrap

Julie Rrap’s dynamic body of work, Remaking the World (2015), features video installation, sculpture and photography, constructing a constellation of relations that explore the dual states through which art comes to exist.

Her 12th exhibition at Roslyn Oxley9 Gallery, Remaking the World is composed of two distinct elements. Upon entering the gallery, we encounter Rrap’s Remaking the World: Artists Dreaming: a moving-image series that depicts thirty artists in the depths of sleep. While on one hand highlighting the mundane quality of the act of sleeping, Rrap explains that; “The idea sparked more from my musing on when art becomes “art”. I was reflecting that the space of dreaming … is really where the rawness of art happens.” In this, the work invites audiences to speculate as to what each artist is imagining, and how this contemplative space may bear upon the work they bring into the world, emphasizing, in Rrap’s words, that; “Museums of the world across time are in fact giant storehouses of individual ‘remakes of the world”.

Upon entering the main gallery space, we find Remaking the World: In Her Image. Comprised of photographs, sculptures, projections and an interactive piece, the intense atmosphere of this space serves as an ironic return to Plato’s allegorical cave. As the theatre of shadows that make up the material world, Rrap’s take on this myth materializes the artistic imagination, presenting a wunderkammer of moving and static images that almost tumble over one another. In this, Rrap considers the capacity of the human imagination to conjure the world in many different ways, while also conveying that  “when any artist is conceiving an idea, a process, a making, there is an openness and a sense of risk that is a necessary component of the shift between thought and action, between an idea and an actual ‘thing’.” Such intimate interactions between the imagination of the artist and that of the viewer, is what Remaking the World attempts to activate.

Julie Rrap has been a major figure in Australian contemporary art for over three decades. Most recently, the Ian Potter Museum of Art held the solo exhibition 'Julie Rrap. Remaking the World' (2015). Other solo exhibitions include 'Rrapture' at the Newcastle Art Gallery (2014), 'Julie Rrap: Off Balance' at Lismore Regional Gallery (2011), and 'Body Double', a major retrospective held at the Museum of Contemporary Art, Sydney (2007). Rrap was included in the 'Australian Show' (1988) which toured to the Frankfurter Kunstverein in Germany and major museums in Japan. Other significant group exhibitions include ‘Biometrics’, New Media Gallery, Anvil Centre, Vancouver (2014), ’Theatre of the World’, Museum of Old and New Art, Tasmania and La Maison Rouge, Paris (2013-14), the 14th Jakarta Biennale, Jakarta (2011),  'Revolutions – Forms That Turn, the 2008 Biennale of Sydney’ (curated by Carolyn Christov-Bakargiev), 'Turbulence: the 3rd Auckland Triennial', Auckland (2007), 'Fieldwork: Australian Art 1968 – 2002' at the National Gallery of Victoria (2002), 'Systems End: Contemporary Art in Australia', which toured Japan and Korea in 1996. Julie Rrap’s work is held in major public collections as well as many corporate and private collections. Rrap was selected for the prestigious Clemenger Contemporary Art Award at the National Gallery of Victoria in September 2009. Her video work, '360° Self Portrait' won the 2009 University of Queensland National Artists Self-Portrait Prize. 'Remaking the World' will be Julie Rrap’s twelfth solo exhibition with Roslyn Oxley9 Gallery.