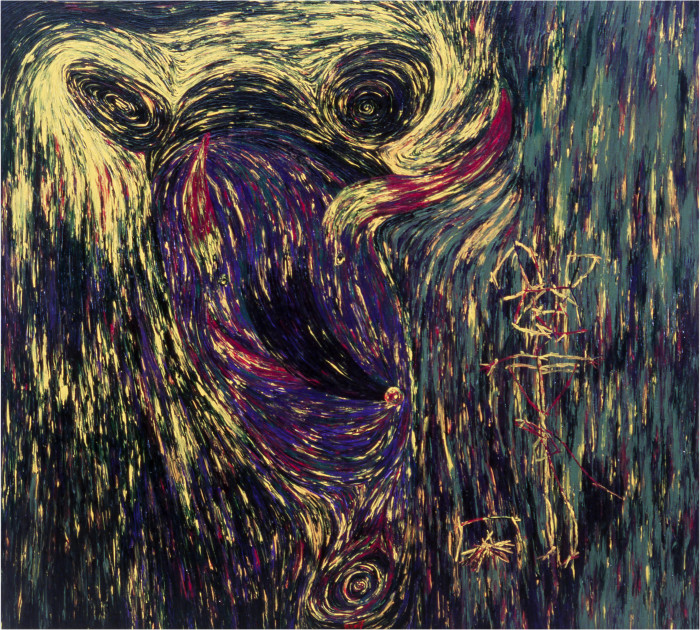 Dale Frank The holiday out for the two mickeys while mickey thinking he was alone, 1983, acrylic on canvas, 160 x 178 cm

A directness is necessary (strife is necessary). Too much discussion has verged into poetics for either reasons of fashion or inability. The tension of opposites is necessary, strife is necessary, be it even just a 'contradiction'. It is 'war' rather than peace, or stillness that demonstrates the changes or flux that is the root of being, that makes it clear that nothing, not even the most stable seeming is really at rest.

We are undergoing a time that is not, the 'big' end. Indeed the idea of a big end is to be reassessed, like all the other needed prerequisites of modernism and modem life. Some years ago with the public awareness of the so called return to painting (to hand art), this shifting of focus, created outcries of decadence, the end of art, war art (in a funny way they were right, but not in the way they thought). Artists in the past few years have taken influences from differing periods in art, in some cases they have cared little for quality, and more for production. But these immediate aspects are not to be characteristics of an art. There has been such a jarring and dislocation of time and ideas, that these aspects were more like the babbling of a child, the child pulling everything into his mouth. It has been a time, in these years of clearing ones dizziness and finding focus. Where are we now then? We are not lost in a sense. For all notions, not only in art, but throughout society are in the early stages of reorientation to the changed personality. The art is not (will not) taking examples from throughout different periods, like the child. There is a realisation of this altered personality, an altered outlook.

The notions associated with modernism are of no relevance, but to history the idea of one art influence development after another is history our notion of the aesthetic is ridiculous. Our notion of a 'big end' war is equally funny, very funny. There is, and there must be, a search with artists for an understanding of a present notion of the aesthetic. This understanding is being seen. It is felt and seen in glimpses still. No one yet has captured it with their words.

A condition exists now, of every man against every man. It is a matter of our new 'social' personality jarred. There must be new definitions and altered under­standings. A part of the new definition is the notion of war. Our notion of war has been similar to the French at the beginning of WWII having cavalry dress rehearsals. War has gone further than just revealing the nothingness of it all. We are not at war, but we are in war: A condition of every man against every man, that is a matter of attitude, rather than event. The front line then is the face. In our war state nothing can be unjust. This is our present in war. Each man is a front, and a universe: Each man is a centre. There is a ¢sire for another attitude and definition of this 'humanness', along with the creation of another attitude of aesthetic.

With our total undeclared war, there is the implication of the absence of the slightest hint of paradise or pastoral retreat in the general wilderness of death or cancellation.

It is not strange that the 'underground' of the '60s, a highpoint of modernism, was the avant guard, while the underground of the '80s is merely an aesthetic fallout shelter.

The development of a new aesthetic, an altered aesthetic, a new point of view on the possibilities of art, puts existing works in jeopardy by subjecting them to fresh evaluation, their value, even the understanding of their nature, their truth, can radically change. What one rejects determines as much, what one accepts.

There is still much painting caught into the open structure of modernism. Luxury painting, that has lost faith with itself, and in compensation attempts to emphasise the pleasure principle with new explicitness. Above all these open structure modernists insist that subject matter does not matter, when it is the problem of aesthetics and art now to show that it may be all that does matter.

With the search for new definitions of this altered aesthetic, a search in this altered structure, a closed structure. A direct plunge into subject matter is demanded these days, rather than the fineness of form and pretty painting. The modernism from Cezanne's Apples becomes just luxury, left to be cancelled. Apples are just apples. The open structure of Matisse and Cezanne, their air, which has supported so much of modernism, is now in their original sense, a luxurious joke. Their open structure is being cancelled out, and in its, place, in the rejection of the entire idea and perpetuation of modernism, is the altered structure. The closed structure, an obsessive structure. An obsessive closed structure where discovery, comedy and war can take place. A structure that is truer; art frames, or enclosing casements are vital. They physically build the scene of the painting. They close the painting, separating it from the other, provide the painting with its first line of attack and defence. The frame then, and the face take on similar functions, as in the front line. Comedy alone is suitable for us today, for tragedy presupposes guilt, moderation, a sense of responsibility, none of which exist in our war. We are in a situation now, in which things happen without anyone in particular being responsible for them and everyone gets caught up in the sweep of the events. We have truly reached a point where we are ridding ourselves of the deviation that has existed since enlightenment. Artifice is substituted for art, strategy for re-creation.

Modernism with its sexless stance can hardly begin to comprehend the tensions implicit in our present existence in war, or compete with the concerns of the art of subject matter.

The drawings, the paintings, through the face the eyes twist and tighten to form balls, with the nose lifted and long or short flees or sinks into a penis that does not sit well. The mouth sometimes overflowing with teeth or eyes takes the deep vagina to the front. The battle is fought with sweeping force. In the androgyny of these faces, and the clues supplied; there is present the notion of a group, a society, that may understand these clues: The Brotherhood.

There is a dive into subject matter and a drive for another aesthetic. This reinterpreted aesthetic can be found in the face. Not the 'face' as in, expression, but rather the face or facade. A skin, a fore-skin, protection from the stings of associations and attempted cancellations. It is aIso a facade that launches its own attack stings in an attempt to define itself its selfhood. It is this facade, face, front line, that is the subject matter that can provide the obsession which will lead to the 'discovery'. This face front is not simple terrain, for the state is psychological. Not only is the facade an armoured defence against others, it also can, become independent for that which it originated (for the weapons and defence system in our war, see also, no guilt or responsibility, even to us). (The weapons are swept along just like us). When this occurs it seems that the maze is created. It is just such a state, when the facade is not only defending and attacking in its original function, but has created its own self defence and attack, all is in danger. Part of the closed psychological structure involves the comprehension in the portrait of multiple superimposed truths. And so, multiple paths in this maze. Paths that lead to spaces, spaces that are truths. Spaces in a closed structure, a closed structure surrounded by cancelled truths: The structure must be closed. For there is the horror vacui.

A one-dimensional psychological self portrait in many portraits, many meanings. In this strife, holes become important. The facade is holed. These are the domination entry points for others and for your self, and for the defence, and for the obsession.

In this strife, it is all about getting a hole or another before the obsession and the defence. Reading the monk's pornography.