One Hundred and One Insect Life Stories 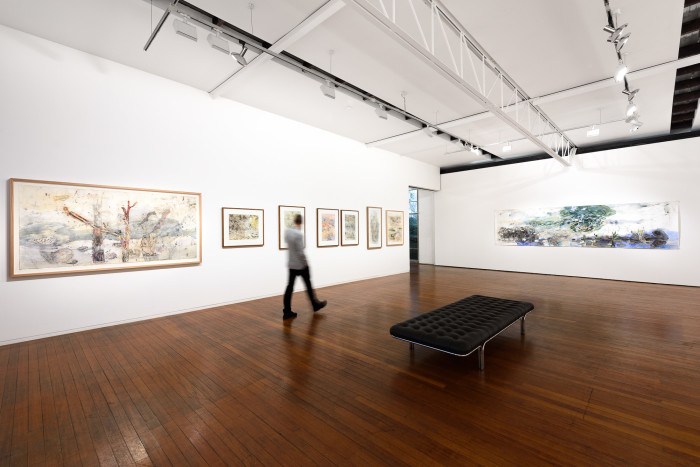 A Foray Into The Worlds of Animals and Humans

Since 2009, I have been making work about the great floodplains of East Arnhem Land. In December 2017, my collaboration with the great Yolngu artist Mulkun Wirrpanda was shown at the National Museum of Australia. The exhibition, Midawarr/Harvest - The Art of Mulkun Wirrpanda and John Wolseley is a huge installation of work celebrating the edible plants of the region. The show is currently touring and will be on display from April 5 at the Melbourne Museum. One Hundred and One Insect Life Stories at Roslyn Oxley9 Gallery includes work from this series but also charts my more recent fascination with the insect and mollusc life of East Arnhem Land and the invertebrates which I encounter around my home in the Victorian Mallee.

In 2009, when Mulkun Wirrpanda adopted me as her ‘wawa’ or brother she gave me the name Langurrk, a kind of beetle grub which burrows in mud. I am still not sure why she gave me this name or why it is ever since I have been utterly obsessed with beetles and molluscs. Over the years I have studied their life stories and their complex tunneling systems laid out like strange maps under the bark of trees.

I have been interested in the ways in which we can enter into the wavelengths of plants and creatures ever since I came across Jacob von Uexkull, the early behaviourist who in his book Forays into the Life World of Creatures described how in order to understand nature one had to do a kind of shapeshifting and somehow enter into the umwelt or ‘life world’ of non-human creatures.

Looking at these ‘life worlds’ of insects as revealed under the bark, I have developed a number of ways of documenting them. In particular, I have rested sheets of Japanese paper on them, and made rubbings or frottages - in just the same way as Max Ernst did on the scrubbed boards of his seaside hotel. Often as I gently rub the engraved surface of a piece of wood with graphite, the whole life story of a particular insect comes mysteriously into being. I can trace how tiny eggs hatch into grubs, and then eat their way over many months through the wood, miraculously turn into pupae, and finally transform themselves into gorgeous moths or fearsome stag beetles. I have found these journeys of metamorphosis are the foundation of many symbolic stories and powerful myths which appear again and again in art and religion. From the sacred scarabs of Egypt to the moths as souls flying out of Greek funerary vases these insect transformations are one of what Mircea Eliade called the great Myths of Eternal Return.

I like to think that in the works in this exhibition there may be found some of the missionary zeal which characterised those first surrealists back in the 1920s. When Andre Breton launched his famous surrealist manifesto in 1924, he proclaimed the virtues of ‘pure psychic automatism’ and I would like to think that these works share some of his concerns. Paintings made with the assistance of beetles and incorporating their particular insect marks and lines. Engraved lines made with no thought to the aesthetic or artistic goals of the human species. You will remember that with that marvelous mouthful of a phrase Breton was spruiking the idea that one could have revelations and make art as he put it ‘in the absence of all control exercised by reason and outside all moral or aesthetic concerns.’

Breton and especially Max Ernst borrowed many of their ideas from Sigmund Freud who used free association and automatic drawing or writing to help his patients explore their unconscious minds. The surrealists did their own kind of automatic writing, collage and masses of frotting.

The word ‘frottage’ comes from the old French ‘frotter’ - to rub. I first came across it in the west of England where a frotterer was someone who was very good at stroking and calming animals and birds. Robert Redford in the film The Horse Whisperer was a skilled frotterer.

So when I am frottaging the engravings of beetles or the woodblocks cut out of ancient trees, I am not trying to consciously control the process. I’m allowing the maps of the life cycle of unknown beetles to float onto the paper. Sometimes I think that there is some kind of automatic writing going on, and that this calligraphy is not coming from my subconscious but from the beetle. I am being written by a beetle.

This brings me to the idea that there is another kind of revealing that can happen with this type of frottage, which was also embraced by those first surrealists. This is the idea that by connecting with the hidden depths of the unconscious psyche the maker of frottages can reach down to the hidden stratas of the deep time of the earth itself. Now this is a very big claim for an artist to make! Those old surrealists did make these kinds of ambitious claims, but how can an old artist in 2019 at a time when there is a general distrust of overarching narratives be showing this degree of hubris?

Well, I don’t think I can answer this question today in these catalogue notes… I can only hope that the paintings in this exhibition do at least give a hint of some kind of epiphany. The kind of moment of realization which happens when I frottage trunks of trees engraved by beetles or sections from 3000 year old Huon pine trees. In several of the works in this exhibition I have collaged woodcuts I have made from these incredibly old Huon pine trees. You can imagine how when rubbing those tree rings of deep time, a concentric ring for each year, there can be a moment of sartori – a leap back into prehistory. My process is to rub the surface of the paper with lovely large lumps of graphite. As the image emerges on the paper, I am actually coaxing into being the grain of the wood with its tree rings; fat ones in the years of heavy rains, thin ones in the drought years. With a rhythmic action, I am moving through the cycles of the seasons and the passing of time.

And similarly with the beetle-engraved tracery in works such as Insect calligraphies, the life cycle of one beetle emerges on the paper as I re-enact a process which has been going on for millions of years. In a work such as The hidden territories of the mangrove worm mollusc – Arafura Sea, 2019, I have ‘frotted’ the engravings made by shipworms on the stems of mangrove trees, and on the timbers of wrecked ships. Then I have collaged these prints onto a larger painting and then added drawings of the flow of the myriad lifeforms  - seaweed, fish, marbled eels and molluscs, which surge through the mangroves as the tide comes in each day.

I have used the same kind of collage process in the painting, The Life of Inland Waters – Durabudboi River (2018). I have drawn the web of fish and aquatic plants and currents of water inland at the headwaters of the floodplain. The way the plants, sometimes in serried lines or groups or undulating mats, are woven into the currents of water reminded me of flocks of different birds in a stormy sky. Some are moored to the bed of the stream while others such as the carnivorous bladderworts swim about freely waving their bladder-like traps in the current. The serpentine stems of various water lilies flow out and then contract when the water recedes in the dry season.

There is another technique or process that I have stolen from the surrealists. A kind of nature printing which was first employed by 15th century illustrators of herbals. They inked up the actual leaves and flowers and then either made rubbings from them, or printed them with a press. Max Ernst did this as well as Joseph Beuys.

You see it often in Ernst’s most typical paintings – those richly textured mossy paintings like his Europe after the Rain II (1941). In my large painting, Clerodendrum in the monsoon rain (2018), I too inked whole swags of foliage complete with blossoms and a large number of insects. Later, I discovered that Sydney Parkinson had drawn this tree beside this very same floodplain 250 years ago when he had passed by with Joseph Banks. Banks and Solander gave it the Latin botanical name Volkameria Insectorum because of the huge numbers of insects which were feasting on it.

At one end of the gallery space is a kind of Cabinet of Wonders designed and made by Linda Fredheim, Hobart. This Beetlearium includes drawers with beetle-engraved branches and the prints from them which can be slid out for inspection or hung on the wall behind. I like to think that this cabinet represents the heart of the whole exhibition.

In the top section is an insectarium appointed with all the luxuries a beetle would need while making the art which is hanging round the gallery walls. According to the season it is here that Rhinoceros and other beetles live out their lives and where their grubs eat their way under the bark or within the wood of the branches inside the cabinet. It is here that they engrave their life cycles. You could say that they are like artists living in the gallery.

In the middle of the installation there is a sculpture incorporating  a French Champagne ‘riddler’ – once used in the process of making Veuve Clicquot champagne. In the place of the wine bottles there are inserted some 50 of the various beetle-engraved branches and logs used in the making of the show. These branches will be used as part of the Happening on April 6 when participants will be invited to enter the umwelt - the ‘life world’ of insects  - to find their inner beetle.

John Wolseley (b. 1938) has been creatively exploring Australia’s flora, fauna and complex environmental systems for over 30 years. He views himself as both an artist and a naturalist. In 2005, he was made an Honorary Doctor of Science by Macquarie University and was also awarded the Visual Art Emeritus Award by the Australia Council. Wolseley recently collaborated with his close friend and Yolnu elder Mulkun Wirrpanda to create a major exhibition and accompanying publication Midwarr | Harvest: The Art of Mulkun Wirrpanda and John Wolseley.The touring exhibition will open at its third location at the Melbourne Museum on 4 April 2019.

The artwork of John Wolseley is included in numerous public and private collections globally.

John Wolseley has been exhibiting with Roslyn Oxley9 Gallery since 2001. This is John Wolseley’s 7th exhibition with the gallery.