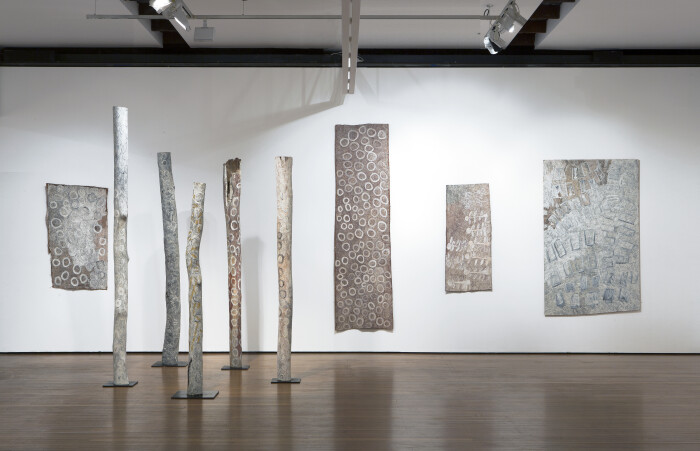 “These are Gan’yu (stars). They are the stars that belong to us, the Yirritja people... stars. They are moving across the sky and we are watching them. These stars for us, the Mangatharra (Yirritja moieties). We sing these stars and we cry them. We cry.

Look! There stand the stars. What should we do? Shall we cry?“

Roslyn Oxley9 Gallery is pleased to present the eighth solo exhibition with Nyapanyapa Yunupingu. This major exhibition features her latest abstract and figurative works across a variety of mediums. Yunupingu stands out as one of the most celebrated Aboriginal artists with her extraordinary gift of storytelling.

Nyapanyapa is the daughter of Mungarrawuy Yunupingu whose two sons Galarrwuy and Mandawuy have pursued the struggle for land rights that their father spearheaded until his death. ‘The Djulpan story’ is about seven sisters who went out in their canoe called Djulpan. In the dry season onwards, the sisters go hunting and always come back with different types of food: turtles, ufb01sh and freshwater snakes, and also bush foods like yams and berries. This coincides with the appearance of two related constellations, seven stars that come out together, known in English as the Pleiades. The stars will travel through the sky until the harvest season-Midawarr is over and they don’t come out until the next season.

Yunupingu’s father told her about these seven sisters in a canoe, and the three brothers who came behind them, i.e. Orion’s Belt. There are special stars in the sky which Yolngu call ‘wishing stars’. They give Yolngu bush tucker and they multiply the food in the sea – that’s why Yolngu are happy to see them. That’s what Yunupingu’s father told her. The Djulpan make it to their home over the Northern horizon and then cook their food. The smoke from their fires is sometimes visible. This may refer to visibility over millennia of extreme events in Irian Jaya such as volcanoes, dust storms and severe bushfires. Smoke or dust from such rare events is also mirrored in certain cloud formations that appear after the Sisters have left the sky. It is only then that the Yolngu of this dimension can set their customary annual cleansing fires. If fires are lit before this, the Djulpan will become sad and jealous and cry. Their tears in the form of unseasonal rain will extinguish the presumptuous fires.

Nyapanyapa’s famous late sister Gulumbu Yunupingu painted stars, which referenced the seven sisters story. Her work is a permanent fixture in the Musée du quai Branly in Paris. The major proponent of this Yolngu story in art history is Munggurrawuy Yunupingu who painted it on bark frequently. He was a legendary artist and political leader and father to many children, including the seven Yunupingu sisters who created the Seven Sisters Project of large prints in 2011. Both Nyapanyapa and Gulumbu made work in this project but sadly since that time three of the sisters including Gulumbu have died. In picking up the motif of stars in this latest exhibition, Nyapanyapa is memorialising her deceased sisters Gulumbu, Barrupu and Djawundayngu.