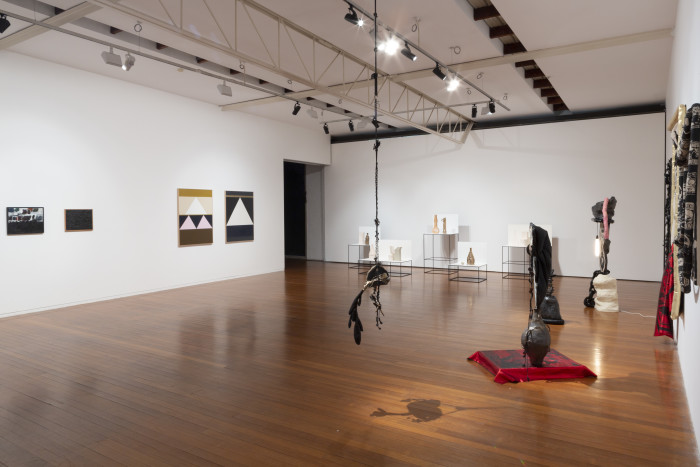 The artists in Never-Never Land take pre-existing cultural, commodity, musical and art-historical forms – such as maps, instruments, and icons from the modernist art canon – and repurpose them in their work. Engaging alternately in modes of critique, historicism and adaptation, some of these appropriations are literal, such as Dylan Martorell working with found objects; others are formal, such as Esther Stewart’s appropriation of maps; whilst some are speculative and fantastical, as with Sanné Mestrom’s approach to modernism, or Jake Walker’s personal take on architectural history.

Repurposed and recycled objects form chaotic imagery in Dylan Martorell’s sound installation, costume and collage work. The artist employs music as a meditational tool, exploring notions of natural and artificial decay, renewal and reuse. Martorell has exhibited and performed nationally and internationally in commercial, artist-run and institutional spaces. He was recently included in the Kochi Muziris Biennale, India, 2012-13 and the Jakarta Biennale, Indonesia, 2011.

Sanné Mestrom deploys emblems of modernist art and design to inform her material-driven practice. Translating found objects and imagery through acts of replication and disruption, she investigates notions of lineage, originality and influence through feminised inversions of modernist art historical tropes. Mestrom was born in The Netherlands and moved to New Zealand as a child, relocating to Melbourne as an adult. She has exhibited in Australia and overseas, recent highlights including NEW13, Australian Centre for Contemporary Art, 2013; Utopian Slumps at Art Basel Hong Kong, 2013 and Future Primitive, Heide Museum of Modern Art, 2013-14. Mestrom was winner of the John Fries Memorial Prize, Sydney, in 2011.

Esther Stewart’s hardedge abstraction plays with shape and colour to produce optical effects and tonal clashes. Her paintings mimic the lines of architecture and echo the visual language of plans and maps. Stewart has exhibited in artist-run and commercial spaces and has contributed to numerous public art projects throughout Australia. She recently co-curated the Das Boot Fair as part of the 2014 Next Wave Festival.

Artistic genres and traditional symbols are reshaped, hybridised and reimagined to suit Jake Walker’s conceptual designs. His multi-dimensional paintings are often worked and re-worked over a period of years, referencing modernist architecture and art history. Walker was born in Wellington, New Zealand, where he currently lives and works. Recent exhibitions include Jake Walker, Utopian Slumps at Art Basel Hong Kong, 2014; The Town Belt, Wellington City Gallery, 2014 and Melbourne Now, National Gallery of Victoria, 2013-14. He was winner of the inaugural Arkley Award in 2010 and his work is held in the Artbank, Chartwell and Joyce Nissan collections.

Sarah Contos’ work draws on her interest in Australian car culture and historical images of women presented as objects, turning it inside out by adding sensual, feminine and fetishist elements to elevate the ‘smutty’ into something revered. Ancient Greek statues and attica vessels are incorporated with elements from other cultures and time periods to collapse individual histories or geographical locations to form new mythologies. Contos recently exhibited in Future Primitive (curated by Linda Michael) at Heide Museum of Modern Art. In 2013 she was awarded the 4A Beijing Residency Program and in 2011 was the recipient of the Martin Bequest Travelling Scholarship.