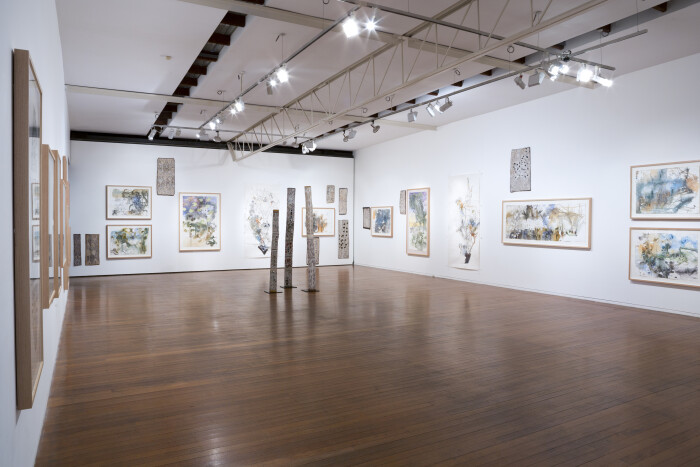 This is an exhibition about one of the most wild and powerful landscapes in the world – the monsoon rain forests and floodplains of East Arnhem Land  – as seen through the different lenses of two of Australia’s most distinguished senior artists.  Large watercolours, woodcuts, bark paintings and larrakitj image the essential nature and dynamic energy of a range of endemic tropical plants with their yams, edible tubers, and fruits. The works surround the visitor to the exhibition – Wirrpanda’s images of particular plants juxtaposed with Wolseley’s drawings and paintings of the same species.  For example, her bark showing one of the region’s huge yams, manmuna in the Yolnu language, has luxuriant heart shaped leaves which almost morph into the tumbling foliage of Wolseley’s nature print of the same plant beneath it.  Likewise a painting on bark of an ancient cycad with its exuberant fruits suggests a line of connection across the gallery to a drawing by Wolseley of another cycad species reflected in the still dark water of a forest pool.

When the artists first met, Wirrpanda had already started to paint an epic series of bark paintings and larrakitj about the plants of her homeland: a small section of which is included in this exhibition.  This is a powerful group of paintings which demonstrates her urgent and passionate desire to pass on to new generations her vast knowledge before it is lost.

Mulkun Wirrpanda is a senior female artist for the Dhudi-Djapu clan from Dhuruputjpi.  She is an acknowledged leader of her clan and has a lifetime’s knowledge of her country. This vast knowledge is distilled into her works.  One of many lasting legacies of her recent body of works dealing with food plants is that this information will be preserved for the future generations.  It is particularly important for those plants that are no longer collected or valued in the way they had been in the past.  For example the works depicting wild orange or bunjunu which was an important food in her youth.  She has often spoken in a heartfelt way about how this is one of the main purposes of her art.

John Wolseley has lived and worked all over the continent and is known for his large scale works on paper which relate the minutiae of plant, bird and insect to the greater movements of the earth’s geological and ecological systems. Wolseley and Wirrpanda first met in 2009 when John was in Baniyala as one of a group of Yolnu and balanda and visiting artists working on the wonderful project and touring exhibition Djalkiri – We are standing on the their names  – organised by Nomad Art of Darwin.

As part of this project, the artists, scientists and anthropologists were hosted by Djambawa Marawili.  They drew and worked on their etchings and lithographs around Blue Mud Bay and later in the Buku-Larrnggay Mulka Centre in Yirrkala.  After a day spent harvesting tubers and yams, Wirrpanda asked Wolseley to be her wawa or brother and gave him the name of Langgurrk; a type of beetle grub which lives in mud and yams.  Since then they have met each year in the Midawarr season, wandering through rainforest and floodplain, collecting and painting the rich diversity of yam, tuber and fruit.

The artists have also collaborated in a series of woodcuts on Huon pine, The Midawarr – Harvest Series.  Seven large prints by Wirrpanda and four by Wolseley celebrate the same edible plants.

For this series Wolseley took huge slabs or blocks of Huon Pine from Tasmania to Yirrkala where Wirrpanda and Wolseley then engraved their woodcuts into these rough wood blocks.  They were then proofed and printed by Annie Studd and the Yolnu printmakers at the Buku-Larrnggay Mulka Centre Print Workshop and by John Wolseley at his studio in Victoria with the help of printmakers Kaitlyn Gibson and Cassandra Gill.

Two of Mulkun’s prints Rakay # 2 and  #3 are printed on stringybark made by Winsome Jobling, the Darwin based paper artist.  Something extraordinary happens when the work is printed on paper made from the actual place rather than imported European papers from France or Italy.

During this time Wolseley also took on the viewpoint of the Langgurrk, in a number of prints made directly from ‘life histories’ engraved by beetles under the bark of trees. The Boring Beetle and Moth Compendium 2015 is a group of relief prints showing the progression of changes undergone by a beetle during its lifetime. In a fallen branch randomly chosen from the forest floor, he has found a whole world in miniature form. An epic story of birth and transformation which brings to mind the connection that the ancient Egyptians saw between the scarab beetles rolling a ball of dung across the ground and the way the sun rolls across the sky and is reborn each dawn.

Though coming from very different directions, there are correspondences and synchronies between the works of these two artists. In a curious way, aspects of the scientific foundation of the European tradition correspond to elements in Wirrpanda’s Yolnu approach.  Her depiction of plants and their habitats reveal her huge knowledge of seasonal changes, morphologies and types of energy. Howard Morphy has recognized the complexity of this knowledge system; pointing to the Yolnu ’belief that the surface forms of things derive from underlying structures and relationships’.  In several of his works Wolseley refers to earlier artists and scientists and he sometimes says that he likes to play along the boundary between art and science.  In The Power of Movement in Plants – Discorides’ Yam Climbing Leonardo’s tree Wolseley references what could be described as one of the great originary drawings from the dawn of science – the tree Leonardo da Vinci drew when thinking about the growth of trees, branches, river systems, and vascular systems.  In the companion work The Power of Movement in Plants – Dioscorides’ Yam with Darwin’s Diagram, he has used one of the methods which Charles Darwin employed to document the movement of plants.  In this painting the dance of a vine as it climbs up to the sun is shown in a form of choreographic notation.

In this exhibition the same plant, be it mawuka yam or darwirr vine is viewed through the lens of two completely different world views and two completely different ways of representation.  Wirrpanda’s art flows from a culture that has evolved over thousands of years out of the country itself.  Wolseley’s art is part of the European landscape tradition based on the study of the physical and natural world through observation and experience.

An important connection between these artists is a strong belief in the originary and primary importance of the natural world – its plants, animals and eco-systems.  And a shared awareness of how our accelerating loss of connection with country will result in damage beyond repair.

John Wolseley (b. 1938) is one of Australia's most well-respected contemporary artists.  In 2005, he was made an Honorary Doctor of Science by Macquarie University and was also awarded the Visual Art Emeritus Award by the Australia Council. Wolseley recently exhibited a solo show at the National Gallery of Victoria titled Heartlands and Headwaters and his work has been selected for numerous important group exhibitions such as Dobell Australian Drawing Biennial, Art Gallery of New South Wales, Sydney (2014), International Print Exhibition, Australia and Japan, Kyoto Municipal Museum of Art, Kyoto, Japan; Fukiyama Museum of Art, Hiroshima, Japan (2014), The Skullbone Experiment, UNSW Galleries, Sydney (2014), The 18th Biennale of Sydney: all our relations, curated by Catherine de Zegher and Gerald McMaster, Sydney (2012), and Reframing Darwin: evolution and art in Australia, at The Ian Potter Museum of Art in Melbourne (2009). A major monograph, John Wolseley: Land Marks by Sasha Grishin was published in 1998 by Craftsman House, a second, expanded edition was published in 2006 and a third edition in 2015. John Wolseley's work is represented in all the major state galleries and in numerous private collections in Australia and internationally. Marrma dilakmala larruma gurra nathawu - Two Old Artists Looking for Food is John Wolseley's sixth exhibition with Roslyn Oxley9 Gallery.

Mulkun Wirrpanda is a senior female artist for the Dhudi-Djapu clan for Dhuruputjpi.  She is a daughter of the late Dhäkiyarr Wirrpanda and widow to Wakuthi Marawili, a Mau1e0farrpa clan leader who lived at Yilpara until his death in mid-2005.  She is also the mother (by kinship) to senior artist and clan leader Djambawa Marawili.  Mulkun paints
Dhudi-Djapu miny’tji (sacred design) that depicts her land at Dhuruputjpi.  As the eldest and most knowledgeable of her clan, she is acknowledged as a leader.  Mulkun is one of the few Yolu014bu women to have this status.  Mulkun was an early practitioner of works without figurative imagery within the miny’tji.  Until recently the painting of this ‘raw’ miny’tji was restricted to ceremonial use.  The work is always done using natural earth pigments (ochres).  Yalata and Darrangi are areas she usually paints, which are at her clan estate Dhuruputjpi, where she resides.  Mulkun paints on bark, larrakitj (memorial poles) and yidaki (didjeridus) and is a talented carver, weaver and print-maker.  Her works has been exhibited throughout Australia and Asia.