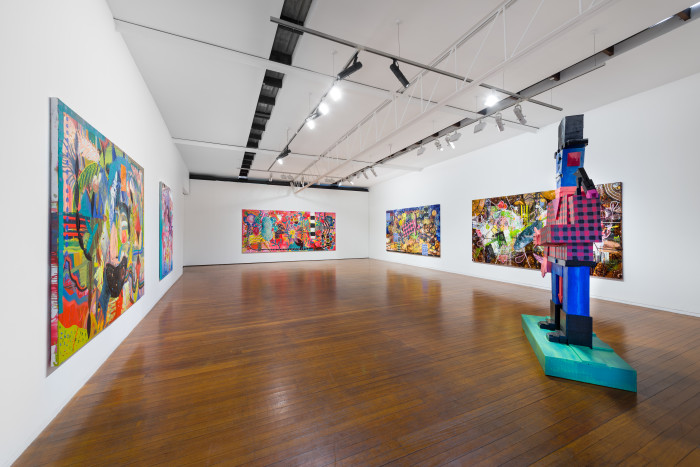 Mankini Island is a fictional place that I have invented. For argument’s sake, let’s imagine that Mankini Island is real. What would it look like? Who would live there? And most importantly, is it possible to survive on this island? My paintings need to be decoded to answer all these questions. Almost all of the needed information can be discovered in the titles of my paintings. The titles lead us down a path into a mythological realm, a botanical world laden with iconic characters. Although it could just be a hallucinogenic vision brought on by one of Arthur Karl Heffter ’s personal experiments with psychedelic substances such as peyote.

If Mankini Island were just a vision, how would we be travelling around this Gethsemane? Would it be on foot or would we have a deity guiding us around the olive groves? I envisage us to be riding around on an Epona, leading our souls inwards. Waiting for an Entheogen to establish itself and show us a type of truth, transcendence. But then again, there is an Arrojadoa theunisseniana cactus whose only meaning could be one of beauty. This Arrojadoa theunisseniana may as well be here to bring us back to our current reality. Meaning a reality in the present to be in this situation to view paintings by using our individual experiences in life. Maybe a visceral emotional response to the paintings themselves is all I’m asking the viewers to have, to bring out our own Chimera. This would only however allow us to acknowledge a type of ‘bad faith’ within us.

We crave to find meaning in our lives and in art. We look up into the night sky and dream, just like Giovanni Domenico Cassini did. Astronomy brings us back to a location, it seems amongst all the nonsensical codes I had given, I am not using Mankini Island as a metaphor for any metaphysical enlightenment. Perhaps I’m simply saying that Mankini Island is Australia, may it rest in peace.