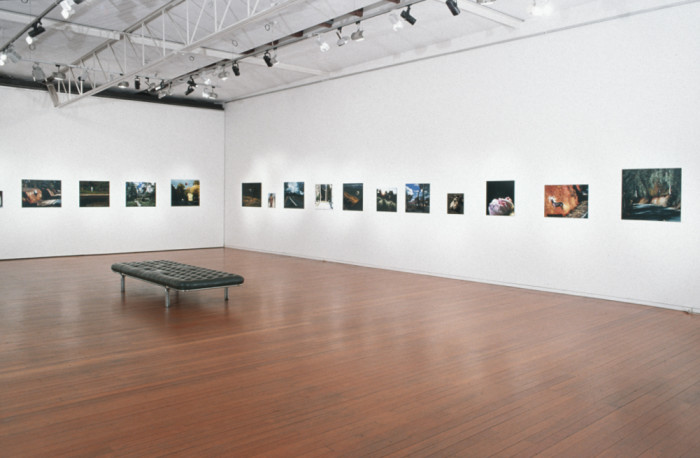 For her first solo exhibition with Roslyn Oxley9 Gallery, Louise Hearman has filled both exhibition spaces with a group of new oil paintings and pastel drawings.

Hearman's is a visionary art. Her openness of perception permits entry into the visible world of not-quite-nameable or indefinite apparitions. She reveals spectral phenomena via the medium of paint as they appear within the ordinary suburban and familiar rural landscape. Floating heads, hovering spheres, ominous planets forecasting future events and other meteorological disturbances. Portraits of animals and children appear frequently in the exhibition. These innocents exist beyond the reaches of repressive control and represent the unpredictable nature of Hearman's world.

Form in Hearman's paintings is strangely irradiated. She fixes her subjects with intense white light -- often brighter than the sun -- before richly glazed shadows. This applies to her images of the ordinary as much as the extraordinary, where otherwise unremarkable scenes are charged with metaphysical light and awe.

Louise Hearman has been exhibiting her paintings for over fifteen years. In recent years, her work appeared in a number of significant survey exhibitions of contemporary Australian art including, Fieldwork: Australian Art 1968--2002, National Gallery of Victoria at Federation Square in 2002, and Uncommon World - Aspects of Contemporary Australian Art at the National Gallery of Australia in 2000. She was selected for Through A Glass Darkly at the Art Gallery of New South Wales in 1995 and the Australian Perspecta in 1993. In 1999, she was short-listed for the prestigious Contempora 5 art prize. Hearman's works are held by most major public collections in Australia and numerous private collections both in Australia and overseas.