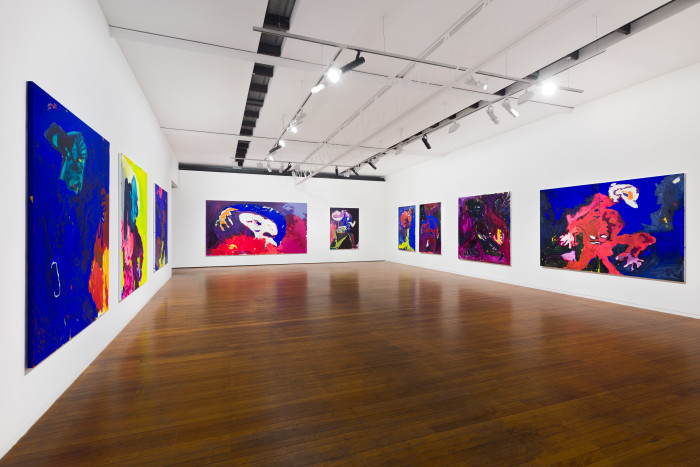 Linger. linger. A word that implies by its very definition, an elongation of time; of waiting; of staying; of existing in a space of contemplation. Yet a word we don’t necessarily feel comfortable spending a lot of time with. The act of lingering from moment to moment or between two moments enables the opening and expansion of space, a home for betweenness. The natural inclination to want answers, to define, to move quickly towards exactitude is relinquished during times of lingering. It is within this space of uncertainty, of uncomfortable tension that we reside in Tom Polo’s exhibition of new paintings, linger, at Roslyn Oxley9 Gallery.

In Polo’s new body of work, figures are submerged within a surface of swirling layers of paint, varied brushstrokes and painting techniques that create a complex surface plane where foreground and background appear to merge, melting from one state into the next. Lingering on a threshold of presence and absence, what is painted in and what is painted out, Polo’s figures, — looming characters — are both revealed and concealed creating a surface tension that draws attention to the spaces in-between.

The viewer's position, synonymous with the painting’s figures as both the looker and the observed, reveals a performative spectatorship. As if waiting in the wings to go on stage, the figures/viewers are simultaneously departing and arriving, embodying a place in which to reside longer than necessary but perhaps uncertain where that place may be.

Cue The Cranberries 1993 hit Linger: ‘if you could return… And I’m in so deep… you have me wrapped around your finger’, ‘do you have to let it linger?’ Yearning for a relief from being left to wallow in limbo; the desire to find an answer through returning somewhere but perhaps not finding the way there - the song’s message also seeps through Polo’s paintings in linger. Like swirling rivers of colour, dragging the figures/viewers down into its depth then spitting them back out to the surface, to hover like colourful blobs, absorbed and immersed below the surface yet able to float above, they find a position that is ultimately undefined and seemingly reckless.

On first glance Polo’s painting are glorious emulsions of colour. Vibrant, luxurious surfaces that ooze gorgeous colour combinations, and richly textured layers. Peppered with witty quips and delightful characters, the viewer is invited in to play. As one commits to their role in this theatrical deluge, dismembered limbs and supersized heads - caricatures that jeer and laugh bounce out of the background, to become an entry point for the absurd and ridiculous to take shape.

As we spend time with the paintings, we delve further into canvases full of contradictions – the gorgeous palettes clash with murkier tones that swim underneath - a muddy green with high-lights of orange accents a deep purple and stunning violet. Sickly lime green spills out of the vivacious Prussian blue and into the precarious neck of a giant, bobbing red head. ‘Do you have to let it linger?’ on repeat as one floats, like the nodding head, around the space.

We desire to get close to Polo’s paintings, to connect, to be part of his theatre but an uncertain tension questions our position within this stage set. ­­­­­­Are we voyeur to Polo’s cacophony of characters, the odd balls and the misfits? Lingering a little too long, seeking intimacy like The Cranberries’ protagonist, or, are we pawns in Polo’s perpetual in-joke - observing, waiting to be told what to do?

Intimate moments entice us to continue: the nod of a head, the twist of a torso, the wave of a giant hand - delightful articulations for which we hit pause. Definitive little marks of paint hint at who the characters are, accenting their personalities, providing moments of clarity for a time only to dissipate into the watery soak-stained backgrounds

Polo’s position in this dance is somewhere in the middle. The presence of the puppeteer yet like the viewer an active embodiment of the works, acting in the space between audience and art. There is certainly a sense of bodies within this space. A corporeality which invites participation and allows us to sink into its depth.

In linger Polo’s approach has become looser, muddier and murkier, sinking deeper into his practice and into the complex psychological relationship with his characters and his relationship to the viewer. This multifaceted association of the psyche and the individual, the artist and the subject plays out within Polo's sense of sophisticated theatrics where we are ultimately seduced into a spectacularly fantastical world.

Softly painted out in the work watch and witness are the words ‘ancora ancora’ reminding us of the concept of time in Italian - to be ‘still still’. Ultimately steeped in Polo’s practice of observation, the engaged outsider becomes the insider as the artist inserts himself directly into the show as a clock. In an eight-hour video installation, clockwatch (linger), set to gallery hours, the artist surveys and watches whilst also performing, and at times absorbing completely into the blue wall, his final disappearing act. It is in these clever moments of lingering time, of stillness, that the roar and fervour of this exhibition makes sense.

Your paintings were stacked and leaning against the walls. One was lying face up on the ground, unfinished. They were large, and although I’d seen a few photos that you’d taken on your phone, the intensity of the colours — saturated blue, plumb purple, coral pink, acid yellow, lime green, sherbet orange — surprised me. Smartphone cameras do a strange thing to colour. The assumptions contained in the algorithms (computational imaging) flatten and correct it, remove the noise and depth. In doing so, colours remain closed, tidy. The eye passes coldly over them and isn’t drawn in. This is one way to explain my surprise, but it’s also a cause for considering the work of colour in these paintings, and now, as I write, how I’m remembering them.

Seeing your paintings in the studio made me search through an old pdf where I’d once read an unusual thought: colour is spiritual, and attains its highest appreciation in children, for whom it isn’t superimposed onto objects like it is for adults but is “constituted by an order consisting of an infinite range of nuances.” An infinite range of nuances! The phrase suggests that colour is a restless, living thing (making it dangerous to a particular type of adult sensibility that plays it safe in the realm of ‘good taste’). Rather than cloaking objects, for children it is the object. Colour, so this thought goes, is “a winged creature that flits from one form to the next.”1

I wonder if this is why, when a child draws or paints, the choice of which colour to use is a serious decision? Each colour is chosen based on a changing, ineffable idea, which often has less to do with matching it to the object being illustrated than it does with motion and energy. Colour gives flight to the imagination and with it goes the hand, around and around and off the page. What to make of this thought that colour is inseparable from movement, flitting from one form to the next, and has a life of its own? For colour, in its histories of difficult procurement, labour, application and symbolism, connects the eye in the act of looking not only to the spiritual but also the mineral, and sometimes the vegetable, too. After all, from deep in the earth came materials that made it possible to create a sky.

Here I think of Giotto’s use of azurite blue in the Arena Chapel in Padua, Italy, finished around 1305. He (and his assistants) consistently used blue to connect the different scenes, so that the thirty-eight framed stories can be read across three levels, like a cartoon strip. The blue is put to work everywhere, most notably the ceiling, on top of which he’s painted golden stars and medallions – or are they portholes? – showing Christ, Mary and others looking down. Giotto’s decisive use of blue replaces the blingy gold background in Byzantine icon painting, and the colour acts as both the sky and the heavens, earthly time and the infinite. Did Giotto intend our eyes to move from the earthly to the transcendent, or to see one in the other?

When I was visiting your studio that day you pointed to a painting and said, “I had to paint that blue.” It was as though a cartoon sky had fallen into the pictorial space. This same blue runs through many of your paintings, unifying them, but unlike Giotto’s background-foreground illusionism, it washes over and through your figures. In your recent paintings the figures are overwhelmed – if that’s the right word? – by colour. The pictorial space either threatens to envelop them, or they seem to leak out into it, as though the paint is still wet or it’s the aftermath of a flood, everything wrecked and polluted by a storm. In some paintings the colours accumulate on top of each other so that the layers remain intact and the figure (only just) holds its ground, but in others they lose the battle, and are subsumed.

In the Arena Chapel, on the wall where The Last Judgement is painted, just above where the bankers hang from the strings of their own money purses, I recently noticed two small angels at the very top who, when zooming in, appear to be rolling up the sky and the heavens, as if the show is coming to a close. On these two angels I read (and agree) that Giotto isn’t “undoing his fiction to reveal blankness” but inviting us “to an imagined glimpse of the world beyond time.” Here the artist might be expressing what was said in the Book of Revelation: “And I saw a new heaven and a new earth: for the first heaven and the first earth were passed away; and there was no more sea...”2 Giotto, with wild confidence, shows us a glimpse of the world beyond sky, heaven, painting and time.

I don’t remember seeing any angels revealing a world beyond time when I looked at your work that day, instead I’d say there was a deluge of earthly time, or do I mean colour? A sea of colour that floods the senses and leaves the eye with no choice but to sink or swim. Like the figures in the paintings, the eye is plunged into colour. A bit like being in a nightclub – why not? – a flash of faces, of strangers and friends, surfacing and receding, distorted and curious in the changing light. An infinite range of nuances as the eye moves across and in and through the colours. Not a new earth or time beyond the paintings, but the overwhelming and surprising earth and time that we already have, are already in. But that’s a thought for another visit.