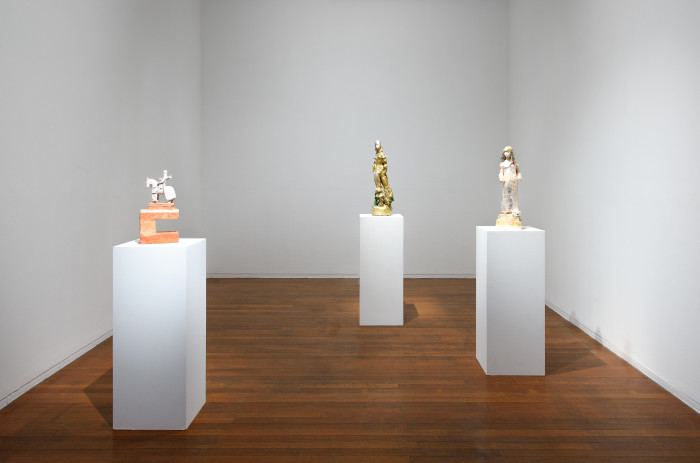 "With materials and handling, Marrinon’s choices are as discriminating as her decisions about scale. The delicate, friable character of chalky plaster and dry terracotta immediately suggest great fragility, and reinforces the sense of protectiveness established through scale. One walks around her figures on their small plinths, sees each fold in the drapery, each mark made by the artist’s hand, every rough edge in the plaster and the various combinations and permutations of these."

During the 1980s Linda Marrinon embraced postmodernist theories to do with irony and mass culture by quirkily combining high and low art. She continues to playfully parody and pastiche the traditional canon of Western art history. She is a master of ambiguity. Her sculptures are at once an archetype and an intimate portrait – the specific employed in pursuit of the general. Marrinon’s works are often a meditation on character and the human condition; an invitation for introspection. Armed with technical brilliance, Marrinon is free to indulge in idiosyncratic proportions and the pleasures of the handmade.

Linda Marrinon has been exhibiting since the early 1980s and has been the subject of major survey shows at The Ian Potter Museum of Art, The University of Melbourne and The Institute of Modern Art, Brisbane. This will be her first exhibition following her receipt of the 2018 Don Macfarlane Prize, and the announcement of her inclusion in The National
2019.

In 2001, Marrinon was a recipient of the prestigious Samstag Fellowship which permitted her to study at the New York Academy of Art. Last year in 2018 she was awarded the Don Macfarlane Prize  by the Macfarline Foundation.

Marrinon’s paintings and sculptures are held by most of the major Australian state galleries and numerous private and corporate collections.