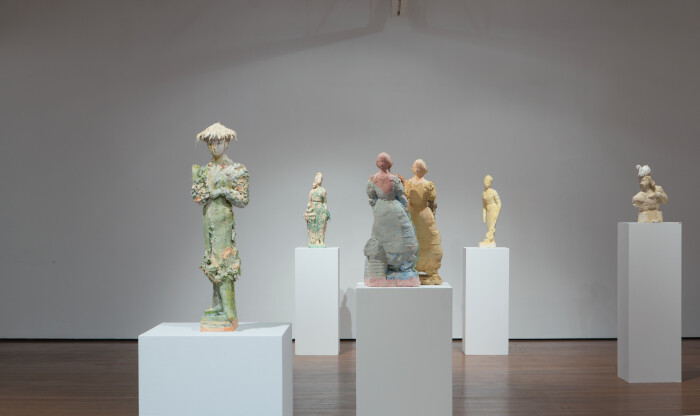 Roslyn Oxley9 Gallery is proud to present an exhibition of new sculptures by Linda Marrinon. The self-titled exhibition displays portrait busts, statuettes and in a first for Marrinon, a series of animal sculptures.

Marrinon builds her characters from other worlds, stealing protagonists from Greek and Roman mythology, classic fiction and art history - drawing inspiration from a variety of time periods and narratives. Working in plaster, terracotta and bronze, her pieces call to mind a sketch, a quick free hand drawing and this is precisely what lends them a contemporary voice. As a viewer you sense both the symbolism and allegory.

There is something painterly in this collection of statuettes, a hybridisation between disciplines. Her subjects could be plucked from a major museum but in her hands she conjures a contemporary take on humanity. There is evidence of abstract expressionism in Marrinon’s handling that suggests her past as a painter.

Perhaps the most satisfying aspect of Marrinon’s work is her ability to capture a profound depth in her subjects with the most humble of materials, clay. This sensitivity within her subjects and the apparent ease of construction reveals her technical brilliance. Surpassing all these technical aspects however, is the authorial gesture, the spare hand of the artist that brings the poetry to these constructions.