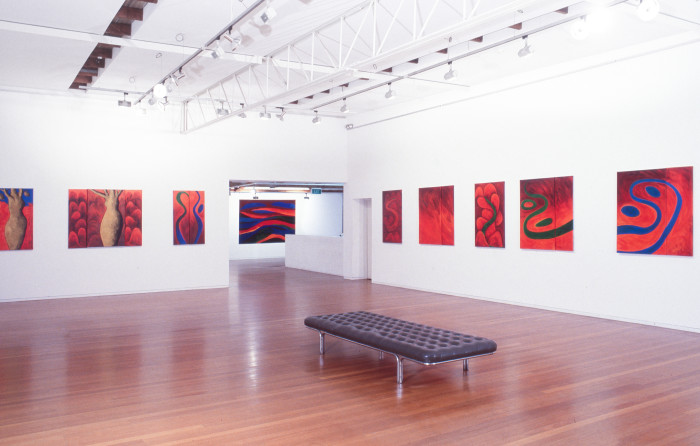 After so many years of hardship, my robe is in tatters and half of it is now blown away with the wind. (Zen Saying)

The work of Linda Jackson is unique in Australian art and design. Once described as "the free spirit of Australian fashion" Jackson has extended her vision to incorporate painting, a form that was always there in her clothing. "I didn't even want to cut them into clothes so I devised really simple construction techniques leaving the artwork as intact as possible".

Linda Jackson's designs incorporate a vast array of inspirations and influences. The vibrant colours of the Australian bush, opals and rainbows, the traditional dress of Asia and Africa all found expression in Jackson's patterns, shapes and colours. Jackson has travelled widely, including living and working throughout Papua New Guinea, Asia and Europe. In 1973 Jenny Kee opened Flamingo Park and filled it with Jackson's clothes, beginning a renowned partnership that lasted for ten years and pioneered "Art Clothing" in this country. Other collaborators included David McDiarmid, Peter Tully and Deborah Laser. Her designs have been shown in and are held in the collections of galleries and museums all over Australia, including the National Gallery of Australia, the National Gallery of Victoria and the Powerhouse Museum. Internationally, Jackson has shown in Dallas, London, Korea, Tokyo and Edinburgh.

Since the early 1980s, Jackson has regularly visited the Northern Territory. The colours of the landscape have been a recurring influence, and Jackson has expressed this in usual and inventive ways, printing with metallic and fluorescent colours, and using paper stencils and gum leaves. Her love of Central Australia led to Jackson basing herself in the Northern Territory since 1994, working as an educator with a number of Aboriginal artists and their communities, including Bima on Bathurst Island and Injalak in Arnhem Land. "I had the strong desire for a wandering life, giving myself up to the beauty of nature and the unknown, and to fulfil the dream to spend more time in Aboriginal communities," Jackson Says.

During 1996 Jackson lived in Broome on an Australia Council Fellowship, concentrating on painting and rug design. This resulted in a body of work entitled Perl Coast paintings and Indigo textiles, incorporating African and Japanese methods of dyeing and patterning cloth. In 1997 Jackson returned to Alice Springs, where she continued to focus on her painting. She also spent time working on a textile project with the women from Keringke Arts at Santa Teresa Community. The work in the exhibition charts a journey, with Jackson's symbols and images evolving into simpler and more essential expanses of colour and shape. This current show is the culmination of two years' work, including paintings, rugs, and chiffon fabrics or "ethereal landscapes".