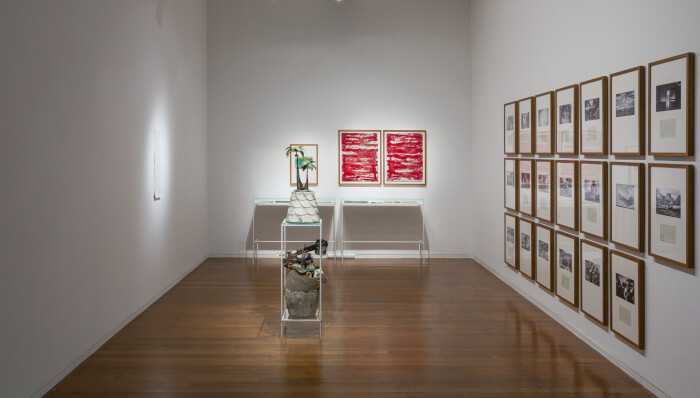 Newell Harry’s new exhibition Known / Unknowns is his first solo presentation in Australia since 2012. In the intervening time, the artist has been included in several significant biennials worldwide –  All the World's Futures, the 56th Venice Biennale (2015); the Tarrawarra Biennial of Australian Art (2016); and the 3rd Montevideo Biennial, Uruguay (2016) – as well as numerous group exhibitions in Australia, New Zealand, Germany, Austria, Jamaica, the Netherlands, USA, UK and South Africa.

At the Venice Biennale, the artist showed photographic prints for the first time, framed and installed in a series of closely-hung groups (both wall-mounted and on table-height stands), alongside a series of anagrammatic Tapa-cloth banners, juxtaposed with an assemblage of found and crafted objects, often made by artists whose identity is unknown, their provenance ranging from gifts to accidental finds. These interrelated components were acquired as one installation by the Thyssen-Bornemisza Art Contemporary collection (TBA 21) in Vienna, and subsequently the artist participated in group expeditions to Papua New Guinea and French Poynesia, initiated by TBA21–Academy, described as TBA’s “exploratory soul” and a “moving platform on the oceans”.[i] This included an exploration of the centuries-old exchange tradition of the ‘Kula Ring’[ii] practiced across the Trobriand Islands in PNG’s Milne Bay Province. Several exhibition projects have resulted: Kula: A Gifting Economy (curated by Ute Meta Bauer) in Kingston, Jamaica (2016); Der Kula Ring: Aesthetic Considerations of Exchange (curated by Alfons Hug, for the Goethe Institute) in Weimar, Germany (2016); and Tidalectics (curated by Stefanie Hessler) at TBA in Vienna (until 19 November 2017).

These diverse threads can be discerned in a new installation titled Trade Delivers People (sometimes): Vignettes for N.J. (2017), incorporating framed photographic prints, notebook transcriptions (2005-17) and related sculptural elements. The title references an installation by the Madrid-based, Australian artist Narelle Jubelin (Trade Delivers People, 1990-98), first shown at the Aperto section of the 1990 Venice Biennale, and now held in a private collection. The artist notes how 27 years ago Jubelin was roaming similar terrain via a sequence of objects which explored “the idea of currency – hard currency, cultural currency, symbolic currency and even human currency”.[iii]

In Newell Harry’s work in Venice and now here, photographic prints and archival ephemera are an important expression of these ideas, and like Jubelin’s work they can be read in multiple ways. Although viewers may be tempted to see them as literal documentary narrative, they are drawn from diverse travels and time periods, spanning the past twelve years. The artist has commented that many of these compelling monochrome images were not taken with exhibition in mind, and were a by-product of other investigations, accumulating into a fragmentary archive of moments, assembled to explore, in his words “… the gap between things, the lost and found, the known and unknown, and a will to give prominence to the overlooked and undervalued”. This disjunctive narrative is further enhanced by the introduction of texts drawn from his journals, sometimes related to the photographic image, sometimes not. In these, the first date and place contextualises the image, the second is that of a journal entry. A related, totemic sculptural structure stands nearby, assembled from objects of unknown provenance, a cryptic sentinel to the photographic tableau.

Also present is another group of works: Archive of a lost South African Modern: Found contents of the estate of Henry M. Waller (Cape Town, 2006), 2017. Here we are presented with abstract paintings, small landscapes and ephemera, some evocative of the artist’s maternal forebears in apartheid-era South Africa. The provenance of these works is left uncertain, part of the artist’s persistent questioning of authorship, value, and authenticity. In conversation he has evoked Robert McPherson’s seminal 1982 installation Where are you now Sophie Holmes, and this may be a clue, not just to this particular ensemble, but to his syncretic methodology overall, expressed through what he describes as “entanglement” – bricolage, juxtaposition, word play and visual non-sequiturs.

A fascination with cultural exchange, trade and exploration has always been implicit in Newell Harry’s practice, and its embodiment within his nomadic and restless existence has been noted by numerous writers. A braided lineage can be traced through the multiple works and exhibitions referenced here, leading us to the current moment, however this should not be confused with linearity. An important aspect of the artist’s practice is his revisitation of fragments from earlier engagements, archives and travels, and the re-combining of them into what one might call ‘anti-narratives’, which aim to disrupt notions of progressive chronology. In this sense, purely formalistic readings of his works overlook their post-conceptual framing, rooted less in studio practice than in the small-scale ephemera of itinerancy – notebooks, drawings, photographs and journals – and in discourses around cultural displacement, translocality, and decolonization. However, while deterritorialisation and globalisation are recurrent tropes in contemporary art worldwide, Newell Harry’s practice is equally engaged with the local – with deeply situated cultures, histories, communities and individuals across the Asia-Pacific and Southern Africa.

Perhaps it is this sense of authentic connection which gives Newell Harry’s installations their affective power.  In their presence I am sometimes reminded of artists like David Hammons, Jimmie Durham (both USA), and the late Joseph Beuys (Germany), who, through some magical touch of placement and juxtaposition, have the ability to imbue found and ‘poor’ materials with great visual potency, haunting metaphors for unknowable worlds beyond the white cube.

(David Corbet is an independent researcher, writer and curator based in Sydney, Australia).

Known / Unknowns is dedicated the artist’s late grandmother, Lily Elizabeth Green (1923 -2017). The artist wishes to thank friends and family here and abroad with particular note of Aunty Valerie Green for her support. A special word of thanks and deep gratitude is also owed to Francesca von Habsburg, Markus Reymann, Ute Meta Bauer, Steffi Hessler and the team and crew of TBA 21 and Dardanella. A big thank you also to Thomas Rentmeister & Birte Bosse, Dr. Su Ballard and David Corbett. Finally, warm thanks to Roslyn & Tony Oxley and the gallery staff for their support, patience and assistance.