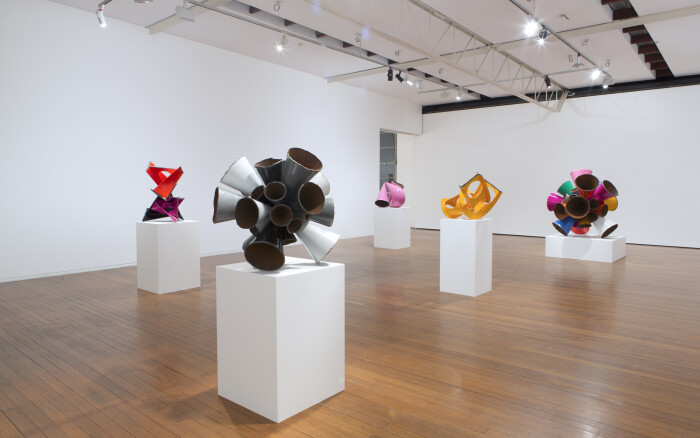 These recent sculptures are speculative remixes of existing forms; it’s important to understand all of this new work as figural. The mobile borrows from the vernacular and materials of early childhood education, as other sculptures borrow from geometry and the language of construction. They are psychedelic and theoretical, but also representations of real things in the world, masquerading as modern abstract sculpture and wedged into the gap between what something is and how it should appear.

A castellated I-beam, named after a resemblance to castle turrets, is a structural member made lighter and more efficient because of a pattern of repeated cutouts. These voids extend along the part of the beam known colloquially as a web. It’s a term that takes on a double-meaning in this sculpture, in which a castellated I-beam has been trapped in a knot of its own making. It is the very form of the web that prevents its untangling.

If beams come from the language of civil engineering, then perhaps joints are the grammar. The orthogonality of I-beams bolted together is strangely comforting. It signifies solid ground and stable markets. Today architects aspire to build gravity-defying facades but it’s really all about appearances; the underlying connections are fundamentally the same as they’ve been for centuries but observed at a micro level, the stakes change. Reconfigure a bolted joint with curvilinear surfaces, in this case hyperbolic paraboloids, and suddenly we are at sea. An engineer might describe these as torsional distortions or vibrations and a sign of collapse.

Polychromed steel pipes have increasingly become part of the language of cityscapes since the nineteen seventies, when the newly built Centre Pompidou wiped the palette of architects clean. Richard Rogers and Renzo Piano famously applied colour to an inside-out structural design in order to emphasize both the way the building was constructed and the pipes which service it. The colours share a logic with city building codes, which require identification of the various contents of service pipes: water, electricity, gas, and so on. In several of these new sculptures the palette has broadened to become, alternately, fantastic and colourblind. The components are drawn in exaggerated single-point perspective, severed mid-expansion as their scale shifts between skyscraper facades and domestic plumbing hardware.

It’s worth remembering the difference between size and scale. Placed next to buildings, these sculptures are smaller in size, obviously, but the scale of the composite parts is identical. However the mobile-as-sculpture is taken from a small world and made larger. It’s unusual in my practice to make an artwork from a particularly private experience, yet it is precisely the two-way street between the personal and the public that underscores the meaning of the work.

Shortly before the birth of my daughter last year, I decided to take some time to make a mobile for her cot, as I had done before the birth of her sister. Once again, I found myself making a sculpture to calm my nerves and express my hopes for their future. It seemed like an opportunity to step back from the studio and play with a few simple formal ideas. The studio, when it’s working well, forms a continuum with everyday life, and it wasn’t long before the mobile re-presented itself as the subject for a new large sculpture.

With apologies to Sol Lewitt, whose work often helps me understand what I’m doing, I decided to follow an irrational thought absolutely and logically. I worked by hand with papier mâché, a moldable craft material of children and carnivals with organic physical properties that are difficult to control. Mudding it into simple polygons, the chaos was intoxicating. The ad hoc textures of kindergarten arts and crafts became a template for my anxieties about objecthood, materiality and how things might still be made by hand today, but also, importantly, in the future. And so this oversized child’s toy emerged and I found myself asking, how large can love be?

James Angus has been exhibiting with Roslyn Oxley9 Gallery since 1993. His work is held in major public and private collections in Australia and overseas, including the National Gallery of Australia, the National Portrait Gallery, Canberra and the Museum of Contemporary Art, Chicago. In 2015, Angus was commissioned by the Monash University of Art, Victoria to produce Built Unbuilt Unbuildable outside the Green Chemical Futures building at Clayton. James Angus has completed several other major public commissions that include Mobile at the Lady Cilento Children’s Hospital, Brisbane (2014), Day In Day Out at 1 Bligh Street, Sydney (2011), Grow Your Own at Forrest Place, Perth (2011), Geo Face Distributor at the National Portrait Gallery, Canberra (2009) and Ellipsoidal Freeway Sculpture, on the Connect-east freeway in Victoria (2008).

In 2014, Angus was selected for the 19th Biennale of Sydney, You Imagine What You Desire, curated by Juliana Engberg. In 2006 he had a solo exhibition at the Museum of Contemporary Art in Sydney curated by Rachel Kent which toured in 2007 to the Institute of Modern Art in Brisbane, Bendigo Art Gallery in Victoria and the Art Gallery of Western Australia in Perth. The 13th Biennale of Sydney (2002) featured his monumental work Shangri-La, a full-sized hot-air balloon suspended upside down inside the Sydney Opera House. The works of Angus were also included in the Changwong Sculpture Biennale, SouthKorea, in The Age of Influence at the Museum of Contemporary Art, Chicago (2000) and Unfinished History at the Walker Art Center, Minneapolis (1998). In 1998 Angus completed a Masters of Fine Art at Yale University as part of a Fulbright Postgraduate Award. This will be Angus’s eighth solo exhibition at Roslyn Oxley9 Gallery.