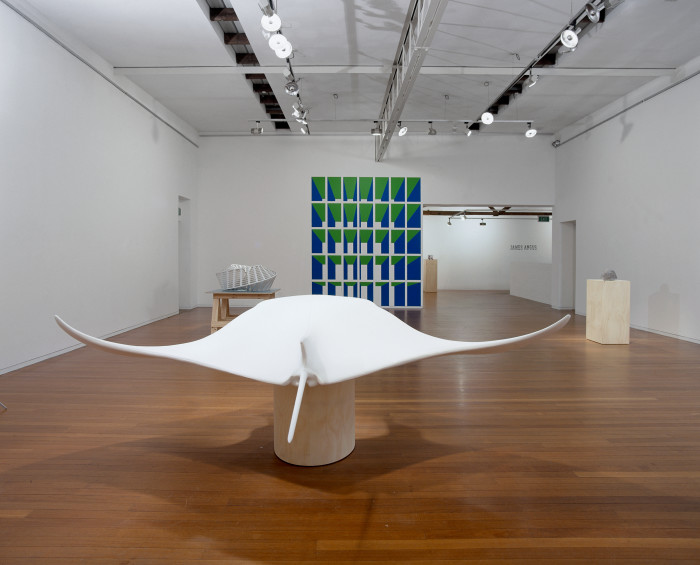 Given adequate numerical data, an original form may be reproduced in a literal way, using a sort of objective, analytical realism. Nature works like this when it replicates, from a hidden master plan, the geometric structure of a cell or an entire organism. For some years now, James Angus has been using an advanced system of co-ordinate geometry to make sculptures that map the forms of a range of seemingly unrelated things: familiar manufactured objects, iconic architecture as well as animals that are notable for their bizarre or extreme morphology. In his current exhibition at Roslyn Oxley9 Gallery, Angus continues to bring such disparate objects together in order to demonstrate that geometry does not discriminate between animate and inanimate things. Our awareness of this equal treatment has become heightened in recent times with the immense increase in the speed with which information is now processed. Today, unique objects are reduced to raw informational value so they can be manipulated according to our various whims or needs. Angus makes explicit the repercussions this new consciousness of plasticity has for our visual culture. He shows us how this change in the way we see things has coincided with a new attitude to objects on the whole, a new concept of what we consider a thing (biological or manufactured) to be.

After selecting an object, Angus remodels it in order to demonstrate its underlying structural plasticity. He maps its form in a precise, mathematical way and then plays with it by applying various relation-altering equations. Working with basic physical concepts, he inverts forms, turns them inside-out or multiplies and off-sets them. He subjects them to extreme, hypothetical forces and shows us the object's response to this treatment in a clean, neutral, medium. For example, in the current exhibition, with his Palazzo della Civiltà Italiana, Angus takes a piece of solid, block-like Italian Fascist architecture, elongates it by stacking four copies end-to-end and then twists them into an infinitely involving möbius loop. The monotonous collonades of the original structure stretch and compress to accommodate its newly altered and strangely contorted condition. The robustness and definite stability of Guerini, la Padula and Romano's monolithic 1942 design is transformed by Angus into a curious, shell-like object of elegance and fragility.

Another architectural piece in Angus' current exhibition, a small plexiglass sculpture, is based on Le Corbusier's 1915 Dom-Ino scheme. Intended by the architect as a means to relatively cheap, easily constructed housing, Corbusier's structure of slabs connected by staircases was conceived for mass duplication. Like Angus' earlier Neuschwansteins (1998) and Falkensteins (1999), which are off-set, conjoined doubles of stereotypical fairytale castles, the present work comprises three tiered examples of Corbusier's exemplary modernist design. Each tier in Angus' model is presented in a different primary colour of the additive colour spectrum. By separating red, green and blue in this way, Angus not only multiplies three-fold the physical, built environment but also manipulates the realm of light by separating the continuum of wavelength into its basic constituent parts.

Angus has also reworked his now signature soccerball form—a geodesic structure that relates to both the utopian post-War architectural design of maverick thinker R. Buckminster Fuller as well as to the miraculous geometry of a strange carbon molecule. This time, the soccerball's perfect, near-spherical structure of stitched-up hexagons and pentagons has ruptured and eroded, falling from an ideal into the real world. Whereas the forms of his previous Basketball... (2000) and Soccerball dropped from 35,000 feet (2000) were made by computer modelling, the present slag-like lump of a ball has been cast, in all its imperfection, from a found, damaged object. It is an analogic description of form in decay, contingent upon unpredictable 'accidents' of entropy as opposed to a precise and digitally analytic copy of an ideal.

In the complex world of natural science, variations in morphology between related species or the slow changes in bodily proportion that arise during the course of evolution may be represented by plotting and tracing points on a grid. In the same way, we may record the more transient shifts in structure observable when an individual performs movements such as those involved in breathing, adjustment of posture or locomotion. Indeed, confining geometric analysis to the limits of the body is to impose a somewhat arbitrary and artificial barrier—as the defining forces of physics do not stop there. Adding to his collection of life-sized bizarre animals, like Rhinoceros (1996) and Giraffe (1997), Angus presents us with a major new work: a Manta Ray cast in white plaster. Its great, horizontally flattened, undulating wings are the perfect example of aestheticised geometry and efficiency in design. Angus has faithfully digitally modelled the animal's complex anatomical curves, an articulation of its particular form of locomotion. But, significant for its status as sculpture is that the fluid billowing of the Manta Ray in movement is, in turn, causally related to the physical laws of an enfolding liquid flow. For, as we move around Angus' sculpture, we are virtually incorporated into the same plastic space that it inhabits, within whose co-ordinates we also reside.

—
James Angus was selected for the inaugural Primavera exhibition for young artists at the Museum of Contemporary Art, Sydney in 1992. He completed a Masters of Fine Art at Yale University in 1998 as part of a Fulbright Postgraduate Award. In 2000, Angus was included in The Age of Influence at the Museum of Contemporary Art, Chicago and, in 1998, in Unfinished History at the Walker Art Center, Minneapolis. The 2002 Biennale of Sydney featured his monumental Shangri-La, a full-sized hot-air balloon suspended upside down inside the Sydney Opera House. James Angus is now based in Sydney. In New York, he is represented by Gavin Brown's enterprise. This will be his third solo exhibition at Roslyn Oxley9 Gallery.