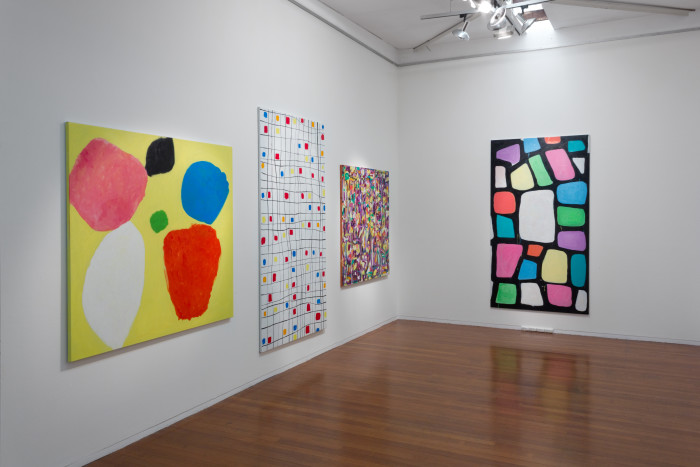 Child 2: "I dare you times a million"

Child 1: "I dare you times infinity."

Child 2: "I dare you times infinity plus one."

“Infinity plus one” is child’s taunt, a paradox, and a mathematical term (in the field of ordinal and surreal numbers). It is also a playful analogy for what Angela Brennan does with paint. For the permutations of abstraction are infinite. They go on and on, but not necessarily in a circular direction. Brennan submits to the endless possibilities of the genre in an intuitive way. Her shapes and colours are not prescribed or precise, but spontaneous, layered and blurred. Circles are squarish and squares appear rounded. Patterns emerge across the compositions but nothing is ever exactly repeated. Instead Brennan navigates the infinite incarnations of abstraction with emotion as her compass, producing canvases that exhibit astonishing stylistic variety.

—
Angela Brennan has exhibited extensively in Australia and overseas since 1989. In 2006 the Monash University Museum of Art, Melbourne, presented a major survey of Brennan’s practice from 1975 to 2006. She has been included in numerous important group exhibitions such as The Ecologies Project, Monash University Museum of Art, Melbourne, curated by Geraldine Barlow and Dr Kyla McFarlane (2008); Snap Freeze: Still Life Now, curated by Jenna Blyth, TarraWarra Museum of Art, Healesville, Victoria (2007); Talking About Abstraction at Ivan Dougherty Gallery, Sydney (2004); and Good Vibrations: The Legacy of Op Art in Australia, at Heide Museum of Modern Art, Melbourne (2002). Brennan has been short-listed for numerous art prizes and her paintings are held in most major public collections in Australia, including the National Gallery of Australia, Canberra and the National Gallery of Victoria, Melbourne. In 2003 Brennan participated in an artist-in-residency program at the Red Gate Gallery at the Beijing Art Academy in China. In 2005, Brennan held her first commercial exhibition in London. Angela Brennan has been exhibiting with Roslyn Oxley9 Gallery since 1993. Infinity plus One will be her tenth solo exhibition with the gallery.