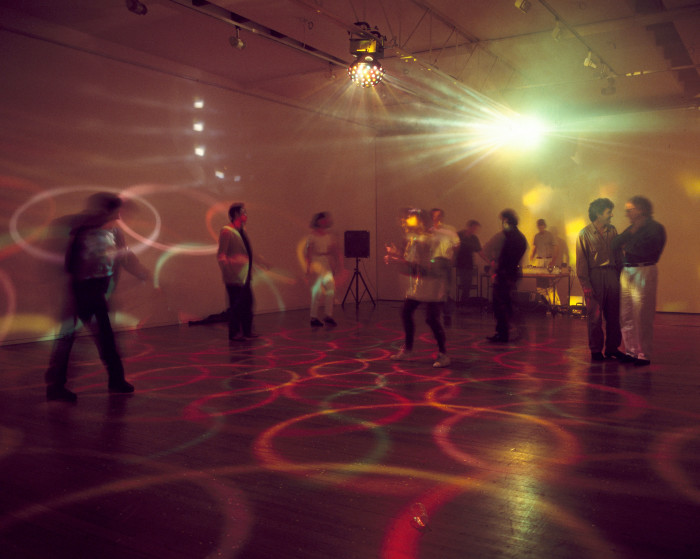 Such is this performance installation.
There is nothing historicist about recycling signs, it has nothing to do with quotations of the early eighties or biologist ideas. This contemporary practice is simply the result of a new configuration concomitant with the completion of the process of "naturalisation" of the image.To recycle images is no longer a significant act, it has become socially determined.

As I see it, the various discourses of science, business, politics, cinema and so on are now at work within artistic practices not as comparable linguistic structures, but as behavioural models.
Doing is becoming more important than saying.
The relation of art to reality is undergoing a major change.
For example, the first level of reality dealt with by the artists is no longer the physical and ideological space of the exhibition venue, but the global networks of communication and production. Another important debate which characterises this generation concerns time, the management and "production" of which is the "last utopian space in art".

The Anxious Object.
Painting ("action painting"), that is, giving power to the act of, was only one particular moment in a much longer process leading towards the autonomy of action in relation to the object.
If the act is as important as the painting, then one must take on board the theoretical conclusion, namely that art generates and "makes aware" behaviours.
Present day art is entirely ethical, but perhaps it is not "aesthetic", and that is the problem. I tend to look at works of art in terms of their economy (the set of relations to the world which they institute) rather than from an aesthetic point of view. The main difference, between older painters, and artists of today lies in the very nature of their action: for us (today) the point is not to confer artistic value or,i a given action but to insert an "artistic" action into a social function. It is the difference between attitude (which defines an artistic territory) and behaviour (which refers to an individual in society). In the practice of artists of my generation, modes of production take on the consistency of ways of life.

What is shown with this installation performance is that there is a kind of reproduction also, that is not genetically determined but cultural, and passed on by imitation, changed, fragmented, until the original, and original reasoning is lost. It is a cultural memory behaviourally aware. It is a challenge for the artist.

Style is merely a residue of thought, never its guiding principle: it reifies thought without bringing it to life.
The changeability of subjects today corresponds to a new conception of the subject that is neither the "consciousness" of classical philosophy nor that linguistic froth, a surface effect produced by structures. The contemporary subject appears to be indistinguishable from specific circumstances, where individual behaviour is determined by the strict dictates of events. It is
structurally "inconsistent".

I would like to stress this idea of behaviour because art is the ideal place where, instead of submitting to a series of pre-existent acts as a means of producing value, one has to invent every link from A to Z before approaching the question of material production. The levelling of language and the levelling of behaviour go hand in hand.

Second Modernity.
The existence of a second modernity that dispenses with the goal of pictorial language, striving instead to establish via the autonomous field of art, new links with the social laws and alternative forms of knowledge. Autonomy was the quest of modernity: today, the quest is to re-establish
the link with society. Yesterdays quests have become today's conventions.
Memory is important. Only its form poses a problem. There is more to memory and art than their monumentality as solid objects and embodiments of form. I believe that contemporary ideology doesn't really want people to forget, and actually encourages commemoration in a big way, although its goal is a memory marked out by solid, neatly arranged 'social' monuments.
The same goes for the history of art in fact ( and thus, our current understandings and misunderstandings). Life is disruptive when its traces, like particular uncertain memories, do not fit into existing categories.
An obsession with monuments is clearly still with us.
But: works of art are transitive. They (should) liven things up. This problem has the merit of challenging the notion of the ontological finiteness of works of art. These are always incomplete, left to be "polished by the viewer". However, any old material object, recording, performance, memory, may be "consistent" enough to spur our spirits to new life.

—Dale Frank, with some notes and responses by Nicolas Bourriaud. (Paris, January 1995)