i wanted to build a bed for all the tired beds 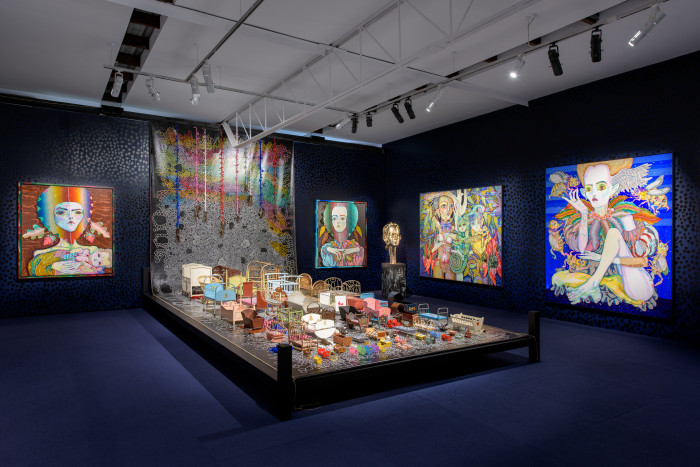 Energy, plenitude, sexual power…the beauty of the world and all that’s in it. And the challenge of navigating this…

Del Kathryn Barton’s world is rich with sumptuous colour; a profusion of scintillating details radiates the busy vigour of creation. Embedded in brilliant patterned fields, the women inhabiting her majestic tableaux are inextricably part of the natural world, growing into being alongside flowers and animals. It’s a moot point where vegetation stops and the women begin – are these upright figures breathing trees of life? Yet despite their physical enmeshment in this verdant growth, Barton’s figures are pictured embodiments of psychic states, of urgent emotional drives on the verge of becoming.

Perhaps being rooted in the earth explains the preternatural focus of these benign spirits, their eyes forever wide open. Notice how alert these women are, hyper-attentive to the point of anxiety: their very stillness suggests the fight-or-flight response. Of course.  Here, in this silent immobility, is the potential for explosive action: each individual face captures one fugitive thought: i am not so different from you, in your inner life…. we are all uncontrollable, says one; i give my radiance to you, intones the glorious all-seeing bloom. There, on the other hand, cast bronze (whether matte black or dazzling golden) fuses opposed energies into solid forms. All are field reports from the emotional frontline.

A woman’s life is full to overflowing…many loves, competing claims, endless tasks. It’s a maelstrom of desires, demands, duties…Take the title of this exhibition: i wanted to build a bed for all the tired beds embraces the responsiveness that inflects every aspect of a mother’s life. While her children inhabit her dreams, she conjures sleep, and the loving shelter of those tiny cradles, floating in the infinite cosmos. They are for children, but also for herself. And any of us willing to join her…

Del Kathryn Barton (b. 1972) has won the Archibald Prize twice, in 2008 with a self-portrait with her two children, and in 2013 with a portrait of Hugo Weaving. Barton recently presented a major survey exhibition The Highway is a Disco at the National Gallery of Victoria, Melbourne (2017-18). In 2012, a solo exhibition of Barton’s work was presented at the Heide Museum of Modern Art, Melbourne. She has also been included in numerous group exhibitions, notably Dark Heart, 2014 Adelaide Biennial of Australian Art, Art Gallery of South Australia, Adelaide (2014); Express Yourself, National Gallery of Victoria, Melbourne (2014); Australia: Contemporary Voices, The Fine Art Society, London (2013); Louise Bourgeois and Australian Artists, Heide Museum of Modern Art, Melbourne (2012); Theatre of the World, Museum of Old and New Art, Hobart (2012); Lightness and Gravity, Queensland Art Gallery | Gallery of Modern Art, Brisbane (2012); Wilderness, Balnaves Contemporary Painting, Art Gallery of New South Wales, Sydney (2010); Feminism Never Happened, Institute of Modern Art (IMA), Brisbane (2010); and Contemporary Australia: Optimism, Queensland Art Gallery Triennale, Brisbane (2009). In 2015, Barton was awarded the AFTRS Creative Fellowship, following on from her directorial debut with The Nightingale and the Rose (2015). This film was presented in Barton’s major solo exhibition Del Kathryn Barton: The Nightingale and the Rose at the Australian Centre for the Moving Image, Melbourne (2016). This exhibition is now touring regional galleries in Australia. Barton was awarded Screen Australia’s Gender Matters funding in 2016 and was selected as a finalist in the 2017 Bowness Prize.

The artist would like to wish special thanks to