I have spread my dreams under your feet 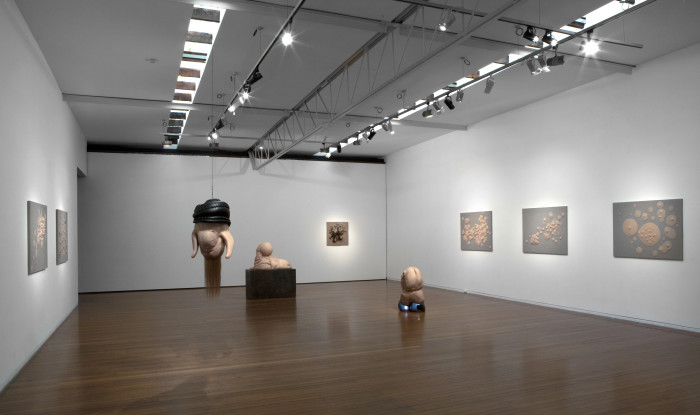 This exhibition reflects on the irrepressible, productive capacity of the organic world. The amazing overflowing fecundity of things, that is both marvelous and overwhelming. This is encapsulated by a new video, From within, that depicts a woman within a cavernous space composed of translucent amber stalactites. She leans forward and begins to disgorge an apparently limitless stream of golden honey-like liquid. It is simultaneously beautiful and disturbing, deliberate and serene but going against the deep-seated intuition that nothing good ever comes back out of the body. Honey fascinates me. When we eat it, we are the third creature to have digested it; it has passed through two bees to get to us. It may be the earliest example of humans utilising the unique biological processes of other creatures for their own purposes; an ancient symbiosis between people and bees that displays exactly the sort of the inter-species connections that seem so radical when played out in contemporary science.

Formally, the voluptuous, amorphous, liquid forms and their resulting accretion and accumulation recur throughout the show. We see them in the paintings and in the amorphous fleshy forms of the sculptural works. The paintings come almost automatically, an interplay between silicone’s natural tendency to flow and accrete and my own desire to control it. I mostly use silicone to mimic these material properties of flesh. Like all great mimics, silicone is a paradox; best known for being something else. I have become increasingly interested in the material itself; in the backs of moulds and the inside of castings, in the overflows and errors. I find the spills and drips both fascinating and evocative because in some ways it reminds me of the creatures I create; unlovely and unwanted yet beautiful and irrepressible all the same. In the studio we collect these overflows to keep as tests and to feed back into the process of refinement and increased verisimilitude. However, I see a beauty there that I find compelling and evocative. In the form of paintings, they are abstract but seem to suggest complex micro-structures or macrocosms.

There is a similar abstract corporeality in a group of new sculptures; Ghost, Atlas and Sphinx. These works reflect on the contemporary understanding of the body as essentially mutable. From the very cellular level of organisms to the physical appearance of people, we now expect everything to be changeable to suit our desires. These sculptures are quite instinctive, very much my drawings made ‘flesh’ and as such portray a more enigmatic narrative. The hyperrealism of my sculptural process is subverted by the deliberate anti-naturalism of the forms themselves. There is none of the certainty that you usually find with highly realistic figures. It is hard to gauge whether they are literal or metaphorical. In Sphinx, there is a reference to the use of bodies for production, with the head sheltering what appears to be a human organ. However, this glistening object could just as easily be a large bean or seed. Sphinx is an expression of raw fecundity. It references ancient sculpture which reminds us that the earliest sculptures - the Stone Age Venus figures - were depictions of fertility.

Patricia Piccinini is one of Australia’s most distinguished artists. She has exhibited nationally and internationally for over two decades. In 2011 Piccinini held a major solo show at ARTER - Space for Art in Istanbul, following retrospective exhibitions at the Art Gallery of South Australia (2011) and the Art Gallery of Western Australia (2010). In 2003, Piccinini represented Australia at the 50th Venice Biennale. This exhibition toured to the Hara Museum in Tokyo and the Bendigo Art Gallery. Other recent solo exhibitions include: The Fitzroy Series, Centre for Contemporary Photography, Melbourne (2011); Evolution Tasmanian Museum and Art Gallery, Hobart (2009); Hug: Recent Work by Patricia Piccinini, Des Moines Art Centre, Iowa and the Frye Art Museum, Seattle (2008); and In Another Life, City Gallery, Wellington (2006). Piccinini has been selected for the forthcoming textile’13: UNITEXT in Lithuania (2013) and was represented in the 2nd Asian Art Biennale (Taipei 2009); the Bienal de La Habana, Cuba (2003); the 13th Biennale of Sydney (2002); the Adelaide Biennale of Australian Art, Australia (2002); the Liverpool Biennale (2002); the Berlin Biennale (2001); and the Gwangju Biennale, Korea (2000). Piccinini’s work is held in all Australian state galleries as well as important private collections nationally and internationally. I have spread my dreams beneath your feet is Patricia Piccinnini’s seventh solo exhibition with Roslyn Oxley9 Gallery.