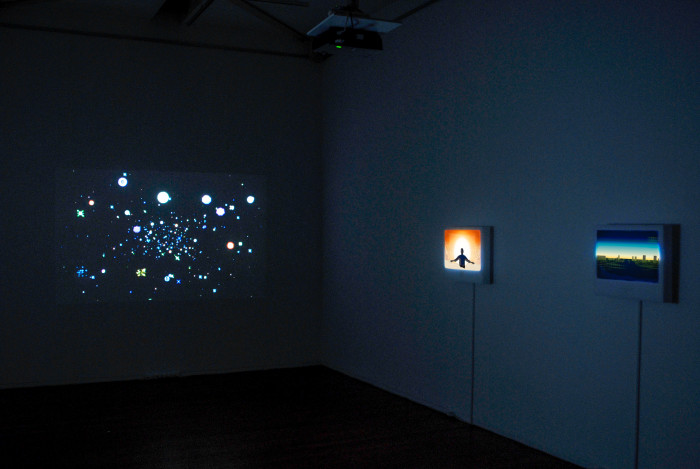 Michael Bell-Smith’s exhibition, Home Mechanics, at Roslyn Oxley9 Gallery presents five landscapes, stops on an exponential journey between outer and inner space. The pilgrimage from place to place reveals parallels between macro and microcosmic scales. One thing we take away from the experience is a sense that we can make ourselves ‘at home’ almost anywhere. It all depends on us zeroing in on the events occurring around us.

The trip of numbers begins beyond the earth’s atmosphere. In Junkfield (Slow, Dense), we move ‘forward’ through space and the only way we can measure our progress—the only coordinates available to us for navigation—are moments of combustion, flowerings of activity that we view, seemingly, from very great distances. As we approach them, the scales of creation, the discrete values of each galactic event, each element of Bell-Smith’s animated kaleidoscope, become apparent. Massive explosions, vortexes, detonations, nebulae and other celestial debris turn out to be comprised of tiny, shifting squares of colour arranged in rosettes and other patterns of varying regularity.

With a shift in scale, we descend through layers of the earth’s strata (Over and Under). Mountains, forests, cities in silhouette scroll by vertically on one of four neat display devices.  Shifting gear again, we encounter (Perpetual Bliss) a grand vista on earth. Sublime mountains merging with clouds, light and sci-fi-romantic spirit. An urban landscape (On the Grid) reduces the scale further still. A more strictly utilitarian field of vertical and horizontal co-ordinates recedes toward the horizon. Space is defined relative to us. The final stop (Smoke Screen) lands us within a field of billowing smoke. We are engulfed and disoriented, unable to get a bearing on things. The passage of time—long or short—is difficult to establish. And carries echoes of the point at which we commenced.