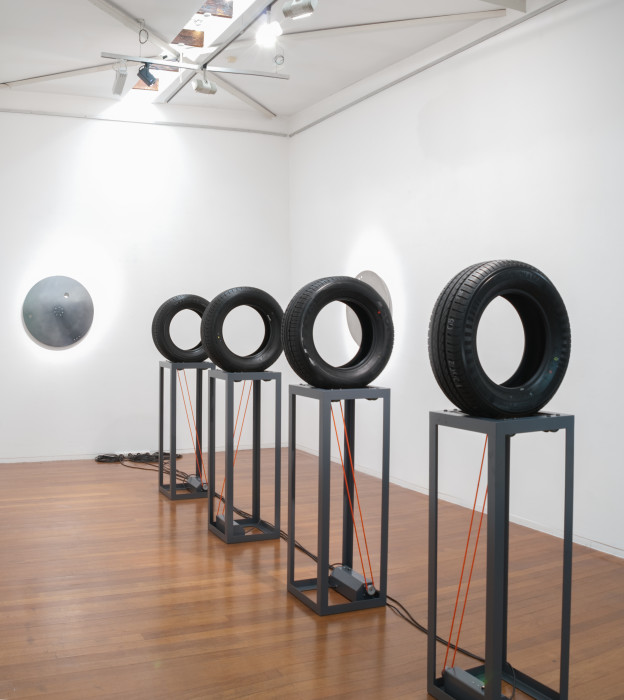 When I was seventeen, I spent the most money I had ever spent on anything on a set of brand new Michelins for my 1966 XP Ford Fairmont. They were beautiful. Black, shiny. Handled really well. Sadly for my nostalgia, there is no Michelin tyre in Marley Dawson’s exhibition. Instead, a roll call of competitor brands selected for their common rim diameters and the appeal of their tread patterns, sidewall markings and other anatomical features. Balancing on welded steel plinths, the circular geometry of the tyres speaks to that of the rectangular prisms of their supports. Rubber speaks to metal. And they smell good.

Five sculptures – Endless Loop (Pirelli) etc – of equal height are arranged in a row down the centre of the gallery. Typical of Dawson’s sculptures, they are kinetic and motor driven. The tyres rotate slowly and constantly on custom made parabolic rollers, keeping them on track. Dawson does not let go of the movements familiar from the workshop machinery that defines his studio. Motion is fundamental to the making of the work and, in part, comprises the work. Lathes, drills, things that spin. Three other kinetic works are mounted to the gallery walls, actively involving the viewer by asking that they manually set them spinning. The High Speed counter-balance disc studies journey seemingly endlessly through 360 degrees, drawing and redrawing their circumference and its interior until, eventually, eventually, driven by inertia, they come to a stop. Ball-bearings in concealed metal races relieve friction from the system helping it to stay in motion.

Dawson’s tyres – the Endless Loops -- rotate upon their own axes (like the earth). By contrast, their individuating features (sidewall markings, tread patterns) originally determined by specific technical requirements become incidental decorative details. These details revolve orbitally around their object’s centre (like the earth’s orbit around the sun). Differently again, the face markings of the High Speed counter-balance disc studies, relate directly to the object’s ability to balance. These are more analytical works than the Endless Loops. Their markings are functional. The large holes drilled by Dawson at arbitrary points have been read by computers in relation to the disc as a whole and a grid of countersinks has been drilled to correct the balance based upon the weight of the removed steel and the radial distances from these holes to the disc’s centre. Thus the object does not favour a top or bottom. The result is a smoothly spinning body, unimpeded rotational movement descriptive of this most simple geometric form.