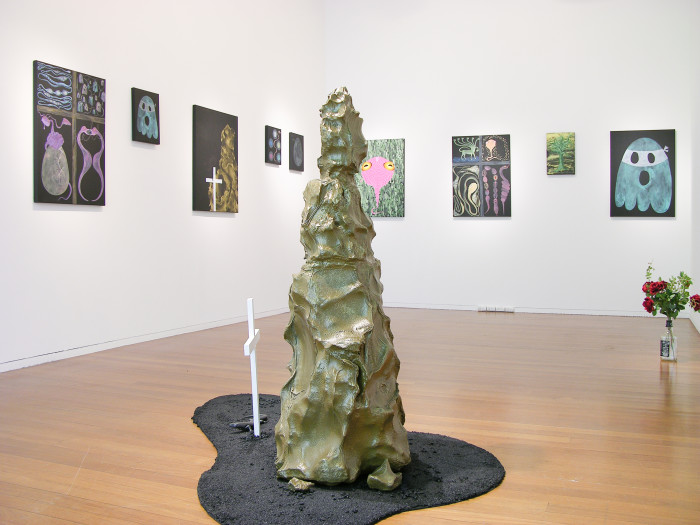 That teenagers get killed in cars is a statistical given. Fate tallies the magnetic attraction of death. Kids catapult along bitumen like suckers for punishment. Right on target, in the thick of it, Nell grew up in Maitland NSW, not far from the industrial town of Newcastle. (live according to rock music—have fun at all costs—clock-up some big ones—witness life spin out—see them all lose it) But, happily, Nell escaped more-or-less intact and made for the big smoke … Once upon a time ...

An apparition, sort of headstone, sort of spectral presence, rises up from a slab of freshly laid bitumen in the centre of the gallery. Right nearby, a home-made wooden cross, symbol of Christian martyrdom, marks the spot, formalising it. It is both a memorial and a warning to drivers-by that this is where something ended prematurely, that things got out of control here and that something was lost. The title of this work, Am I Ever Gonna see your Face Again?, is borrowed from a 1977 rock mantra of the same name. Primal driving music. Classic juke box fodder. Off to the side, cheap red roses sit in a bottle of Jack Daniels (an empty from the night before) like an offering on the altar of a tender trash heap. Along with the black lizard, they complete the picture that hovers between three-dimensional landscape, portraiture and still life.

Freeways grant you access to the Australian landscape. (It’s all elemental out there.) They let you travel fast from A to B like a metaphor for life. It’s difficult to keep your mind focused on the road when driving long distances. Strange meditation. The monotony of the task at hand frees the mind up for other imaginings. A group of dark acrylic paintings hang on the walls around the grave. Images of other worldly beings from the other side, things that have erupted through the manifold. At once talismans of life and premonitions of death, ghouls, grotesques and serpents of various scales supervise the scene. Frescoes of the terrible visions that tempted and tormented St Anthony translate naturally into rock album covers and coy computer game graphics. Nell manages to bring seemingly incommensurate things together. Her work titles read like an i-Pod play list mixed with rock ‘n’roll esoterics. Her repertoire of bands—The Angels, Nirvana etc.—to which she pays homage double as an index to Christian metaphysics and new-age jargon.

Nell’s installation, Am I Ever Gonna See Your Face Again?, in the current exhibition was commissioned by Newcastle Region Art Gallery for the exhibition Auto Fetish—The Mechanics of Desire in 2004. Nell was selected for the inaugural survey exhibition 2004—Australian Art Now at Federation Square—National Gallery of Victoria in 2004; In 2003 Maitland Regional Art Gallery held a solo exhibition of Nell’ s work to launch their new Contemporary Gallery. In 2002 she exhibited the work Fly as High as Me in a two-person show in the Contemporary Project Space at the Art Gallery of New South Wales. In 1999 she was selected for the Primavera exhibition of young art at the Museum of Contemporary Art, Sydney curated by Rachel Kent. In 2003 she was awarded the Rome Studio by the Australia Council for the Arts. Nell was a founding director of the Sydney artist-run space, Rubyare (now Gallery Wren). Happy Ending will be Nell’s fourth solo exhibition with Roslyn Oxley9 Gallery.