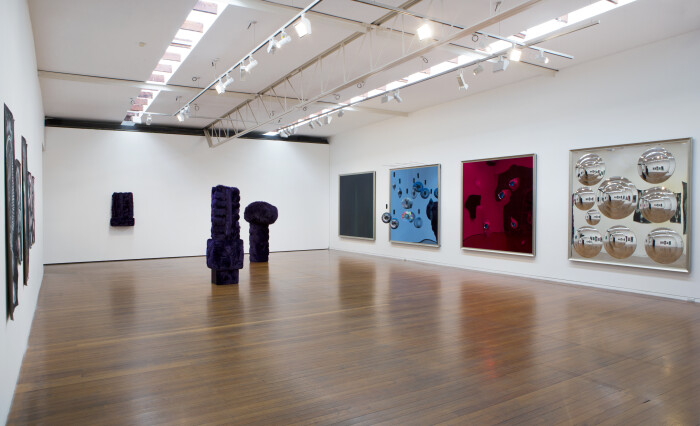 This show brings together the work of four of Roslyn Oxley9 Gallery’s most established artists. With decades of cumulative experience between them, the exhibition showcases the creative force of their new work, as these artists continue to challenge, surprise and impress audiences in Australia and abroad.

Tony Clark’s new work continues his intermittent engagement with portraiture as a vehicle for sculptural painting. The dramatic ‘grisaille’ palette of the work recalls elements of his recent body of work, Jesus (2014). However, distinct within this new series of paintings is the evocation of a new subject – Renaissance portrait jewels. Hypothetical forms that are practicably possible, Clark’s new work integrates references to renaissance jewellery design, depicting luminescent pearls, patinated bronze and micro-mosaics in speculative, decorative compositions. In this, the work gestures to connections beyond the picture plane, to objects that are yet to be realised.

Dale Frank is widely recognised for his masterful manipulation of the material of painting. His new work further experiments with surface, having moved from works created on canvas to employing acid and varnish over a base of plexiglass. In this new body of work, Frank returns to the medium of installation, incorporating kinetic figures and optical illusions in the creation of a scintillating surface.

Kathy Temin describes her work as “[engaging] with materiality, scale and site specificity to make sculptural objects and installations that encourage new readings of familiar materials in an unfamiliar form.” Combining monochrome, materiality and art history with references to suburbia, Temin discusses her new work as follows:

“I have worked with synthetic fur as a material because it refers to the exaggerated emotional content in soft toy imagery, the human and the animal body and challenges ideals of taste. I have combined sources that are not normally associated together to generate new readings, including: minimalism with sentimentality, humour and pathos, remembrance and play.

In these new works the shelf, the plinth or support structure becomes an integrated part of the object. The cat scratcher, indoor planter boxes, topiary, chesterfield, and references to classicism combine the past with the present. Colour and material can be locators of a time and place, for instance purple references both 1970s suburbia as well as the confessional booths in Italian churches.”

Jenny Watson’s art practice is known for its sensitive deconstruction of the painting surface, and unique use of tactility and symbolism. Watson’s new work was made in both France and during her time as artist-in-residence at the University of Wollongong. Having collected velvet furnishing fabrics and organza during recent visits to France, she sourced old-fashioned underwear silk with fellow artist Madeleine Kelly at Wollongong University, before making the additional work under the campus trees. Watson’s new work is infused with these memories and a sense of dislocation, creating an atmosphere where Troyes, Anvers, Marnay-sur-Seine and Wollongong are interlaced.