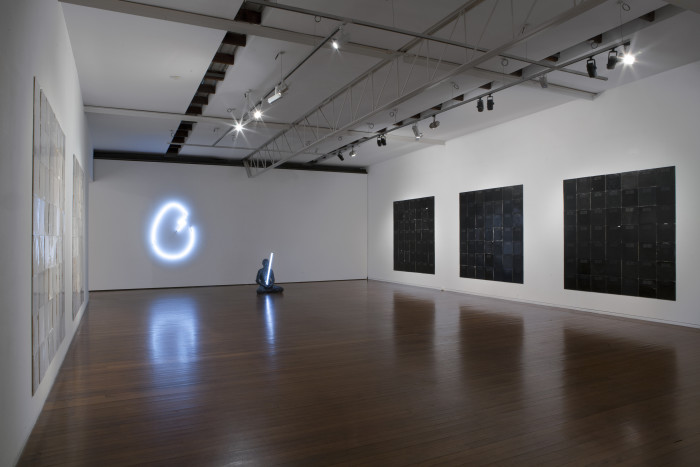 Nell's GRAVEST HITS is a compilation of chart toppers. Her signature motifs and symbols have been collated into one exhibition, rock n' roll style. The title suggests resurrection from the grave, and many of these works have arisen from a metaphorical ground, from a rich compost of ideas. Iconic images and symbols are recycled and objects with past lives are re-incarnated.

The title is also an homage to the The Cramps first EP, Gravest Hits, which included the track Human Fly. For Nell, the fly is a kind of totem, a stand in for herself. The fleeting life cycle of the fly symbolizes the transience of life. Nell's new video work SUMMER documents the destruction of a human-sized plastic fly with a cricket bat. Here Nell is recycling a sculptural work (Fly as High as Me, 2002), and in the process, she is challenging the emotional burden of the past. The giant fly is violently and spectacularly put to death, but as a result, a new work is born. It is catharsis with a cricket bat. The title, SUMMER, suggests the march of the seasons and points to the cyclical nature of life. Similarly, a Nell-sized neon egg is cracked by a bolt of lightning, incorporating both destruction and new life into one form.

Kobyashi Issa said 'where there are humans you'll find flies – and Buddhas'. In Nell's version of the bodhisattva’s quote, flies have descended on Auguste Rodin's The Thinker. Her playful addition of fly stickers to the canonical sculpture is a humorous take on art history, spirituality and decay. If you sit still for long enough, you will gather flies. Opposite the doubled Thinker is a three-dimensional meditative figure cloaked in flies. Another ‘Nell-sized’ object, this woman sits in the lotus position with a fluorescent light emanating from her core. In contrast to her reflective position the figure's skin is crawling with flies. Like a beekeeper that is able to be engulfed by bees without being stung, Nell's meditating figure covered in flies appears to be at equilibrium with nature.

The repetitive act of collecting multiple examples of the same object is meditative and ritualistic. In More Sound Hours Than Can Ever Be Repaid, Nell has obsessively collected the record covers of two iconic albums: AC/DC's Back in Black and The Beatles The White Album. "Acca Dacca's" Back in Black is an iconic part of Australian rock history, and The White Album has an art historical pedigree: it was designed by British pop artist Richard Hamilton to mimic the look of conceptual art. Nell's minimalist arrangement of the record covers opposite each other in uniform grids allows the past histories of the objects to speak. Although born the same, they bear witness to the unique events of their lives through watermarks, creases, ringmarks and annotations. They have been loved. In this way the series is also a tribute to Mike Kelly’s soft toy wall hanging, More Love Hours Than Can Ever Be Repaid, 1987. The contrast of black and white, Australian and British, continues the duality that is present across the rest of the works in GRAVEST HITS.

People often find Nell's practice difficult to categorise. Her work traverses performance, sculpture, music, and painting. Small, intimate objects are just as probable as immersive installations. For Nell, it is because she is 'different every day'. Her diverse life experiences include small town culture, Buddhism and rock n' roll and her work reflects these varied elements. Nell’s material vocabulary may be astonishingly broad, but her style, her Nellness, is quite singular. Universal symbols, simplicity, and the elegant conjunction of two ideas define her work.

GRAVEST HITS is Nell’s seventh solo exhibition with Roslyn Oxley9 Gallery. In 2012 the Maitland Regional Art Gallery held a solo exhibition of her work titled, Hometown girl has wet dream. In the same year the Museum of Old and New Art in Tasmania (MONA) commissioned a performance and installation for the festival MONA FOMA. Nell was also selected for Theatre of the World, at MONA (2012). She was also selected to curate ARTBAR at the Museum of Contemporary Art, Sydney (2012). Nell collaborated with the Australian fashion label, Romance was Born, on their Spring/Summer 2011 collection, presented at Australian Fashion Week. In 2008 Gertrude Contemporary Art Space held a two person show of Nell’s work (with Michael Zavros) titled, There Goes a Narwhal. Nell was selected for the inaugural survey exhibition 2004 – Australian Art Now at Federation Square, National Gallery of Victoria in 2004. In 2002 Nell exhibited her work Fly as High as Me in the Contemporary Project Space at the Art Gallery of New South Wales. Her work is held by the Museum of Contemporary Art, Sydney, the Museum of Old and New Art, Hobart, The University of Queensland Art Museum as well as numerous private and corporate collections nationwide.