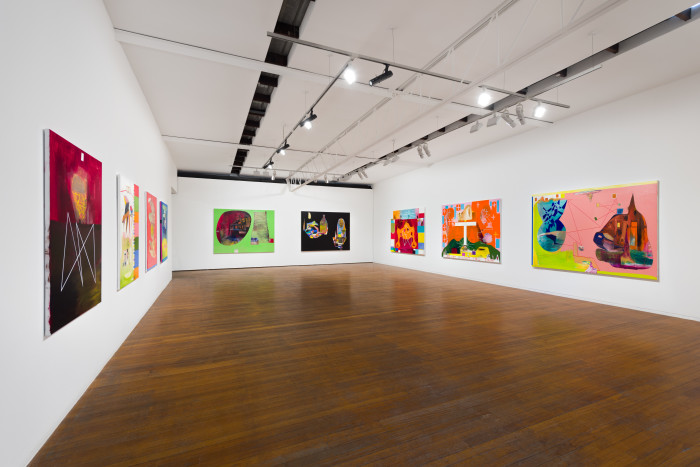 Sansom, as ever, stands apart. His paintings may be beautiful, in a mercurial kind of way, yet beauty is but one of their many strengths. These are urgent works of art that dare to describe the workings of the mind. They are large, cacophonous, unstable and sometimes quite terrifying.
—Sebastian Smee, Pulitzer Prize-winning critic

Roslyn Oxley9 Gallery is thrilled to present new paintings by Gareth Sansom in a special solo exhibition marking the gallery’s 40th anniversary. Sansom was the inaugural exhibition when Roslyn Oxley9 Gallery first opened in March 1982. Forty years on, Sansom continues to be one of the few truly original voices in contemporary Australian art and has always remained a hardcore iconoclast.

Sansom is one of Australia’s most revered painters, a pre-eminent figure of the Australian avant-garde for over fifty years. Eschewing his traditional love of montage, the artist relies on eccentric mark-making and belligerent colouration. Sansom came to prominence in the 1960s as a radical convention-breaking painter, with influences ranging from Picasso and Jean Dubuffet to Francis Bacon and British pop art. Sansom’s luridly coloured and densely layered paintings explore physical, psychological and material transformation; they begin as one thing but swiftly morph into another.

In this impressive suite of thirty-one new paintings, Sansom rallies against his own control and consciousness in his work – he aspires to constantly surprise and challenge himself as an artist. The psychological landscapes in ‘Gareth Sansom’ marry not only abstraction and figuration but also entirely different visual registers, from photography and stencilling to diagrams, caricatures and writing - the result is a surreal, dazzling cacophony of lyrical effusion.
—Claire Vis-Le