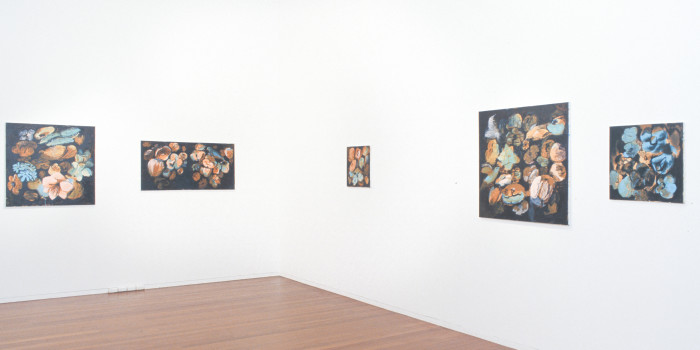 Flowers are the ubiquitous motifs of the decorative arts. In their natural state, they are phenomena of astonishing order and symmetry. Flowers inspire us with their exclamations of colour and the perfect arrangements of their parts. They exemplify our concept of beauty. The constant importation of flowers from the natural world into the transformational realm of surface embellishment demonstrates how salient flowers—both as functional things and as images—are for us. Flowers lend their forms readily to the abstractions, generalisations and mutations that the imagination performs in the production of ornamental design. They seem somehow predisposed toward the imaginative flux, the seemingly occult field in which decoration coalesces. Flowers are the exception to the otherwise blanket legislation against the production of graven images in Islamic and Jewish culture. In the decorative arts, the unexpected appearance of flowers as incidental details adorning objects provides us with pleasure as our awareness of their presence there filters in to our conscious lives without demanding much of our attention. In this way, flowers are the exemplary subject of the minor arts.

Tony Clark's current exhibition at Roslyn Oxley9 Gallery consists of a series of small, mostly square paintings of loosely painted floral forms in a restricted acrylic palette. Clark describes crude forms that we designate 'floral' but not 'flowers' due to the abstraction to which they have been subjected. These flowers have lost, via the chain of processing (decorative trivialisation and transformation and the subjective selectiveness of memory), much of the specificity and uniqueness, the particular characteristics of their original, natural models—to which they now, only remotely, refer. Birds also appear, here and there, in the paintings but only as quaint accessories to the more dominant floral theme. And these generic and generalised forms degenerate at the periphery of Clark's canvases, into a blotchy and scratchy complex of abstract brushstrokes.

Clark chooses his subjects from the low genres of art history and finds ways of painting them that gives him, the 'abstract' painter, license to do so. To render his floral designs, Clark has chosen a reduced and distorted palette—a signature Clark device. These are not colours with which one may closely reproduce the appearance of the external world. In the present series of paintings, he has returned to the three skewed 'primary' colours, light blue, portrait pink and raw sienna, together with black ink, that he used in some of his myriorama landscapes of the early 1990s. These colours, which Clark applies unmixed, are like a caricature of a more varied and faithfully mimetic colour scheme. And the resulting pictures are suggestive of both designs for three-dimensional relief sculpture as well as styles of painting that invest in the brute argument of exaggerated modelling.

Caravaggesque tonality historically has been a popular rhetorical device in painting, stalwart of the didacticism of christian depiction of biblical narratives. It communicates to the faithful masses. Strong light and dark contrasts are used to trigger a definite and felt response in the viewer, giving the represented subject the gravity and weight of meaningfulness, authenticity. In Clark's exhibition, floral forms loom from obscure darkness, thin inky blackness. The dark shadows are an emotional space. He has combined the hyperbolic and muscular Caravaggesque style with the generalised and abstracted, 'lite' floral motif in the creation of decorative melodrama.

Tony Clark has lived for much of his life in Italy. He has exhibited widely in Australia and Europe in a career of more than two decades. A major retrospective exhibition of his work, Tony Clark -- Public and Private Paintings 1982-1998, was held at the Museum of Modern Art at Heide in Melbourne in 1998. Among the many important museum exhibitions in which he has been included are Documenta IX in 1992 and the 1995 Australian Perspecta. His work is held by the Art Gallery of New South Wales, the Museum of Contemporary Art, Sydney, the National Gallery of Victoria and the Art Gallery of Western Australia as well as many private collections in both Australia and Europe. Tony Clark has been exhibiting with Roslyn Oxley9 Gallery since 1983. Flowerpieces will be his tenth solo exhibition with the Gallery.